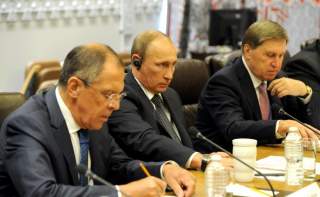 For all of the understandable focus on the future of U.S.-China relations, no bilateral relationship is more important to the United States in 2015 than the relationship with Russia.

Moscow’s foreign policies exacerbate—and, in some instance, are the very causes of—several vexing issues currently facing U.S. decision-makers, from Moscow’s 18-month old intervention in Ukraine to its harboring of Edward Snowden to its military support for Syria’s Bashar al-Assad.  Yet if the Obama administration has a coherent strategy for dealing with Russia then it is certainly well hidden from public view.

When Obama came to office, relations between the U.S. and Russia were perhaps the poorest they had been since the collapse of the Soviet Union. Relations were plagued by Russian opposition to a missile defense system in Eastern Europe; Kosovo’s recent declaration of independence from Russia’s historic ally Serbia; and lingering uncertainty over whether NATO would continue to expand eastward, a question brought to the fore by the Russo-Georgian War of August 2008.

An early goal of Obama’s presidency was to put U.S.-Russia relations on a sounder footing, an ambition announced in public just two months into his first term when Secretary of State Hillary Clinton famously presented her Russian counterpart Sergey Lavrov with a button emblazoned with the word “reset” (in English, at least). By spring 2010, the diplomatic offensive was beginning to bear fruit: the New START arms control agreement was formally signed in April of that year and Bush-era sanctions against Russia were lifted the following month.

Obama’s rapprochement with Russia proved to be relatively short lived, however.  In particular, Russian fears about possible NATO expansion were never fully allayed. When Vladimir Putin returned to the Russian presidency in May 2012 he made no secret of his plans to pursue a Russia-dominated “Eurasian Union” as a counterbalance to the West. And although Obama had succeeded in bringing Moscow to the table over nuclear arms control, Russia’s conventional forces were heavily bolstered under both Putin and the caretaker presidency of Dmitry Medvedev.

Setbacks to the relationship abounded throughout 2012. Not only did the Russian navy and air force conduct provocative military exercises in the Pacific and the Gulf of Mexico, but a high-profile diplomatic fallout saw Putin introduce a ban on U.S. citizens adopting Russian children in response to the Obama administration’s sanctioning of Russian human rights abusers.  By July 2013, when Russia agreed to grant asylum to Edward Snowden, few could disagree that the “reset” had been a comprehensive failure.

Russia’s invasion of Crimea in March 2014 and subsequent interventions in Eastern Ukraine have been the dramatic climaxes to this breakdown in relations, making it terribly difficult (although perhaps not impossible) for Obama to publicly pursue a renewed rapprochement with Russia for as long as Ukraine’s territorial integrity is being violated. But at the same time, the Ukraine crisis is really a symptom of the badly deteriorated U.S.-Russia relationship and not an independent cause of it. If U.S.-Russia relations had been sturdier in late 2013 and early 2014—if Russia believed that the U.S. would be willing and able to halt its aggression against Ukraine, for example, or alternatively if the two countries were operating on a cordial basis—then the political crisis in Ukraine might never have happened, and certainly could have been contained more easily than it actually was—or wasn’t, as the case may be.

The truth is that, on Obama’s watch, the United States has been relatively ineffective at shaping the decision-making calculus of Putin. Certainly, Putin will have given little thought to American sensibilities or interests when he sanctioned the annexation of Crimea. Of course, the point is not that President Obama ought to be blamed for not exercising complete control over his counterparts in foreign capitals. No president can or should be held to such an unfair standard.  But it is the job of the U.S. government to adopt a coherent policy towards even the most antagonistic of adversaries. So how should Obama deal with Russia now that his initial preference for a cooperative relationship has been frustrated by Russian intransigence?

Analysts offer competing answers to this question. Some argue that Putin, while volatile, is nevertheless the president of a state in steep decline. With the price of oil having tanked, the gap will continue to grow between Russia’s corrupt and undiversified economic system and the more dynamic economies of the United States and Western Europe (not to mention India and China).  Waging an all-out confrontation with Russia now is therefore ill-advised because a better bargain could be struck with Moscow tomorrow than can be reached today. Strategic patience is the order of the day, especially in Ukraine, where Russian power (and willpower) will inevitably evaporate even without serious prodding from the West.

On the other hand, Russia’s relative decline might actually be the cause of Moscow’s aggressive foreign policies. For if Putin believes that he is in command of a declining state, then he might reasonably conclude that now is precisely the time to “lock in” strategic gains along Russia’s periphery. If Putin can succeed in establishing “facts on the ground” in Georgia, Ukraine, Syria, and perhaps further afield, then this will make it difficult for Russia’s adversaries to rollback Russian influence in the near future.

Moreover, Russia’s overall economic decline—even if it continues to be borne out—does not mean that funds for ambitious military policies will automatically become scarce. Nor does it mean that the motivation to pursue expansionist policies will recede. On the contrary, in fact, there is ample evidence that Putin’s lack of success on the domestic front actually makes his foreign policy “achievements” all the more critical to maintaining his grip on power.

The United States cannot wish away Russian bellicosity, then, but instead must orchestrate a foreign policy that both contains Russian aggression and deters future acts of expansionism.  So far, the Obama-led diplomatic isolation of Russia—aided by European anxieties about their eastern neighbor—has been somewhat successful in this regard, and economic sanctions have shown signs of significant “bite.”  But history shows that cordons sanitaire of this nature are difficult to maintain over the long term, and might well fall far short of inducing Putin to alter his foreign policy trajectory.

Recognizing this, the Obama administration announced this summer that diplomatic and economic moves against Russia would be matched by the deployment of heavy arms to Eastern Europe and the Baltic states. The rationale was that America’s NATO allies would not feel safe from Russian predation unless there was a credible guarantee that the full force of the U.S. military could be relied upon for their collective defense. In the eyes of most security analysts—and in the view of the America’s allies—this military component was a welcome addition to U.S. foreign policy towards Russia, a critical move designed to impose real costs to future Russian adventurism.

What is unclear, however, is how credible this military balancing against Russia will prove to be in the long-term. The biggest threat to American resolve could turn out to be Russian involvement in Syria, where Russian hardware—including fighter jets—is already being supplied to Assad loyalists with Moscow already attacking targets from the air. The prospect of the U.S. and Russian militaries being at close quarters in Syria is one that the ever cautious President Obama is right to balk at, and undoubtedly helps to explain his recent change of heart in deciding to meet face-to-face with Putin in New York.

Ever since he announced in 2009 that the United States would withdraw from Afghanistan, President Obama has studiously avoided taking ownership of international crises that involve serious military investment.  From Libya to Crimea to Syria, the president’s modus operandi has been fairly clear: do the bare minimum to avoid an absolute catastrophe from the U.S. perspective but never invest enough to resolve the underlying issues.  Assuming that this pattern holds—and there is nothing to suggest that it will not—Obama can probably be counted upon to seek some sort of diplomatic understanding with Russia over the security situation in Syria.  His overriding goal will be to minimize the risk of the U.S. being dragged further into the conflagration.

Might Eastern Europe come up in these bilateral talks over Syria? To be sure, a grand bargain involving Ukraine, Syria and other security issues is extremely unlikely to emerge at this time.  But in order to reach a compact with Putin over Syria, a variety of short-term fixes will surely be on the table. Putin will be probing Obama’s resolve, looking for ways to expand his freedom of maneuver in international affairs. And herein lies the risk: any whiff of U.S. concessions over Syria will bode ill for maintaining a firm deterrent in the European theater. The cordon sanitaire will have been breached; Putin will have been confirmed in his belief that militarism “pays.”

As Henry Kissinger has written, America’s long-term goal vis-à-vis Russia must be to accommodate Moscow within a political and security order that satisfies the legitimate interests of both sides and their major allies. President Obama is likely in enthusiastic agreement with this sentiment, and indeed began his presidency with the stated aim of reducing tensions with Russia—part and parcel of the president’s broader desire to clear his desk of foreign policy problems in order to focus on domestic issues. The problem is that there are no straightforward ways of moving towards a modus vivendi with Russia in light of current events.