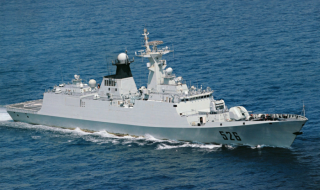 China’s White Paper on Military Strategy published by China’s State Council on Tuesday formalizes the evolution of China’s naval strategy from “offshore waters defense” to a new maritime strategy that encompasses both “offshore waters defense” and “open seas protection.” This shift marks the first formal change in China’s maritime strategy since 1993 and has been made possible by significant improvements in naval capabilities that have enabled China to increase reliance on its navy to protect its expanding national interests.

As detailed in my recently published monograph, “China Moves Out: Stepping Stones Toward a New Maritime Strategy,” China’s maritime strategy was ripe for change. Hu Jintao’s strategic guidance to conduct New Historic Missions in 2004 charged the military to defend China’s expanding national interests and implicitly tasked the People’s Liberation Army Navy (PLAN) to expand operations to protect maritime interests. Strategic emphasis on safeguarding the security of international Sea Lanes of Communication (SLOCs) in the 2012 Defense White Paper made operationalization of “open seas protection” a near-term PLAN requirement. In addition, efforts to improve operational and tactical capabilities in the Western Pacific and its “normalization” of Western Pacific deployments in late 2012 enabled the PLAN to look toward conducting operations farther from China. Strategic guidance to defend China’s interests coupled with enhanced operational capabilities that allow China to meet this strategic directive make now the ideal time for the PLAN to integrate “open seas protection” into China’s offshore maritime defense strategy.

What are the operational implications of this change in strategy? What does it suggest about where the PLAN will operate in the future? Examining how China normalized its deployments to the Western Pacific since 2004 presents a model for how China’s navy will incorporate open-seas protection into its current maritime strategy and suggests where China will deploy its navy in the future.

China’s naval deployments to the Western Pacific began in 2006 and gradually increased in scope and complexity over time. “China Moves Out: Stepping Stones Toward a New Maritime Strategy” suggests the PLAN uses a building block approach to naval operations in unfamiliar waters. The navy first methodically masters fundamental skill sets and then integrates new concepts or capabilities to conduct more complex operations.

China’s navy progressed from deploying three to four ships from a single fleet for scripted exercises in the Western Pacific in 2006 to simultaneous deployments of elements of all three fleets for complex free play Western Pacific training evolutions by the end of 2013. Exercises gradually increased in complexity from one-dimensional anti-surface warfare training to multidimensional exercises involving submarines and fixed-wing aircraft. Just as it incrementally expanded the complexity, scope, and diversity of naval operations in the Western Pacific over the last decade, the PLAN is likely to gradually increase the frequency, complexity and scope of open-seas protection deployments.

Over time, the Chinese navy expanded the chokepoints it used to access the Western Pacific from one or two primary access routes, to using multiple straits and chokepoints to deploy to the Western Pacific. Operations within SLOCs or near strategic chokepoints are consistent with PLAN guidance to protect China’s economic interests, which rely on SLOCs to import oil and other commodities. Hence, future open-seas protection operations will likely regularly patrol along SLOCs and near strategic chokepoints.

PLAN operations in the near seas over the last decade have included political signaling, suggesting the PLAN will be used for this mission as part of a strategy that includes open-seas protection. Signaling includes PLAN ships operating in the vicinity of China’s interests and simultaneously publicizing these operations.

Just as PLAN deployments to the Western Pacific emphasized systems of “informatization” for command and control, PLAN ships conducting open-seas protection missions will possess robust communications capabilities and will be linked together through relatively rapid information flow across and up the chain of command.

The integration of open-seas protection into China’s maritime strategy will present a strategic challenge for China’s navy. China’s navy must continue improving its capabilities to defend China’s national security in the near seas while simultaneously conducting open-seas protection missions that will draw navy resources to the far seas. Nevertheless, PLAN experience conducting long-range counterpiracy deployments in the Gulf of Aden, coupled with the normalization of deployments to the Western Pacific, will enable the navy to rapidly integrate this new concept into China’s maritime strategy. Understanding how China has approached operations in the unfamiliar waters of the Western Pacific since 2004 provides insight into how “open-seas protection” will be integrated into China’s maritime strategy and how it will influence the trajectory of future PLAN operations.

Christopher Sharman is a Navy officer at the National War College. He has worked strategic, operational, and tactical East Asia issues for most of his career including multiple tours with the Forward Deployed Naval Forces in Japan and has served as Assistant Navy Attaché in Beijing. The views expressed are those of the author alone and do not necessarily reflect the policies of the National Defense University, the Department of Defense or the United States Government.