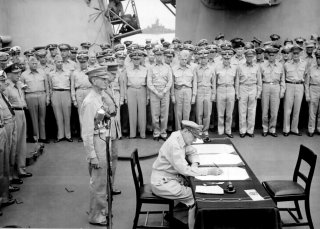 As Congress returns to work next week, it has an opportunity to complete a vital but long-pending project: the awarding of the Congressional Gold Medal to all the American men and women engaged in the early defensive battles against Imperial Japan. For too long their sacrifice has been ignored or merely distilled to the horrific Bataan Death March. This is an enormous simplification that does a disservice to all who did the extraordinary with all the odds against them.

Seventy-seven years ago today, on September 2, 1945, when aboard the USS Missouri in Tokyo Bay, Supreme Commander of Allied Forces Army General Douglas MacArthur signed the Instrument of Surrender, which accepted Imperial Japan’s defeat in World War II. With over 300 ships in the Bay and nearly 800 planes in the air, the Allies’ total might was on display.

Before signing, he called for British general Arthur E. Percival and American general Jonathan M. Wainwright to join him. The two had respectively presided over the historic surrenders by the Allies in Singapore and the Philippines in 1942. They stood behind him as he signed the document five times. MacArthur then waved to Wainwright to come forward and accept one of the pens. He handed a second pen to Percival.

Few now understand the importance of that dramatic gesture. Both Percival and Wainwright had commanded the desperate, early, but unsuccessful defensive battles in the Pacific. In 1942, Japan looked invincible as its troops swept through and occupied Southeast Asia. Japan bombed Pearl Harbor, Hawaii; Darwin, Australia; and even Ellwood, California, with impunity.

Percival and Wainwright suffered the humiliation of the greatest military defeats in their nation’s history followed by years as prisoners of war of the Japanese. Yet the men and women who fought under them had displayed uncommon heroism, resourcefulness, and tenacity. Whereas they did not nor could not then slow the Japanese advance, they were, as President Franklin D. Roosevelt told Wainwright on the morning of the fall of Corregidor, the “shining example of patriotic fortitude and self-sacrifice” that would be the “guarantee of victory.”

Wainwright, skeletal, white-haired, and leaning on a cane, had been liberated, together with Percival, from a Japanese prison camp in Manchuria just days before the ceremony. On the deck of the Missouri, he stood as a visitant representing all the Americans who first engaged the enemy in the Pacific. These men and women acted with extraordinary valor in efforts to stop Japan’s advance with antiquated weapons, too few troops, and no prospect of resupply.

And it is these men and women who have earned a gold medal. We often forget that hours after the attacks on Pearl Harbor on December 7, 1941, Imperial Japanese forces launched coordinated attacks throughout Asia, striking military facilities from Thailand to the Commonwealth of the Philippines. Within days the British and American Pacific-based fleets and air forces were decimated. For the first six months of World War II after the U.S. entry into the war, the Japanese had full control over the air and sea in the Western Pacific. Our troops nevertheless resisted until they had exhausted their resources.

In the Philippines, on December 8, 1941, the “first to fire” at the Japanese invaders were the New Mexico National Guardsmen from the 200th and 515th Coast Artillery (AA) regiments—successors to the famed “Rough Riders” of the Spanish-American War. Assigned to defend Clark Field north of Manila, they found that none of their artillery was capable of reaching the high-flying Japanese planes.

Alongside them was the Provisional Tank Group. National Guardsmen from seven states who had arrived in the Philippines barely a week before the outbreak of war. On that first day, Pvt. Robert H. Brooks, an African American member of Harrodsburg, Kentucky’s Company D, 192nd Tank Battalion became the first member of the Armored Force to die in WWII. He was honored with having the parade field at Fort Knox named after him. At the same time, TSGT Temon “Bud” Bardowski of Maywood, Illinois’s Company B, 192nd Tank Battalion, is credited with bringing down the first enemy plane by a U.S. armored unit in World War II.

At Midway in the first days of the war, First Lieutenant George H. Cannon from Michigan received for “extraordinary courage and disregard of his own condition” the first Medal of Honor to a U.S. Marine in World War II. Although mortally wounded by enemy shellfire, he refused to be relieved until all his men were evacuated, and he had reorganized his command post. On Wake Island, 400 U.S. Marines, 1,200 unarmed civilian contractors, and forty-five Chamorro Pan American Airways employees fought off a Japanese armada for nearly two weeks. Marine Corps aviator Maj. Henry T. Elrod fought valiantly and was the first U.S. pilot to sink a warship from a fighter plane. The Georgian, who was killed on the last day of the battle, received a Medal of Honor for “conspicuous gallantry.”

Action at sea was equally valorous. The U.S. Asiatic Fleet was destroyed with the March 1, 1942, sinking of the heavy cruiser USS Houston (CA-30) in the Sunda Strait. The ship’s captain, Albert Harold Rooks from Washington State, who went down with his ship, received the Navy’s first Medal of Honor for “extraordinary heroism.” Most of the ship’s 300 survivors ended up as slave laborers on the Thai-Burma Death Railway.

Not far from the USS Houston, the Japanese sunk the destroyer USS Pope (DD-225). The ship’s wounded executive officer, Lt Richard Nott Antrim, kept his surviving crew together until rescue three days later by the Japanese. But it was for “conspicuous gallantry and intrepidity” in a Japanese POW camp on Celebes one month later that the Indiana native received the Medal of Honor for saving a fellow POW from a savage beating by stepping forward and offering to take the rest of the punishment.

On the Philippine Islands, in contrast to other Allied encounters with Japan at the time, U.S. Armed Forces under the command of the United States Army Forces Far East (USAFFE) fought a prolonged six-month resistance to invasion. The defense of the Philippines even included, on January 16, 1942, the last cavalry charge in American military history. Led by Lieutenant Edwin P. Ramsey, the action so surprised the Japanese that they broke and ran. After the fall of Bataan, Ramsey became a legendary guerilla leader in the Philippines.

Anticipating the fall of Corregidor and all the Philippines, Roosevelt took the day before the emperor’s birthday, April 28, 1942, to give a fireside talk, On Sacrifice. He used the battles in the Pacific to inspire and energize the American people. He first recounted the exploits of the U.S. Navy’s chief medical officer at Surabaya, Java, Lt. Cmdr. Corydon McAlmont Wassell from Arkansas. Wassell had evacuated from Java eleven severely wounded sailors from the USS Houston and the USS Marblehead (CL-12) “almost like a Christ-like shepherd devoted to his flock” to Australia as the island fell to Japan.

The president ended his talk by recognizing Texan Lt. Hewett T. “Shorty” Wheless, a B-17D Flying Fortress pilot in the Philippines. On December 14, 1941, he maneuvered his severely damaged plane to not only deliver its payload on a Japanese convoy, but also to shoot down six Zero fighters and to land his aircraft riddled with 1,600 bullets on a blocked runway with no landing gear, two engines out, and nearly all his control cables gone. Roosevelt told the American public that this and other extraordinary tales of bravery should not be considered “exceptional.” Instead, he concluded that “they are typical examples of individual heroism and skill” that American had been demonstrating.

And maybe during this time the bravest of all was Alaska school teacher Etta Jones. She was sixty-two when the Japanese invaded the Aleutian island of Attu. On June 7, 1942, they captured her, her weatherman husband, Charles Foster Jones, and the entire population of forty-two Unangax̂ (Aleut). Charles was executed, after which she was forced to watch the Japanese officer behead his corpse. The Native Americans and she were taken to Japan as prisoners of war.

Most Americans, if they think of the early months of the war in the Pacific, highlight the Bataan Death March. This 100-mile, three-part trek north up the Bataan Peninsula west of Manila embodied all the disappointment, failure, and humiliation of the war. This forced trek was marked by the Japanese capturers’ conscious cruelty in withholding food, water, and medicine; in looting and murder; and in inflicting capricious abuse and torture upon defenseless prisoners. Thousands died.

Forgotten are the four months of combat prowess, dedication, and pure heroism by the American and Filipino troops on Bataan. An estimated 12,000 American troops, 76,000 Filipino troops, and 20,000 Filipino civilians endured siege conditions marked by hunger, disease, and confusion with dwindling and antiquated war materiel. Their commanding general, Edward B. King, understood his seriously degraded force could not continue and surrendered the peninsula on April 9, 1942.