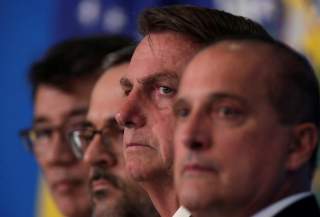 Brazil’s President Jair Bolsonaro, the so-called “Trump of the Tropics,” aspires to the same disruptive conservative change that President Donald Trump has pioneered. Bolsonaro is the first president of Brazil in history to take on big government and attempt to roll back the massive Brazilian state that is strangling its economy with taxes, mandates, regulations, and barriers to doing business—policies that have scuttled the country’s ranking in the annual Heritage Foundation Index of Economic Freedom for more than a decade.

The other two branches of Brazilian government—the Congress and the Supreme Court—are still dominated by Brazil’s version of the “deep state,” an elite and corrupt establishment nurtured by the socialist/communist alliance that used to rule the country. They have been systematically trying to box in Bolsonaro and prevent him from doing what the people elected him to do. This month the Supreme Court released former leftist president Luiz Inácio “Lula” da Silva from prison, less than twenty months into a twelve-year sentence for corruption.

The big fiscal reforms that Brazil needs, most critically on pensions and the tax code, require constitutional amendments. Thus, Bolsonaro must work with the slow-moving Congress. After Bolsonaro’s first one hundred days in office, though, the strain of dealing with the old guard in Congress was already evident. They have prevented him from changing things as quickly as he and the voters wanted.

But many bread-and-butter issues on Bolsonaro’s list of deregulatory reforms might be dealt with—at least initially—by executive orders, called Provisional Measures in Brazil, in much the same way that former President Barack Obama and Trump have used them here at home.

Bolsonaro can target many egregious laws and regulations in Brazil with his pen. For example, small businesses currently must fund and maintain internal “committees” to “prevent accidents in the workplace,” even in businesses such as accounting, insurance, or calligraphy where the risk of on-the-job injury is miniscule. Rules such as these are overseen by bureaucrats who can’t be fired, and they bleed the country’s productive and entrepreneurial middle class.

Brazil also has a long history of protectionist trade practices, which benefit Brazilian monopolies and virtual monopolies that produce many inferior quality products that consumers don’t want to buy. It’s no wonder that Brazilians are world-famous for emptying the shelves of foreign shopping malls—it’s the only way they can find what they want at reasonable prices.

Anti-competitive regulations and protectionist laws shackle Brazil’s economy, benefitting not Brazilian workers but mega-wealthy barons who own the monopolies and quasi-monopolies that are being protected.

In fact, the largest of the country’s media oligopolies, Globo Group, which is by far the largest TV network in Brazil, has taken direct aim at the president. Upwards of one-third of the members of the Brazilian Congress are said to hold an ownership stake in a media outlet. One of the more recent legislative protections for the media sector was a 2011 cable TV regulatory law enacted by the last socialist government, called SeAC, that contained provisions that ultimately served to give additional protection to the media oligopolies and have resulted in a lack of consumer choices on television in Brazil. Despite lost investment inflows due to protectionism, Globo has to date successfully lobbied Congress to retain it.

The list of attack points for Bolsonaro’s Provisional Measures pen is much longer than these examples, of course, and the Brazilian people want him to fight for changes across the economy that will benefit them, not the elites and their corrupt allies who rig the system in their favor. The enemies of change in Brazil are determined to stop every attempt to free Brazil from the regulatory nightmare that has empowered them and has ruined the country’s enormous potential time after time.

Trump’s dogged regulatory rollbacks, many done by executive order, have energized the U.S. economy and helped achieve near full employment. Bolsonaro could emulate him with his own powerful presidential pen, over and over again, until the Brazilian Congress finally gets the message.

James M. Roberts is a research fellow in The Heritage Foundation’s Center for International Trade and Economics.