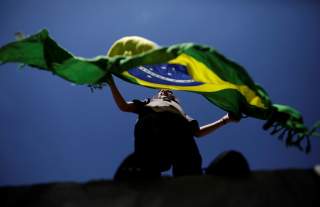 Brazil goes to the polls on October 7 to select a new president, congress, governors and local governments. It is the vote for the top national position, however, that dominates as there is no overwhelmingly frontrunner, which makes it likely that the country will face a highly polarized second round. According to opinion polls, the outcome could well pit far-right nationalist-populist Jair Bolsonaro of the small Social Liberal Party (PSL) against leftist Fernando Haddad of the Workers Party (PT). Although opinion polls indicate that Haddad would win the second round, Bolsonaro should not be ruled out as he could be the receipt of an angry voting public. And, his victory would take Brazil into uncertain terrain as it is not clear what his economic policies are and where he wants to take South America’s largest country.

Brazil’s 2018 elections have arrived to a backdrop of an economy seeking to recover from the country’s worst downturn since the 1930s. Although Brazil is slowly turning the corner with real GDP growth of 1.6 percent expected for the year, inflation is still high (it was 4.2 percent in August); unemployment remains above 12.0 percent; and the budget deficit to GDP is at 7.0 percent.

What is particularly painful for many Brazilians is that in the first decade of the twenty-first century the country made considerable progress in terms of poverty reduction and the expansion of the middle class. Much of this was under the presidency of PT leader Luiz Inacio Lula da Silva (2003–11). However, the country’s economy incurred considerable problems with the end of the commodity boom in 2014, which occurred during the presidency of Lula’s PT successor Dilma Rousseff (2011–16). Since the advent of the recession, it is estimated that GDP per person was cut by 10 percent and millions were pushed back into poverty. Additionally, many Brazilians fear for their personal safety, a condition reflected by a record number of murders last year (close to sixty-four thousand).

Brazilians have also been pummeled by a succession of political scandals and a disruptive judicial investigation (Lava Jato or Operation Car Wash) that has arrested and incarcerated major political figures and their big business counterparts. President Dilma Rousseff herself was impeached for breaking budgetary laws. Other corruption investigations hit other major political figures, both related to the ruling government parties and those in the opposition. Even the outgoing president, Michel Temer, narrowly escaped being from hauled out on corruption charges.

The combination of a bruising recession and ongoing revelations of government corruption has left voters in an ugly mood and dissatisfied with the political establishment. This has helped the candidacy of the outspoken and often politically incorrect Bolsonaro, who has positioned himself as an outsider, man of action, bold and ready to right the country’s wrongs. He stands at the head of the pack, with opinion polls giving him around 25–27 percent.

The candidate most likely to contest a second round with Bolsonaro is Haddad, who became the PT candidate after it was finally ruled that Lula was not allowed to run. The former mayor of Sao Paulo had a late start, but he has managed to campaign hard on social issues, reaching to the PT faithful, while demonstrating that he will be pragmatic economically, with an eye to the middle class. Haddad has been polling at a little over 20 percent of the vote.

While Bolsonaro and Haddad lead, the other candidates that might gain enough votes to take them into a second round are Ciro Gomes (10–12 percent) and Geraldo Alckmin (at 8 percent). Gomes is a center-left former governor of Ceara (northeastern state) and the candidate of the Democratic Labor Party (PDT). Alckmin is a former governor, the candidate of Brazilian Social Democracy Party (PSDB), and the most pro-business of the frontrunners. Both men lack charisma and are perceived by many Brazilians as part of the disgraced political establishment.

The expectation is that Bolsonaro will probably win the first round of the elections, but lose in a second round which would be held on October 28. Opinion polls indicate that Haddad would defeat Bolsonaro by 42 percent versus 38 percent in a second-round contest. Polls are also showing that Bolsonaro would also lose a runoff second-round election if he had to face either Gomes or Alckim.

But Bolsonaro should not be so easily dismissed. He is one of the more colorful presidential candidates to grace Brazil’s often frothy politics, making the cover of The Economist described as “Latin America’s latest menace.” Indeed, Bolsonaro has a less polished side and many Brazilians are scandalized by him. A former military man, he has been accused of embellishing his time in the army and has at various times suggested that perhaps the armed forces should return to power. He condoned torture during the military regime (1965–85) and has openly disparaged gays, women and blacks.

Alternately, for a sizable slice of Brazilians, Bolsonaro is a breath of fresh air, promising to crack down hard on crime as well as promising to get the economy going again. Although he indicated that he was not strong on economics, he brought a well-known free-market economist (and graduate of the University of Chicago) Paulo Guedes as his chief economic adviser.

In early September Bolsonaro’s campaign was almost derailed by an assassination attempt. The assailant told police that he stabbed the far-right candidate because he had “orders from God.” Although he had to undergo surgery, Bolsonaro quickly bounced back, adroitly making use of his hospital room as his campaign headquarters and gaining considerable media coverage with that action.

From his Sao Paulo hospital room, Bolsonaro has actively reached out to his supporters via an endless stream of tweets. He has 1.5 million Twitter followers and his messages are very much in the Trumpian vein as reflected by the following, “We want to rescue our long-lost values and get Brazil out of this swamp of violence and corruption they have put us in! Our country cannot take another four years of this.”

Opinion polls suggest Bolsonaro will suffer the fate of far-right National Front candidates in France, such as Marine Le Pen; strong enough to poll strongly in a crowded field and make it to a second round, but doomed to fail the final vote when most other parties throw their support to anyone but the far-right candidate. While that is a possibility, Bolsonaro might actually win as many Brazilians see the other candidates as more of the same coming out of a corrupt political establishment. Although it can be said that Bolsonaro is part of that establishment, he has managed to distance himself from the corrupt state. With an angry electorate this has an appeal, perhaps enough to win him the presidency.

Bolsonaro’s populism is not something imported from the United States, though there are similarities. It harkens back to a populist political tradition best exemplified by Getulio Vargas, who dominated the country’s politics from 1930–45. Vargas, whose nickname was “the father of the poor,” favored nationalism, industrialization, centralization, social welfare and populism. And he had an autocratic streak, ruling as a dictator from 1937 to 1945. He was re-elected as president in 1951 and during his last presidency was a firm economic nationalist, founding the state-owned oil company, Petrobras, which ironically was the one of the main points of investigation into official corruption under Operation Car Wash in the 2010s. He ultimately shot himself, when threatened by a coup in 1954. There is more than a faint echo of Vargas in Bolsonaro.

Bolsonaro’s presidential campaign has overshadowed the other elections taking place in October, especially for Congress. Although the corruption probes have hurt the national legislative body, turnover is not expected to be high due to strong patronage networks built deeply into local politics. The high cost of campaigns is another factor likely to keep too much turnover. For any president to get legislation through the Senate and Chamber of Deputies he or she will have to negotiate through a welter of political parties and somehow forge a coalition capable passing bills. Many analysts question Bolsonaro’s ability to do this, which also means that any radical changes in economic direction could be hard to implement.

Whoever wins the Brazilian presidency has major problems to deal with. Beyond the need to ramp up economic growth and generate jobs, the fiscal situation is in dire need of an overhaul. Spending of pensions for retired public workers and formal sector workers accounts for 56 percent of federal spending and is rising at a rate of four percentage points above inflation. There is also a slow, but steady rise in public sector debt. At the same time, the corruption probes are continuing, potentially further unsettling the political and big business circles, which could complicate the economic recovery and the ability of the new president to get legislation through the Congress.

Brazil is at a crossroads; the 2018 election is definitional. Considering how traditional center-right, centrist and center-left parties in other democracies have wilted in recent years as well as the high level of public discontent with Brazil’s political class, a populist outsider has a chance to win, possibly even more than potential voters are willing to let on to opinion poll markers. If nothing else, such a development would extend uncertainty over a pivotal Emerging Market economy at a time of heightened market sensitivity.