Brazil's Bolsonaro Is No Friend of Liberty 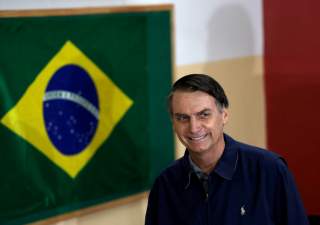 “The enemy of my enemy is my friend,” goes the ancient proverb. In the case of Brazil, the prospect of the left-wing Workers’ Party (PT) returning to power has encouraged the markets and some liberty advocates to enthusiastically support the candidacy of Jair Bolsonaro, a far Right former army captain who is likely to win the runoff election this Sunday. That is a big mistake.

There would be good reasons to worry about a PT victory. It was under the party’s rule that a complex web of corruption involving Petrobras and other state-owned companies metastasized. The Federal Police estimates that up to $12 billion of public funds were misappropriated, with some observers calling it “the largest corruption scandal in history.” The purpose of the scheme was to consolidate the PT as the country’s hegemonic political force for years to come. The scandal implicated most of the political establishment—including leading politicians from other big parties—but the PT adopted the most cynical attitude to the exposure and prosecution of malfeasance, claiming it constituted a “right-wing coup” from “neoliberal elites.”

This defiance was epitomized by the aborted candidacy of former president Luiz Inácio “Lula” da Silva, who is serving a twelve-year sentence for corruption and money laundering. He was disqualified from the presidential race by a law that he signed in 2010, which prevents someone with a criminal conviction that has been upheld on appeal from running for office. Still, he claimed that his popularity—he was comfortably leading the polls—was reason enough to let him run and that his detention was little different from his previous jailing during the military dictatorship.

Lula was replaced at the top of ticket by Fernando Haddad, a former mayor of São Paulo. Even though he is a moderate, the PT has become more radical and is on a quest for vengeance against the so-called “neoliberal elites.” Proof that the PT moved to the far left is that its campaign platform calls for a constituent assembly and political control of federal prosecutors and judges. During the campaign, instead of highlighting his moderate credentials and competent record running Brazil’s largest metropolis, Haddad stressed that he was Lula’s man.

The other reason to fear the return of the PT is its utter mismanagement of the economy, particularly during the government of Dilma Rousseff (2011–2016). Brazil enjoyed an economic bonanza in the Lula years (2003–2010) that lifted millions from poverty and swelled the ranks of the middle class. Many poor Brazilians still credit the PT for this. However, most of that growth was fueled by high commodity prices. Once these fell, the Rousseff administration tried to stimulate the economy through artificially low interest rates and public spending. The result was disastrous: both inflation and the fiscal deficit exploded, private investment collapsed, and unemployment soared. Brazil experienced its worst economic crisis in history. Rousseff was eventually impeached for her government’s illegal handling of budgetary accounts.

The economy is not out of the woods: unemployment remains high, growth is meager and public-sector debt is dangerously high at 84 percent of GDP. Brazil desperately needs structural reforms, particularly of its lavish pension system. Otherwise, it risks another crisis that would impoverish millions. Unfortunately, the PT is doubling down on its left-wing economic policies, promising more spending and monetary stimulus. It also denies any need for pension reform to address Brazil’s long term fiscal imbalances.

With such a dismal record, it is no wonder that many Brazilians despise the PT. Since all the other big parties are also tarnished by corruption allegations, they are supporting an eccentric former congressman with a military past that promises to be tough on crime, Brazil’s other blight—last year an average 175 people were killed every day. Enter Jair Bolsonaro, who nearly won the presidency in the first round with 46 percent of the vote.

Bolsonaro has a long history of making misogynist, homophobic and racist statements. He claims that the solution to the crime epidemic is allowing the police to execute more criminals—in 2016 police officers killed an astonishing 4,224 people. He is also an admirer of the military dictatorship that ruled between 1964–1985, criticizing it only for not killing enough “Commies.” He dedicated his vote to impeach Rousseff to a former army colonel that ran the torture dungeons during military rule—Rousseff herself was tortured back then. Bolsonaro is a classic authoritarian along the lines of Rodrigo Duterte in the Philippines.

Bolsonaro admits not knowing much about the economy, but his chief economic adviser is Paulo Guedes, a Chicago-trained economist with impeccable free market credentials. He advocates significant spending cuts, an ambitious pension reform, and massive privatizations. Thus, the markets’ enthusiasm with Bolsonaro.

However, his relationship with Guedes is not solid. In recent weeks Bolsonaro has distanced himself from the idea of privatizing state assets and has called for an expansion of welfare programs. His party’s congressional delegation has many former members of the military, which is an institution that has long championed “developmentalism,” a theory that embraces economic nationalism and state interventionism. As a congressman, Bolsonaro voted against the Plano Real that ended hyperinflation and brought macroeconomic stability to Brazil, opposed privatizations and pension reform, and supported protectionism. It is plausible that under a Bolsonaro administration there will be some reforms, but his overall policies will be far from resembling a pro-liberty agenda.

Both Haddad and Bolsonaro are bad choices for Brazil, but the latter’s views on dictatorship and minorities are particularly troublesome. Populism and authoritarianism have a terrible record in Latin America. There is no reason to think that Brazil would be the exception under Jair Bolsonaro.

Juan Carlos Hidalgo is a policy analyst on Latin America at the Cato Institute’s Center for Global Liberty and Prosperity.