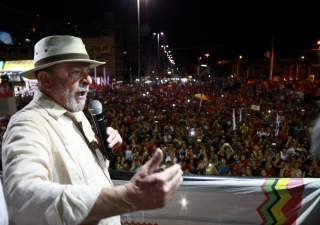 Those two socialists have been out of power since 2016, yet the country’s economy continues to flail. Its score in The Heritage Foundation’s annual Index of Economic Freedom fell again this year, reflecting a significant deterioration of Brazil’s fiscal health—aggravated by decreases in labor freedom, business freedom, government spending, and government integrity.

At the same time, Brazilian politics and social institutions have become increasingly unstable.

Despite all this, Reuters reports that a recent poll indicates Lula could easily win another term as president in this October’s presidential election.

Brazilians would be well-advised to think twice before voting to return to what might be called “Lula-ismo.” To understand why, all they need is look at their big neighbor to the south.

When it comes to self-imposed economic damage from budget-busting leftist populism, Argentina’s track record is even longer and bleaker than Brazil’s.

Argentinian Col. Juan Domingo Perón seized power in a 1943 military coup and secured ratification of his military dictatorship by a slim margin in a 1946 presidential election. He then quickly embarked on building a sprawling welfare state to purchase future voter loyalty. For most of the subsequent seven-plus decades, the brutally effective political machine he constructed has de facto ruled Argentina.

The record of Perónism is one of nationalized industries, inefficient and corrupt state-owned enterprises, Marxist-inspired import-substitution industrialization policies, and government monopoly control of exports and the hard currency revenues they brought into the country. Along the way Perón jailed political opponents and censored media critics.

Fortunately for Brazil, the political situation has not deteriorated to the same extent. Brazilians shifted back to market-based democracy when they learned the hard way (through the 2016 economic and budgetary crashes that led to Rousseff’s impeachment) that the government could not maintain profligate spending habits based on cronyism forever.

Many fear, however, that if Lula succeeds in regaining the presidency, then he would put Brazil back onto the path towards the Brazilian version of populist Kirchnerismo (which translates to “Lula-ismo” in Portuguese) that it had been on before Rousseff’s removal from office.

So far, Lula’s planned political comeback has hit one roadblock after another. Last year he was convicted on corruption charges. Earlier this year, an appeals court uphold that conviction, which means that Lula cannot legally take office as president even if he wins the election.

In the meantime, free-market think tanks in Brazil, such as the Instituto Monte Castelo in Brasilia, are working overtime to convince Brazilians of the benefits of more economic freedom for their country. The 2018 general elections will provide those voters with an excellent opportunity to send that message to the country’s political establishment.

James M. Roberts is Research Fellow for Economic Freedom and Growth in the Center for International Trade and Economics, of the Shelby and Cullum Davis Institute for National Security and Foreign Policy at The Heritage Foundation.