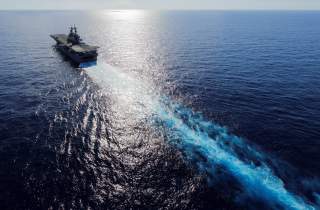 So Adm. Phil Davidson, the commander of U.S. Fleet Forces Command, has come out in favor of longer, more rigorous training before aspiring surface warfare officers step aboard their first ships. Good, and not a moment too soon. But let’s ask why it took a series of shipboard disasters to jolt the U.S. Navy into reforming the training regimen. Also worth probing is whether problems with seamanship, navigation and combat proficiency can be truly fixed without seismic change.

Adjusting the training pipeline that readies officers for sea duty may not be enough. Girding for today’s high-seas challenges warrants drastic change to shipboard operating practices—indeed, to how the surface navy structures ship crews, assigns personnel, and sets priorities.

Dispensing with orthodoxy would make a good start. Such efforts are already underway at the strategic level. Earlier this month Undersecretary of the Navy Thomas Modly convened a group of naval experts in Newport for a “Breaking the Mold” Workshop. The mold the organizers meant to shatter was conventional thinking about such matters as how to defend Western Europe against Russia, deter Chinese aggression, and organize the federal government to make and prosecute strategy effectively and harmoniously.

I took part in a working group contemplating whether to convert Asia’s “first island chain” into a barrier to Chinese maritime movement, as Toshi Yoshihara and I proposed back in 2012. I’ve harped on the concept from time to time since. Gratifyingly, the group consensus seemed to be: yes. We will make China weep bitter tears!

In the spirit of breaking molds, let’s examine Admiral Davidson’s plea on behalf of new rigor in surface warfare training. It raises a question cosmic in scope—namely, why did it take a string of accidents claiming the lives of seventeen U.S. Seventh Fleet sailors to persuade the surface community to take problems with seamanship and navigation seriously? Maneuvering ships in proximity to other ships is basic blocking and tackling for any sea service. You’d think any hint of trouble would elicit a swift and sure response from service potentates—and yet the response has been sluggish.

Nor is this just a U.S. Navy phenomenon. How to diagnose and correct organizational maladies before disaster strikes constitutes an urgent question for anyone entrusted with leadership. Doing so seems to defy human nature. “If it ain’t broke, don’t fix it,” seems to be hardwired into our reflexes. Except the reflex goes beyond that, doesn’t it? It’s more like, “If it hasn’t been proved beyond the shadow of a doubt to be broke, don’t fix it.” Which is why, all too often, it takes a cataclysm to break the mold. A systemic collapse supplies irrefutable proof that existing “modes and orders”—as Florentine philosopher-statesman Niccolò Machiavelli put it—have failed and must be mended or replaced.

Change comes once events discredit old methods beyond dispute. Custodians of the status quo can no longer deny failure. But if change has to await disaster, it tends to come belatedly if not too late. We lag behind the times.

Bureaucratic institutions as a whole display the same vice—except worse. Bureaucracies are like machines. Machinery doesn’t easily adjust as times change; it has to be reengineered. Its operators oppose retooling. Bureaucratic leaders are charged with performing the same repertoire of tasks the same way, over and over again. They also wield coercive power that lets them enforce standard procedures and techniques with machinelike efficiency.

If it’s hard to shake up an individual’s habits of thought and deed, try shaking up an institution whose overseers command the authority to reward the subordinate who remains faithful to conventional ways while punishing the apostate who rejects them.

The nature of big institutions is why it’s possible to make a foreseeably faulty decision such as disbanding training for junior officers— as the surface navy did in 2003—and stand by that decision for years. Most of the changes Admiral Davidson espouses involve undoing bad decisions from around the turn of the century, and rediscovering the fundamentals. Timeless truths such as this: Extended schoolhouse training is imperative for newcomers to the naval profession, a highly technical line of work. You cannot self-educate yourself on complex engineering and weapon systems from a stack of CD-ROMs. Aspiring shiphandlers need practice handling small craft before reporting to their first ships, where the consequences of inexperience could be severe.

But until catastrophe struck, repeatedly, during the annus horribilis that was 2017, it was possible to live with the cognitive dissonance between bad policy and so-so performance in fleet operations. Incontrovertible results hadn’t yet come in to prove the system was broken and must be fixed.

Machiavelli was familiar with this corporate lethargy, which is why he beseeches sovereigns and commanders to keep up with changing times. This is their foremost and hardest task. Overcoming inertia just isn’t easy. It takes vision to see that current practices have fallen behind the times and surroundings; the gumption to demand that the institution embrace the new vision; and the stick-to-it-iveness to enforce that vision for a long time—etching it on the organization’s practices and ways of thinking. It remains to be seen whether the surface navy can remake its culture in the Machiavellian sense.

But even if so, is fixing the training pipeline enough? Color me skeptical. It’s been an open secret in the surface fleet for many years that junior officers never sleep. They never sleep because they have too much work to do between administrative duties, watchstanding, and trying to learn enough to qualify for that next post—whether it’s as the engineering officer of the watch, supervising the propulsion plant and auxiliary machinery, or as the officer of the deck, the captain’s surrogate when the skipper is absent from the bridge. These are big, complex jobs laden with responsibility. Proficiency at them comes neither easy nor quick.

To their credit, navy leaders now acknowledge the baneful effects of fatigue and overwork. The service is bulking up crew complements, reversing another misbegotten initiative from the turn of the century: “optimal,” or more accurately, “minimum” manning. That refers to the practice of cutting crew sizes to a bare minimum and trusting to shore facilities to take up the slack in such critical areas as equipment maintenance. (A shocker from last year’s investigations: that arrangement doesn’t work. It leaves ship crews ill-prepared to repair hardware that has broken down, while shore repair shops have largely been shut down to save money.)

Adding new manpower will reduce the number of one-hundred-hour weeks crews report putting in, on the logic that more hands make lighter work. But let’s not kid ourselves. We youngsters were overloaded even back in the good old days of the Cold War, before minimum manning and other such whimsy. I’d estimate I slept four hours per night on sea duty, and I never once hit the sack knowing I had finished my work. I hadn’t. Nor was my experience atypical.

Supplementing crew numbers will help, then, but it won’t solve the problem of overworked and undertrained officers.

Beyond augmenting crew numbers, the main remedy bruited about thus far is to impose mandatory rest hours, much as naval-aviation chieftains mandate that aircrews get a decent night’s sleep when on flying duty. But the surface-navy leadership can order officers to sleep all it pleases. They will—and their work will pile up. Unless the community cuts back on junior officers’ workload, it will have a fleet full of well-rested officers with backlogs of work that swell by the day.

So in the interest of smashing molds, a humble suggestion: why not liberate junior officers from administrative duty altogether? The Navy aspires to groom a corps of superb shiphandlers, navigators and tacticians. Fine: let’s make that the principle around which we cast a new mold. Everything else should come second to seamanship and combat skill. Once freed from such everyday chores as inspecting sailors’ uniforms and haircuts, reviewing training schedules, and verifying that preventive maintenance has been done, junior officers can spend virtually all of their time learning how to operate and fight their ship.

Think about the benefits of radical change. Officers recently commissioned into the surface fleet spend about three and a half years as division officers. (A division is the basic organizational building block for a ship’s organization. Each one specializes in some function, and is grouped with other divisions into a department.) Newly commissioned officers are installed as the heads of divisions—and typically find themselves as neophytes among experts. Learning to supervise a division and keep its affairs in order is a full-time job. Immediate administrative demands are also what obsesses higher-ups, who want to look good for the next inspection. Administration has a habit of crowding out training.

Training in seamanship and tactics is a full-time job as well—and thus, at times, an orphan. To qualify as surface-warfare officers, aspirants must complete book-length “personnel qualification standards” in such disparate fields as propulsion engineering, firefighting and damage control, and combat systems. Learning to head up an engineering watch team, a fire party, and the bridge watch team could easily consume that initial three and a half years, especially if the Navy wants new mariners to get enough reps—enough watches, routine shipboard functions such as flight operations or refueling at sea, and emergency drills—for seafaring to become second nature to them. Practice is crucial.