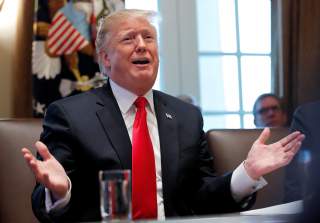 The unraveling of U.S. Syria policy has been rapid and surprising after more than a half-decade of varying degrees of U.S. engagement in the conflict. “I made it clear from the beginning that our mission in Syria was to strip ISIS of its military strongholds; we’re not nation building. Rebuilding Syria will require a political solution,” President Donald Trump told soldiers at Al-Asad airbase in Iraq on December 26. The White House now seeks to slow the withdrawal of U.S. forces from Syria, but it is still committed to leaving. The bifurcation of military goals from political goals in Syria is the central reason that Washington’s role in Syria has unraveled. It is worth examining how that happened both to understand it and learn from it.

U.S. policymakers, strategists and soldiers have a long tradition of studying Carl von Clausewitz, the nineteenth-century Prussian general. Paraphrasing Clausewitz, Colin Powell in the 1990s argued that “military planning must flow from clear political direction.” H.R. McMaster, Trump’s second National Security Advisor, believed in the Clausewitz dogma. “Leaders should also abandon the belief that wars can be waged efficiently with a minimalist approach to the commitment of forces and other resources,” he wrote in 2008. Secretary of Defense James Mattis was also familiar with Clausewitz, referencing him in an interview several times.

However, in Syria, the United States pursued varied and often contradictory policies that run in direct contrast to the idea that military plans flow from a political goal. Speaking to the House Armed Services Committee in September, Assistant Secretary of Defense Robert Karem laid out American objectives in Syria. “The United States seeks to secure the enduring defeat of ISIS and al-Qa’ida and its affiliates.” Goal number one. “Deter the use of chemical weapons.” Goal number two. “Counter Iran’s malign, destabilizing influence.” Goal number three. “The United States also seeks a peaceful resolution of the multifaceted conflict in Syria in a manner that protects U.S. interests, preserves a favorable regional balance of power, protects our allies and partners, and alleviates human suffering.” Goals five, six, seven and more.

The way the objectives were listed was not chronological in terms of how the United States initially viewed the Syrian conflict. Under the Obama administration, the United States supported the Syrian opposition. This included degrees of training and clandestine support since 2012. The attempt to support the Syrian rebels was criticized as ineffective by 2015, with evidence showing that despite the efforts few U.S.-vetted rebel groups had been successfully fielded. This program was estimated to cost up to $500 million by 2016 and one billion when it was wrapped up by Trump in 2017.

Washington also changed its perception of the Assad regime over the years. In 2017 Secretary of State Rex Tillerson indicated before a round of Geneva peace talks that Bashar al-Assad would have no role in the future of Syria. By January 2018, Tillerson indicated that U.S. forces in Syria would remain not only as leverage against Assad but also to prevent Iran from “strengthening its own position in Syria.”

While the United States opposed Assad and had aided the opposition, it also pursued a political track in Geneva from which the United States became increasingly isolated. U.S. envoy James Jeffrey said in September at the State Department that “we are pushing freezing the conflict in every way possible and then seizing a diplomatic opportunity to push for the implementation of the UN Security Council resolution [2254] that covers ending conflict in Syria.” Since 2015, however, the United States has been pushed out of the political process as Russia hosted talks in Astana with Russia, Turkey and Iran. The day before Trump announced he was withdrawing from Syria on December 19, the Russians met with Turkey and Iran in Geneva to discuss a Syrian constitution committee.

With Washington isolated from the political process and having wrapped up the support for the Syrian opposition, two goals remained by the fall of last year. First was the anti-ISIS goal.

Jeffrey said in September that this was the first U.S. goal. “The U.S. will remain in Syria until the enduring defeat of ISIS.” He called it a “military mission.” This was the mission that began in August 2014 when President Barack Obama ordered airstrikes to stop ISIS from committing atrocities against the Yazidis in Iraq. It eventually grew to include a seventy-three-nation global coalition. Anti-ISIS envoy Brett McGurk resigned when Trump chose to leave Syria. The Syria campaign of the anti-ISIS Coalition counted on the United States for most of its heavy-lifting as many coalition partners did not operate in Syria. The United States built bases and eventually raised troop levels to around two thousand soldiers.

U.S. policy in Syria was to use a small footprint and work “by, with and through” the Syrian Democratic Forces (SDF), the mostly Kurdish-led force that was fighting ISIS successfully. The SDF had liberated Raqqa in the fall of 2017, and in the summer and fall of 2018, the United States launched Operation Roundup, part of the Jazeera Storm, the SDF name of the same operation to clear ISIS from the Euphrates valley. The U.S. military was talking about “stabilization” after ISIS. This term was absent from some State Department briefings on the same conflict or viewed as a military-specific term. Jeffrey said it was a “stage-four aspect to the military, political, diplomatic, economic effort to try to ensure that something like ISIS doesn’t return.” It would involve “civilians working on assistance, political officers in northeastern Syria trying to help on that longer-term process,” Jeffrey said in November 2018.

An objective of reducing Iranian influence in Syria was added to the list of goals in the fall of 2018. In September, National Security Advisor John Bolton said the United States would stay in Syria until Iran left. This would include Iranian-commanded forces as well, Washington indicated. However, the Pentagon felt this potentially lacked U.S. authorization. A Department of Defense Lead Inspector General report from September argued that the U.S. presence in Syria derived from a 2001 Authorization for Use of Military Force and could be seen to come under combatting those who were involved in 9/11 since ISIS was connected to Al Qaeda. There was no special authorization for staying in Syria to deal with Iran. Yet the United States was already looking at its presence in Syria as a way to counter Iran. The National Defense Authorization Act signed in August 2018 included a call by Congress for the White House to layout an Iran strategy.

The U.S. role has now been altered again to a slow and coordinated withdrawal from Syria. U.S. Senator Lindsey Graham met with Trump on December 30 and said the new goals involved the permanent destruction of ISIS, making sure “Iran doesn’t fill in the back end” and that “our Kurdish allies are protected.” Trump indicated at Al-Asad that the United States is still interested in a political goal regarding Syria.

Regardless of how long it now takes the United States to leave, whether it is the original 100 days estimated in December or up to four months or more as has been estimated, U.S. strategy has unraveled. This is a perfect example of a strategy that was not well coordinated between the Pentagon, State Department and White House and goes against the Clausewitzian notions that are frequently cited as underpinning U.S. goal-setting in foreign policy and conflict.

How did this happen? Partly it is due to a change in administration. Obama got involved in Syria as part of the Arab Spring revolutions. Hosni Mubarak had been pushed out in Egypt in a largely peaceful transition of power. After the United States had participated in the Libyan campaign against Muammar el-Qaddafi, who was killed in October 2011, there was hope that a revolution might topple Syria’s Assad as well. But Syria didn’t turn out that way and the Obama administration hesitated with air strikes after chemical weapons were used in 2013. Then the administration got involved in the Iran deal, which altered priorities in Syria, according to former ambassador Robert S. Ford.

Shifting gears to an anti-ISIS campaign turned the Syria conflict into a multi-headed affair. While the United States pursued diplomacy in Geneva, it still was supporting the Syrian rebels and fighting ISIS alongside the mostly Kurdish SDF—which was formed in 2015. Already in 2016 these divergent policies almost ended up fighting themselves when U.S.-backed rebels joined the Turkish offensive into Jarabulus and almost clashed with the U.S.-backed SDF. From there, pressure from Turkey built on the United States to stop its support for the SDF, which Ankara saw as linked to the People’s Protection Units (YPG) and therefore to the Kurdistan Workers Party (PKK).

Trump said the United States was leaving “very soon” in March 2018 before being convinced to stay longer. He says the military kept asking for six more months. When Turkish president Recep Tayyip Erdogan spoke to Trump on December 14, the president decided it was time to withdraw.