Breaking Up with Britain: Why Mauritius Wants an Agreement with America 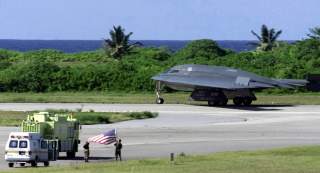 The United States and Mauritius share a clear national interest—preserving the U.S. naval base on Diego Garcia, the largest island of the Chagos Archipelago in the Indian Ocean. The base is vital not only for U.S. security interests but for the stability and security of the entire Indo-Pacific region.

Since 1966, the United States has leased the island from the United Kingdom. But British control over the Chagos Archipelago, including Diego Garcia, has been declared illegal by the International Court of Justice (ICJ). Both the ICJ and the UN General Assembly (UNGA) demanded that Britain end its control over the Archipelago as rapidly as possible, and not later than November 22 of this year. That deadline has passed without the British ending their illegal control over the islands.

The Chagos Archipelago was part of Mauritius when the British illegally separated the islands before its independence and created a new colony known as the “British Indian Ocean Territory” (“BIOT”). During this process, the British forcibly evicted the Chagos Archipelago inhabitants from their homes, moving them to Mauritius and Seychelles without providing them with any means of support.

At the behest of Mauritius, the UN brought this travesty to the ICJ, the world’s most authoritative judicial body, in 2017. In its February 25 ruling, the ICJ concluded that Britain had acted unlawfully in separating the Chagos Archipelago from Mauritius and that its ongoing colonial administration was illegal. As a consequence, the Court ruled that the UK must “bring to an end its administration of the Chagos Archipelago as rapidly as possible.” The UN General Assembly reaffirmed the Court’s conclusions and demanded the UK’s compliance with them by a vote of 116 to 6.

These developments could clearly affect the future of the Diego Garcia base. However, since the Republic of Mauritius shares many of America’s concerns about threats to security in the Indian Ocean region, it is fully committed to the continuation of the base as a strategic U.S. facility. In fact, Mauritius is also willing to enter into a long-term lease agreement with the United States, which would go beyond the duration of the current UK-U.S. lease (which expires in 2036). Mauritius has made this pledge publicly before the ICJ and the UNGA and, most importantly, directly to the U.S. government.

Such an arrangement provides long-term stability to the United States instead of reliance on the United Kingdom as its “landlord”—a situation that is now legally unsustainable and becoming increasingly untenable politically. The ICJ’s ruling constitutes a serious blow to British legitimacy and credibility around the world, including among its (soon-to-be-former) partners in the EU, many of which joined in the UNGA vote demanding the UK’s departure from the Chagos Archipelago within six months. Indeed, Britain will find itself increasingly isolated diplomatically. And with the UK in the midst of a general election, it is notable that Labour leader Jeremy Corbyn has promised, once his party returns to power, to return the Chagos Archipelago to the effective sovereign control of Mauritius, in order to bring Britain into compliance with international law.

On the other hand, Mauritian political leaders are united in support of a strong, continued U.S. presence on Diego Garcia. Indeed, Mauritius seeks to develop a deeper partnership with the United States. With a stable parliamentary democracy and a growing market economy, Mauritius is a natural and reliable regional partner for both the United States and Britain. Mauritius shares American concerns about terrorism, drug trafficking, smuggling, human trafficking, piracy and other security issues in the region. Mauritius has also long been a close partner of India and values the development of closer strategic ties between India and the United States.

This is, therefore, the perfect moment for the United States to seize the opportunity to enter into a long-term lease agreement with Mauritius. This would provide a stable and long-term arrangement for the base at Diego Garcia and thus serve the long-term interests of the United States in the region. As the United States seeks to ensure that the Indo-Pacific region is strong, stable, and secure, Mauritius is fully committed to being its reliable partner in this important endeavor.