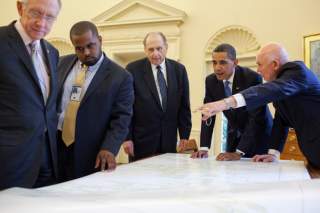 Does the United States have a grand strategy today? Does it have a coherent set of principles guiding its engagement with the world? These questions have been at the center of recent debates on American foreign policy. In the wake of the president’s widely panned speech at West Point late last month, critics have charged that the United States lacks an overarching design in global affairs; that the country has become rudderless in a stormy sea of international events.

The reality is somewhat different. The Obama administration does have a grand strategy in the sense that there are fairly clear strategic principles that structure its conduct overseas. Those principles revolve around the idea of maintaining American international leadership and primacy, but doing so at lower costs and in ways that better reflect the changing geography of global power. These concepts, moreover, are not obviously wrong or quixotic—given the combination of challenges and constraints that the country now faces, they actually make fairly good sense.

That’s the good news. The bad news is that sensible strategies are not always successful strategies, and the particular grand strategy that the Obama administration has sought to pursue also contains within it a set of key tensions, challenges and dilemmas. These issues touch on some of the fundamental challenges of the grand-strategic endeavor—and they could prove quite serious in the years ahead.

What Is Grand Strategy, Anyway?

As I explain in my recent book on the subject, a grand strategy is essentially an integrated set of principles and priorities that give structure to a country’s statecraft. It consists of a series of considered, interlocking judgments: about the nature of the global environment, a country’s highest goals and interests within that environment, the primary threats to those goals and interests, and the ways that finite resources can be deployed accordingly. These judgments make up a sort of intellectual calculus that informs policy, the various concrete initiatives—diplomacy, foreign aid, the use of force—through which states interact with the world. Put simply, a grand strategy is the basic conceptual framework that helps nations navigate a complex and dangerous international environment.

Having a grand strategy is, therefore, essential if states are to maintain focus and discipline in their statecraft, and effectively use their power. Yet getting grand strategy right is never an easy task. The very endeavor of grand strategy requires countries to prioritize among competing challenges and opportunities, and to make painful decisions about trade-offs between various goals and objectives. It forces officials to relate short-term policies to long-term interests, and to both exploit and preserve the myriad sources of national power. Moreover, they must do all of this in a constantly evolving international environment, and amid the furies of domestic and bureaucratic politics at home.

For these reasons, a grand strategy can never be a road map with all of the twists and turns plotted out in advance, or a panacea that somehow wipes away the complexity of the global arena. At best, a grand strategy is simply a collection of generally coherent ideas about where a country seeks to go in the world and how it should seek to get there. These ideas need to be firm and focused enough to keep American policy anchored amid the geopolitical squalls, but also flexible enough to allow adaptation and even improvisation in their implementation. Indeed, the ultimate test of a grand strategy is not whether it provides seamless coherence and flawless performance in a country’s foreign policy; it is whether it simply offers enough coherence and performance so that a country can advance towards its highest objectives over time.

So what is President Obama’s grand strategy today? Over the past several years, his administration has gradually assembled a grand strategy based on three overarching ideas, each of which is framed by one of the key geopolitical contexts in which American foreign policy is now operating.

The first of these is the post–Cold War context. By virtually any standard, the post–Cold War order has been extremely favorable to the United States. It’s an order that has been very stable and peaceful by any meaningful historical comparison. It’s an order in which the democratic countries—particularly the United States—have enjoyed a clear preponderance of power. It's also an order that has been very favorable to the further advancement of free markets and democracy. In sum, the post–Cold War order is a world in which the United States can live very comfortably and very advantageously. And so, not surprisingly, the first principle of the Obama administration's grand strategy has been to preserve that order by sustaining the American leadership and primacy on which it rests.

This goal is hardly original to this administration—it dates back to the 1990s—but the Obama team has embraced this objective, restating it more or less explicitly in every major strategy document released since 2009. And that goal has been evident in policies that are so longstanding and ingrained, that Americans often forget how significant they truly are: maintaining the world’s strongest military as the backbone of the international order; reaffirming alliance commitments and forward force deployments as a source of global stability; opposing nuclear proliferation and other threats that could disrupt the existing order; deepening the international economy through the pursuit of free-trade agreements; and others. As Peter Feaver and other analysts have pointed out, all of these policies reflect a commitment to preserving and extending a favorable international system. This commitment represents the first and oldest principle of America’s current grand strategy.

The second guiding principle of Obama’s grand strategy is newer, and it flows from a different context—the post-Iraq context. By the time Obama took power in 2009, it was becoming clear that the United States was in a position of significant strategic and military overstretch, that the war in Iraq weakened U.S. power rather than strengthening it, and that as the conflict in that country wound down, American military spending was inevitably going to decline as well.

This context gave rise to a second grand-strategic principle—that the United States does indeed need to sustain American global leadership, but that it also needs smarter, cheaper and more prudent ways of exerting that leadership, particularly when the use of force is involved. This means avoiding prolonged stability operations that the country can no longer afford, and finding more discreet ways of applying force when it is required. It entails encouraging allies and partners to bear a greater share of the load when military action does occur. Above all, it means erring on the side of caution rather than activism in military affairs—or as the president and his aides have so pithily put it, not doing the “stupid sh*t” that could turn into another Iraq and consume U.S. energies for a decade.

The policy applications of this idea are easy to see. They include the reliance on drone strikes as a primary and comparatively low-cost tool of counterterrorism, and the emphasis on “leading from behind” and keeping a very light footprint in the Libyan intervention of 2011. This idea is equally manifest in the administration’s deep and continuing reluctance to get involved militarily in Syria, and it was made perfectly explicit in the 2012 Defense Strategic Guidance—the main thrust of which was that large-scale counterinsurgency and stability operations were out, and that restraint would be the watchword of U.S. defense policy in the coming years. Obama’s grand strategy emphasizes American leadership, in other words, but it emphasizes limited-liability leadership as well.

It also stresses refocusing American engagement to reflect the changing global dynamics of the present era. This third aspect of American grand strategy is framed against a third geopolitical context, which is the dawning of the Asian century. The Asia-Pacific region is likely to be the cockpit of global-security competition and economic growth in the twenty-first century, and the rise of China in particular presents the greatest long-term challenge for American foreign policy.

Obama’s grand strategy thus stresses the imperative of reorienting American strategy to keep pace with these changes. The administration has sought to extract the United States from its deep military entanglements in the Middle East and Southwest Asia—the region that has consumed American energies over the past decade—and to devote greater attention and resources to issues of greater long-term importance.

This was the rationale, for instance, behind the much-touted and now much-derided Asia pivot. It has been the logic behind policies like the opening to Myanmar, plans to station Marines in Darwin, the upgrading of security ties with countries such as the Philippines, and others. Not least of all, it has been a powerful reason why this White House has shown so little desire to significantly prolong American involvement in Iraq or Afghanistan, or to get immersed in another Middle Eastern war in Syria. If the Asia-Pacific is the future, the thinking goes, the bogging oneself down in the Middle East means getting stuck in the past. This is the third essential line of U.S. grand strategy today.