Breaking Up: It’s Time to Prepare for Russia’s Disintegration 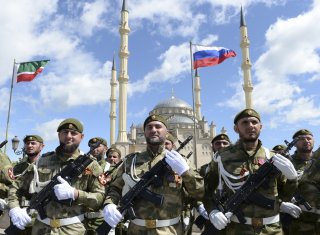 Russian president Vladimir Putin is correct that a color revolution, which will overthrow Russia’s current semi-authoritarian political framework, has begun its inevitable march toward Moscow. Putin’s emerging conservative social program may have staved it off, or his poorly-calculated gamble in Ukraine may have accelerated the mobilization against his revanchism. However, Putin’s desperate attempt to shore up Russian geography before a liberal regime permanently closes the window of opportunity is rational. What is certain is that a liberal constitution in Moscow will lead to further secession of Russian minority territories. It is time that Western strategists think clearly about their preferred geopolitical organization of Eurasia before, rather than while, Russia begins its spontaneous disintegration.

The break-up of the United Arab Republic between Egypt and Syria in 1961, the unification of Vietnam in 1975, and Germany in 1871 and 1990 all had regional strategic implications. The Soviet Union constituted 15 percent of the world’s land surface before its disintegration, which led to the creation of fifteen new nation-states and a spate of continental-scale geopolitical challenges. Irredentism in the Caucasus has become the battleground between Russian, Turkish, Iranian, and Western interests. Central Asia has overlapping spheres of Russian and Chinese influence and is threatened by militant Takfirism. Russian irredentism remains an issue in the Baltic States, Ukraine, and Moldova in Europe, and Kazakhstan in Central Asia. In comparison, Russia possesses 11 percent of the world’s terrestrial surface, including much of the northern Eurasian landmass that is favored to become productive with global climate change, and it shares a vulnerable common border with the world’s emerging Eurasian power, Communist China.

Russia is more ethnically and linguistically homogeneous than the Soviet Union, with 78 percent of its population being of Russian ethnic origin, and is therefore unlikely to unravel as calamitously as the USSR. Though Turkic peoples account for 9 percent of the population (principally the Tartars at 4 percent, and Bakshir and Chuvash at one percent each, followed by lesser-sized communities), their variations in language and religion make their combined secession unlikely. Furthermore, Turkic peoples are concentrated in the south of the Ural Mountains in the interior of European Russia, rather than on an easily detachable periphery. In contrast, the Caucasus contains geographically coherent communities of 1.5 million Chechens, almost a million each of Avars and Mordvins, and four other communities of approximately half a million. Independence plebiscites would be irresistible in a newly liberal Moscow, but the significant Azeri population in Dagestan would quickly lead to pervasive ethnic conflict, there and in every neighboring independent territory. These developments would lead to inroads by Turkey and Iran.

In the Far East, Russian demographic preponderance is sufficient to counter any independence drive. Sakha (2 percent of the world’s total land area) is evenly divided between a million Russian and Yakut people. Buryat has a similar distribution. Neither of these communities is susceptible to non-Russian ethnic incitement, given their integration. However, revolutionary transformations of government, even if they are not accompanied by uprisings, can have dramatically paralyzing effects on a state’s integrity and security. The August 1991 KGB coup against Soviet leader Mikhail Gorbachev led to the cascade and generally unforeseen collapse of the USSR. If an umbrella revolution in Moscow causes Russia to become as politically irresolute as the USSR was during the breakup of the Warsaw Pact, distant Russian territory may become indefensible. It is almost certain that Chechnya will promptly declare itself independent under these circumstances, as it did in 1991.

Russia’s Far Eastern territories are thinly populated, with only six million persons living East of Irkutsk, a 25 percent drop since 2000. China has a significant historical and resource incentive to reclaim the territories north of the Amur and Ussuri Rivers, ceded by the Manchu Empire to Russia in 1860. Russian weakness in the Far East could lead to a cascade of Chinese interventions into Mongolia, as well as in the Buryat and Sakha territories.

There is a Western precedent for intervention in Siberia. In August 1918, American, Japanese, British, Indian, Canadian, Australian, and Chinese troops landed at Vladivostok, some advancing to Irkutsk along the Trans-Siberian railway, largely to counter Japanese expansion there. A contemporary intervention would be very difficult to carry out from the sea given the proximity to Chinese air interdiction, but there are rudimentary ports whose approaches are under the cover of Japanese airbases on Hokkaido Island. Along the Primorsky Krai coast, these include Rudnaya and Svetlaya, and along the Khabarovsk Krai, there is De Kastri, Vanino, and Nikolayevks-on-Amur. If the Amur region were to fall to a Chinese incursion, Russia can maintain resistance at Yakutsk through its rail links to Irkutsk. Western forces could also secure Sakhalin Island as well, or land at Magadan in the Sea of Okhotsk.

The abrupt collapse of authoritarian regimes in Eurasia has occurred with great regularity since before the fall of the Berlin Wall in November of 1989. A cumulative demonstration effect has influenced anti-authoritarian uprisings in countless countries since the mid-1980s. The essential ingredients are generational change coupled with the widespread awareness that corrupt governance is the root cause of economic stagnation. It is Putin’s fear of the political mobilization of the eighteen to thirty-year-old cohort that has kept him from conscripting them for the war effort in Ukraine, especially as these would provide the bulk of the army that could turn against the Siloviki. Beijing, like Moscow, believes these liberal-democratic “color revolutions” are an instrument of U.S. hegemonic influence.

Had the West been aware of the impending collapse of the USSR, there may nevertheless have been an impulse to see it collapsed down to a more manageable size. The West deferred to the Soviet suppression of Baltic independence movements in 1990 (in exchange for support against Saddam Hussein), but it backed independence after the fall of the USSR. However, plebiscites could have been held in Crimea and parts of Ukraine to avert the current Russia-Ukraine conflict. Armenia certainly would have been better off remaining within a Russian confederation, given its severe security challenges, as would the governance of many of the Central Asian “Stans.”

To the extent that a territorially expansive China is the principal security threat to the rules-based international order, the West may see it advantageous to arrest the further disintegration of Russian territory. On the principle of self-determination and religious solidarity, the newly independent states of the Caucasus could be encouraged to enter into a Yugoslavian-style confederation, rather than immediately micro-fragment into ethnic conflict. It is in the interest of democratic states to ensure that the Russian Far East does not succumb to Chinese control, until at least China itself liberalizes.

Dr. Julian Spencer-Churchill is associate professor of international relations at Concordia University, and author of Militarization and War (2007) and of Strategic Nuclear Sharing (2014), and a former operations officer, 3 Field Engineer Regiment. He has published extensively on security issues and arms control, and completed research contracts at the Office of Treaty Verification at the Office of the Secretary of the Navy, and the then Ballistic Missile Defense Office (BMDO).