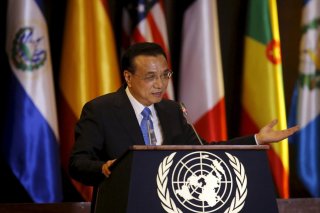 We enter 2022 with democracy facing a dangerous decline worldwide. The pandemic has accelerated a democratic backslide, as authoritarians are emerging everywhere.

Latin America is no exception.

The last two years have seen authoritarian regimes regain lost ground in Bolivia, Argentina, and elsewhere, as new autocracies are erected in El Salvador and Peru. Meanwhile, the totalitarian regimes in Cuba, Venezuela, and Nicaragua have become more entrenched than ever. This sad state of affairs comes as many Latin American nations celebrate their bicentennial of independence. Relatively young democracies, which just started to gain their democratic footing in the twentieth century, are now, in the twenty-first century, contending with an authoritarian wave that is sweeping the region.

Respected democracy scholars have noted this troubling global trend, arguing that the “bad guys are winning.” Using foreign disinformation, non-state networks, and extra-regional support, the “bad guys'' are certainly winning in Latin America. The question is what the United States can do about the rising authoritarianism in its neighborhood.

2021 was considered an election super-cycle in Latin America, during which ten countries held general or local elections. The results were mixed.

The most recent election, in December, saw Chile elect its first millennial president, Gabriel Boric, who not too long ago was a student leader in a group called the Autonomous Left, which espoused a mix of Marxism and Gramscism while connected to Chile’s communist party. A month earlier, in November, Honduras elected the country’s first woman president, Xiomara Castro, which would be a cause for celebration except that she owes her rise to political prominence to her husband, the defamed former President Manuel Zelaya, who is close to the dictators in Venezuela and Cuba.

Foggy Bottom might maintain some optimism that these two new leftist leaders will have some deference to the historic, institutional relations with the United States. Unfortunately, this is likely wishful thinking as the regional trend is reverse, where new Latin American leftist leaders maintain some deference to Washington at the onset—only to later pivot their foreign policy closer to Beijing, Moscow, and Tehran.

This is currently happening in Peru, where the new president, Pedro Castillo, made an unusual visit to China’s embassy in Lima shortly after his inauguration. This was followed by two of Castillo’s first foreign policy decisions as president: to enforce an agreement with Russia to secure classified information on the Kremlin’s technical-military cooperation in Peru, and to reverse twenty-five years of Peruvian foreign policy in the Western Sahara by reestablishing relations with the Sahrawi Arab Democratic Republic—a move that aligns Peru with Iran, Yemen, and Syria.

This is not a good sign looking ahead at the two most important elections in Latin America in 2022, in Colombia and Brazil.

On May 29, 2022, Colombians will head to the polls to elect its new president. As of now, the crowded field of 23 candidates is led by Senator Gustavo Petro, a former member of the now-defunct M-19 terrorist movement and an admirer of Venezuela’s Bolivarian revolution.  In Brazil, the twice-convicted felon, and former progressive president Luiz Inácio “Lula” da Silva is leading the polls to unseat incumbent President Jair Bolsonaro. As Brazilians approach election day on October 2, 2022, it’s worth remembering that Lula da Silva steered Brazil into the largest political corruption scandal in Latin America’s history, which ushered in the authoritarian wave it is experiencing today.

Latin America is no stranger to strongmen. The birth of democracy in the region two hundred years ago came with a wave of “caudillos” that dominated during the nineteenth century. Venezuela’s José Antonio Páez, Argentina’s Juan Manuel de Rosas, and Mexico’s Santa Anna conjure up enduring images of men on horseback ruling vast swaths of the Spanish American hinterlands. While this may still be attractive to some, this portrait of nineteenth-century leaders is vastly different from what characterizes the twenty-first-century caudillo in Latin America.

As opposed to fighting for liberation from colonial rule, the twenty-first-century neo-authoritarians in Latin America have subjected their countries’ sovereignty to external state actors: Russia, China, and Iran. Venezuela’s Nicolás Maduro and Nicaragua’s Daniel Ortega may speak about U.S. imperialism, while Bolivia’s Evo Morales will talk about 500 years of indigenous struggle. In practice, however, these Latin American neo-authoritarians have hijacked the democratic process to install twenty-first-century dictatorships, or “democraduras,” as it is colloquially called in Spanish. And they have a distinct authoritarian playbook.

The process usually begins with a populist message, but then quickly turns to radical changes to the constitution and the consolidation of power in the executive, dismantling the checks and balances necessary for a healthy democracy to function. Then typical authoritarian actions follow, such as political persecution, silencing of the press, and massive public spending. El Salvador’s Nayib Bukele is the latest elected leader in Central America to erect an autocracy, capturing the judiciary, controlling the legislature, and criticizing anyone who stands in his way.

The reality is that most Latin American countries have weak institutions and lack the rule of law, meaning that defending democracy becomes more a practice of passive acquiescence to authoritarian leaders for fear of “weakening democracy.” Meanwhile, in this century, the region's neo-authoritarian leaders have all come to power through the ballot box, only to quickly reform the democratic system by rewriting the constitution.

The subtle but important differences between representative and participatory democracy are lost among many of Latin America’s elites, resulting in a bastardization of the term to simply mean majority rule. Where the ballot box is the primary representation of democracy, ignoring the underlying freedoms and natural rights that must be protected for a democracy to function. For decades, most Latin American leaders have championed democracy but trampled on the individual liberty of their citizens while cozying up to the world’s most authoritarian regimes.

Winston Churchill famously said that “democracy is the worst form of government except for all the others that have been tried.” Latin America’s young democracies, if they are to prevail, need to begin to talk about the underpinnings of national sovereignty and individual liberty that are required for a democracy to evolve beyond election night.

Failure is Not an Option

The Biden administration consequently has its hands full in Latin America. The rising wave of authoritarianism is challenging the status quo throughout the region and pushing Latin America further away from the United States.

If the United States is going to help regional allies at this critical time, it must work out single-issue differences on important topics, such as anti-corruption or climate change, to establish broader geopolitical alliances that credibly challenge the region’s new colonial powers—Russia, China, and Iran.

Doing so requires competing, rather than chastising Latin American nations for their economic ties to China or military/energy deals with Russia. It requires America to be bolder when championing shared values, culture, and history. The United States must prioritize the region and complement its current, law enforcement-centric engagement with more multifaceted bilateral relations that help its Latin American partners push past the pandemic, understand the geopolitical realities of great power competition, and better equip themselves for a digital battle against foreign disinformation. For the United States, the cost of failing in Latin America is high.

Joseph M. Humire is the Executive Director of the Center for a Secure Free Society (SFS), a national security think tank based in Washington D.C. A longer version of this article appears in the American Foreign Policy Council’s Defense Dossier Issue 32.