The Brexit Fantasy Was Always Doomed 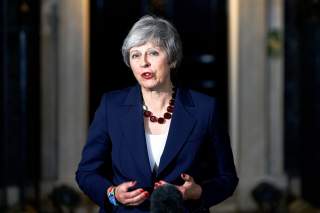 Reality is finally intruding on Brexit. Those who campaigned for the United Kingdom to leave the European Union, mostly in the governing Conservative Party, sold the British people a fantasy that was always undeliverable. Instead of leveling with the public, British prime minister Theresa May compounded the problems of Brexit by pursuing a deal on the UK’s departure from the EU with elements that are mutually exclusive in order to avoid a potentially damaging showdown within her government. Now, two-and-a-half years after the UK narrowly voted to the leave the EU, a deal has been reached on the terms of the UK’s departure and it has put the British government is on the brink of collapse and threatens the stability of the British, European, and global economies.

It doesn’t have to be this way. It is now clear that the original Brexit referendum was built on false promises and outright lies, and included hardly any mention of the one issue that has complicated Brexit the most: the Irish border. There is even a criminal investigation into the major supporter and funder of one of the primary campaign groups supporting Brexit. It is therefore entirely appropriate for the British people to reconsider their original decision now that they can see what Brexit will actually look like, rather than the inaccurate picture painted during the referendum campaign. There is still time for another referendum—a People’s Vote—on the terms of Brexit that May obtained in negotiations with the EU. That is the only viable path forward.

In June 2016, the UK voted by 52 percent to 48 percent to leave the European Union in a referendum with the second highest vote total of any election in British history. The Leave campaign featured three main promises: more money for public services that would otherwise go to the EU; regained sovereignty from EU bureaucrats over British laws and the ability to negotiate trade deals; and, reduced immigration to the UK. The deal May got from the EU would place some limits on immigration. But far from freeing up money for public services, the UK will have to pay thirty-nine billion pounds, and likely much more, just to leave the EU. And it will likely be tied to the EU’s customs regime and closely aligned to EU regulations, neither of which the UK will have any input on given that it will be outside the EU, meaning that it won’t be possible to negotiate independent trade deals.

The clock is ticking to resolve this crisis. The UK will formally leave the European Union on March 29, 2019. The UK Parliament and EU governments must approve the terms of the deal. It seems likely that the twenty-seven remaining EU member states will approve the deal. If the UK Parliament rejects the deal—which now appears to be the most likely outcome—then there will be no renegotiation of the terms, according to the EU. At that point, the UK and EU will have three options: delay the UK’s departure date and hold a general election in the UK to form a new government that could have a different outlook on Brexit; delay the UK’s departure and hold a People’s Vote; also, the UK could crash out of the EU with no deal.

A no deal Brexit would have “chaotic and severe” impact on the UK, according to an assessment produced by the UK government. Some of the consequences in the UK assessment: shortages of food and medicine; massive disruption in trade and border crossings; the value of the British pound will decline sharply; and, the UK’s credit rating will like be downgraded. This would be a catastrophic result and it should be avoided at all costs.

A new general election would be the UK’s third in the last four years, after elections in 2015 and a snap election in 2017. There is no guarantee that it would produce a government capable of passing the Brexit deal or stopping Brexit. And it is unclear if the EU would reconsider its objection to reopen the negotiations on the terms of the UK’s withdrawal from the EU. Fresh elections are not nearly as bad as no deal, but it is unlikely that they would resolve any of the outstanding issues.

Another referendum could exacerbate the deep divisions in Britain over Brexit and other issues. There are real concerns about how many in the UK would view the legitimacy a second referendum, especially if it produced a different result from the first. And choosing the questions put to the people in the referendum will be difficult. But those political problems are repairable. And in any case, they are significantly less damaging than the long term economic and social cost of the current Brexit crisis.

The terms of this deal have plunged the UK government into chaos. Several top members of May’s cabinet have resigned, including the cabinet minister responsible for negotiating with the EU on Brexit, the second person to resign from that post over objections to May’s handling of Brexit in the last five months. Many other members of Parliament in May’s Conservative Party have said they will vote against the deal in Parliament and are now pushing for a vote of no confidence in her leadership. And the Democratic Unionist Party, the small party from Northern Ireland that supports May’s minority government, has said it will oppose May’s Brexit deal and that the arrangement that keeps May’s government in power is in doubt. May is unlikely to get her Brexit deal approved by Parliament, but that seems to be a secondary consideration to whether she will even survive as prime minister.

The UK finds itself in this crisis because the dreams of the Brexiteers are irreconcilable with what is actually possible, and May chose to avoid confronting that reality until now. Extricating the EU’s second largest economy from its common market was always going to be difficult, and the most sensible path to avoid extremely damaging economic dislocation for the UK was to maintain close alignment with EU trading rules and regulations. Close alignment was made legally binding in an agreement between the UK and EU in December 2017. That agreement was designed to uphold the 1998 treaty between the UK and Ireland that ended the conflict in Northern Ireland, which removed the hard border between Ireland and Northern Ireland. Preserving the open border after Northern Ireland is no longer in the common market requires close alignment with the EU.

The Irish border was largely ignored during the referendum but it has dominated the Brexit negotiations. Close alignment with the EU on external customs arrangements and internal regulation essentially prohibits the UK from negotiating independent trade deals with other countries that would likely alter those customs arrangements and have a different regulatory regime. It was precisely those independent trade deals that Brexiteers believed was the ultimate promise of Brexit. The realization that an independent trade policy is impossible under the terms of May’s deal has caused the exodus of Brexiteers from May’s cabinet and pushed those not in government to seek her removal.

But May is soldiering on, telling Parliament, “We can choose to live with no deal . . . risk no Brexit at all . . . or unite and support the best deal that can be negotiated.” Crashing out of the EU with no deal is so catastrophic it’s not possible to consider it a viable option. There is no conceivable Parliamentary majority for the deal May negotiated. It is possible that could change in a similar way to how the U.S. Congress first rejected the TARP bailout during the 2008 financial crisis, only to quickly pass it once the markets tanked. But that’s not an advisable option.

It is the other choice that May raised in her comments to Parliament, however, that is the most interesting: “no Brexit at all.” Even as hundreds of thousands took to the streets to demand it, May has rejected even considering another referendum that could result in no Brexit. But now she has raised it as a real option. The politicians have made a total mess of Brexit from the start. The only sensible choice now is for a People’s Vote now that they know what Brexit really looks like. It’s the only way out of this crisis that will have any legitimacy.

Ken Gude is a senior fellow for national security at the Center for American Progress.