Brexit. Take it or Leave it. 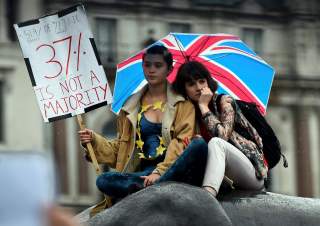 A month ago, Prime Minister Theresa May of Britain convened a cabinet meeting at her residence, Chequers, to hammer out a policy paper for Britain’s exit from the European Union. At first, it looked like the white paper had done the trick uniting the cabinet, but in less than three days the Secretary of State for Exiting the EU, David Davies, and the Foreign Secretary, Boris Johnson, resigned followed by several junior ministers.

Worse, according to polls, only 12 percent of people in Britain support the Brexit approach advocated in Theresa May’s white paper. The British people looked for a clear, simple and intelligible model for exiting Britain from the European Union. This is not what the Prime Minister delivered.

Over 104 pages the government sets out a complicated mechanism aiming at solving a large number of issues selecting an approach which not been tried before. Highly political issues like the Irish border question and migration are mixed with Britain’s participation in the European Chemicals Agency, the European Aviation Safety Agency, and the European Medicines Agency—not exactly questions that enthuse the ordinary voter.

Since spring 2017 when Theresa May formally informed the EU that Britain was leaving, she has given three or four major speeches which—in isolation—were good. Unfortunately, when they are taken together, they blurred the issue by not pursuing a well-defined target. Additionally, in some cases, her speeches came close to contradicting past ones by beefing up, or toning down what was said previously. Furthermore, government ministers have arrogated to themselves the right to state their point of view and often do so with scant regard to the government's position or the Prime Minister's speeches. This left a baffled electorate trying to figure out what the Prime Minister, the government, the parties, and parliament had to offer as a platform for Brexit. In addition, parliament has been roiled with tumultuous voting in the House of Commons and close to civil war between the House of Commons and the House of Lords over how to proceed with Brexit.

The government maintained that it had the prerogative to conclude an agreement without submitting it to parliament. Parliament contested this. After an acrimonious debate, the government came off second best, denting its reputation. Had the government chosen to work in tandem with parliament, the electorate could have been prepared for what was in store. Instead of a nod from parliament to go ahead soothing uncertainty among voters, debates in Parliament confirmed many voters’ instinct that there is something wrong with the approach chosen. If MPs do not like it and find it difficult to gauge its full effect why should voters support it and how can they be expected to understand it?

Theresa May's handling of Brexit is a prime example of trying to unite people of different views by opacity and complicated solutions with the inevitable consequence that the more people look at it, the less they like it.

The next step is meeting the EU.

Theresa May has cajoled, nudged, made promises and probably also issued threats to garner support for the white paper. She has boxed herself into a position where she cannot come back and ask reluctant politicians to support an amended version. If she has any doubts, there is no need to look further than her own Constituency (Maidenhead) with the chairman of the Conservative Association saying: “If it were to be diluted it would ultimately not be acceptable.”

Furthermore, Theresa May and her government seem to forget that Britain actually decided to leave the EU. The future relationship is not about how many of the advantages flowing from membership Britain can keep. It is about negotiating an agreement between a non-member state and the EU while preserving what is called the community preference for member states. The leave supporters in the government and the hardcore Brexiters have refused to admit this state of affairs and seem likely to continue to do so. May will have to confront them with this truth or walk away from negotiations, falling back on no deal outcome.

Negotiations with the EU started March 29, 2017. According to article 50 of the treaty they have to be concluded and subsequently approved at the latest by March 29, 2019. Britain's government and parliament, plus the EU ministerial council and the European Parliament, must say yes according to existing procedures, which in some cases can be time-consuming. This means without any formal approval, Britain will leave without any agreement. Few disputes this will lead to chaos.

According to news media, Britain has launched a major offensive to seek support among EU member states for the white paper. Prime Minister Theresa May has gone to see German Chancellor Angela Merkel and French President Emmanuel Macron to find sympathy and hopefully see them step in and soften the EU position. British ministers have visited several EU member states over the holidays. This is understandable. The danger is that if these negotiations and visits are not handled adroitly, it can easily be seen as an effort to divide the member states and may backfire. This is especially if the other member states get the impression that Britain is gambling on Germany and France forgetting that there are twenty-seven member states that also have strong interests to defend in the Brexit negotiations.