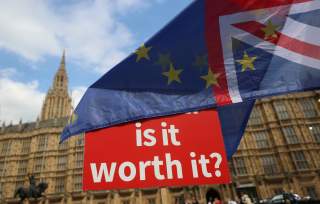 There is a trade-off between reclaiming national sovereignty by severing ties with the EU and minimizing the economic costs of Brexit. A “soft Brexit” where the UK remains in the EU’s Single Market and continues to adhere to EU regulations, trade policy and free movement of labor would be the best option for the UK’s economy. But it would also be viewed as a betrayal by most Brexit voters. On the other hand, there is only minority support in the UK for rejecting the European social model in favor of its American counterpart and left-behind voters may reconsider their opposition to European integration as the costs of divorce become apparent.

The heart of the problem is that Brexit has divided the UK, not only between leavers and remainers, but also over what should replace EU membership. There is no option that a majority of the country supports. Theresa May will try to muddle through, forging a compromise that can keep her government in power. But it is hard to envisage any scenario that does not leave the UK poorer and more isolated from its traditional allies than if there had never been a Brexit referendum.

Jonathan Story is emeritus professor of international political economy and author of The Political Economy of Financial Integration in Europe: The Battle of the Systems.

Britain could have stayed in the EU prior to June 23, had Cameron revoked the Heath definition of the EU as a supranational institution, to which the UK is subordinate. Neither France, nor Germany, nor Italy recognize such a definition. Remainers do not want to follow the Germans and have a more national definition of the EU. They are campaigning to keep the UK in an EU where the UK remains supranationalist No Uno. Trouble is: it doesn’t sing at home.

It’s for the British government to decide whether they should vote again. Since polls are now completely politicized, it would be unwise of either side to think they would win. In the 1960s, 13 percent of voters were floaters; by the early 2000s, it was 40 percent. It is probably rather higher now. Labour has veered sharply left and is defining itself by identity politics and anti-Semitism. It is being led by a man who thinks that all the sins of the world are caused by Israel and the West. Corbyn is as extreme as the U.S. far right.

If May has her way, the UK will be a vassal state; the pretense will be that the UK is independent. The aim of Whitehall, Brussels, and 10 Downing Street is to either keep the UK semi-attached or to get it back in. But if it goes back in it will pay its full dues and have to join the Euro.

I propose that the UK’s official supranationalism, which gives it allies in Brussels, is a failure. It was bound to be a failure. Merging a mosaic of states and peoples, with different languages, legal traditions, histories, tax systems, and economic structures—not to speak of cultures—into a United States of Europe was, is and will remain a dream. The trouble with utopias is that they fast become dystopias. The EU is presently a dystopia. A truly European response would be to create a European alliance of democratic constitutional states, with Brussels cut down to size, its pretensions scaled back. If that could be achieved—there is no sign of it—Europe could come into its own. It is already the wealthiest region of the world. Less integrated, it would be more united.

Richard G. Whitman is a professor of politics and international relations at the University of Kent and an associate fellow at the Chatman House.

The Brexit process is now entering its most challenging phase. As the March 2019 deadline for the UK’s departure from the EU moves closer, there are still a formidable range of issues to address through negotiations if there is going to be an amicable Brexit. With all of the negotiations so far focusing on the terms for the UK’s departure, no agreement is likely to be reached on the post-Brexit EU-UK relationship.

If the Brexit negotiations look to have been a tough undertaking, they will be nothing compared to those on the future relationship. A weak government has played a weak negotiating hand poorly—and exacerbated deep divisions within the UK’s political class. The UK government’s poor negotiating performance has been it easy for the EU’s remaining 27-member states to maintain a consistently united position.

It is difficult to see the UK’s relationship with the EU disappearing from UK politics over the next decade—even if the UK does Brexit next March. Polls consistently show “Leave” and “Remain” voters largely holding to their original voting positions. It is also difficult to see how calls for a second referendum on the issue of the future relationship with the EU can be held before the departure date mandated under the Article 50 provisions that cover a country’s departure from the EU.

The current UK government may be planning to leave the EU, but the EU isn’t going to leave British politics. The negotiation and ratification of a future EU-UK relationship is going to extend beyond the next UK General Election scheduled in 2022. The future relationship with the EU is going to be an issue that continues to divide parliamentarians, parties, and set the Scottish and Welsh administrations against Westminster. It will continue to divide the electorate against itself and could lead to the breakup of the existing political party system.

Guntram Wolff is the director of Bruegel and author of An Anatomy of Inclusive Growth in Europe.

In June 2016, British citizens voted to exit from the EU. During the past two years, negotiation on the terms of the divorce made progress, but not the equally important design of the future relationship. The UK government’s recent proposal for its future relations with the EU should be taken seriously in the EU. In its recently released “white paper,” the UK sets out its ideas for an economic and security relationship after Brexit.

The EU has reacted with some skepticism to the proposed economic relationship. The main worry is that the rather complicated arrangement could undermine the legal order of the EU. Some fear that the proposal amounts to cherry-picking, leaving the UK essentially as an EU rules-taker in goods markets but without a similarly close relationship in services trade and free mobility of labor. The fear is that other EU members might find this attractive and decide to leave as well. The situation in Ireland after Brexit also remains a major concern.

All of these worries need to be carefully considered, but they also need to be weighed against the dramatically changing geopolitical situation. Faced with a possible trade war with the U.S. and the continuous rise of China, regional alliances become more important. The UK will not only remain an important European power, it should also remain an important European trade and security partner. As Michel Barnier, the European Commission’s chief Brexit negotiator, wrote in a recent opinion article, the EU has “an interest not only to strengthen the EU’s role in the world but to cooperate with the UK as a close partner.” Specifically, on security—in Mr. Barnier's words—“the EU wants very close cooperation” with the UK, focusing on agreements between law enforcement and intelligence services.

The EU could do more, though, in its negotiations on the future economic relationship. It would benefit from approaching the negotiations as a chance to secure guarantees on its priorities—such as greater clarity on how European jurisprudence will be applied in the UK. The EU could also work to prevent regulatory competition from the UK and ensure an appropriate contribution from the UK towards the EU budget. Finally, the EU could seek greater assurances on customs arrangements and safeguard clauses in case the UK ultimately decided to diverge on regulation.

It makes sense for the EU to negotiate rather than concentrate on staying within pre-set limitations. Agreement on a sensible direction for both parties should still be possible this year. A two-year transition period would then allow for a reasonable, careful negotiation of what is best for both sides. Neither the UK nor the EU would benefit from a no-deal Brexit.