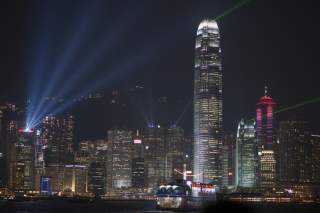 HONG KONG—Central Hong Kong after dark offers a riot of neon. Multicolored, flashing lights race up and down its skyscrapers in a melange of patterns, while more stationary signs advertise global brands—Samsung, Sony and many others—as part of a nightly show that illuminates the harbor.

But a more ominous name recently joined the mix. Flashing white lights on one tall building now spell out in large characters, with no elaboration needed, the words “Chinese People’s Liberation Army”. It’s a blunt reminder of where ultimate power would lie if an escalating political showdown leads to protracted, perhaps violent, disputes between Hong Kong citizens and mainland Chinese authorities. At present, there’s no sign of a peaceful end to what Anson Chan, a former number-two government official and respected advocate of greater democracy, has forecasted as “a very long, hot summer.” A former Beijing official has even warned that Chinese troops might be summoned if an “Occupy Central” demonstration—the pro-democrats plan to temporarily close down the business district later this year, unless the political system is liberalized—gets out of control.

At issue is how far and how fast Hong Kong people can move toward having a fully democratic political system to manage their own affairs within a broader Chinese context. Beijing promised this when it regained sovereignty over the former British colony back in 1997—“Hong Kong people governing Hong Kong” with “a high degree of autonomy” was the pledge—but it has alternately stalled and reneged ever since. The reasons aren’t stated clearly but probably reflect the Chinese Communist Party’s perennial suspicions, if not paranoia, about any political group outside its control, and are spurred by an intensified crackdown on all dissent inside China since Xi Jinping became president two years ago. According to a former U.S. consul general in Hong Kong, the ruling party worries that a successful campaign for greater autonomy could prove infectious and spread across the border.

Thus Li Yuanchao, China’s vice president, has called the Occupy Central movement an illegal campaign that could “delay universal suffrage and wreck the prosperity and stability of Hong Kong.” Like other Beijing leaders, he favors a vetting system that produces a ballot for the city’s highest office that lists only “patriotic” candidates who “conform to the standard of loving the country and loving Hong Kong”. In practice, that means barring anyone who doesn’t promise to faithfully follow the mainland’s party line.

The immediate dispute concerns drafting rules for electing a new chief executive (the senior government official) in 2017 by universal suffrage for the first time. While Beijing wants to block any candidate it doesn’t like, Hong Kong activists want to leave the ballot open for someone with a demonstrated degree of popular support, perhaps from their own ranks. The dispute also raises the more fundamental issue of how long Hong Kong’s 7 million people can retain the broader civic, political and legal rights that already give them freedoms unknown elsewhere in China—or whether Beijing is trying to take them away.

Hong Kong residents have just demonstrated forcefully that they want an honest choice, no matter what Beijing prefers. Last week (June 22-29), pro-democracy activists organized a referendum that asked everyone with a Hong Kong identity card to pick one of three ways of ensuring that the future method of choosing candidates would be an open one. They hoped 300,000 people would take the time to vote online (at www.popvote.hk) or in person; in fact, 787,767 voted, despite hacking that sometimes shut down the website. Though the tally is mainly symbolic and has no official standing, the Hong Kong and Chinese governments will have difficulty ignoring the sentiment behind the huge turnout. In fact, Rao Geping, a Beijing academic who advises the central government on Hong Kong policy, has already said the two governments “have to take it seriously”.

A compromise is needed, but it won’t come easily. Beijing contends that all three choices in the unofficial poll violate specific terms of the Basic Law, the Chinese legislation that serves as Hong Kong’s de facto constitution. The city’s respected bar association, steeped in British common law, agrees, as do Ms. Chan and other pro-democracy advocates who have stayed apart from the Occupy Central movement, because they find its tactics too confrontational. But they contend the current system, which relies on a 1200-person nominating committee packed with pro-government worthies, can be amended to achieve the desired democratic result. The Basic Law says the committee should be “broadly representative”, which it is not; reformers would change the committee’s rules and membership so that a popular candidate lacking Beijing’s stamp of approval could be nominated along with establishment favorites, giving voters some clear choices. But any solution would have to overcome both differences between mainland officials and Hong Kong politicians, as well as divisions among the democrats themselves.

Without compromise there can be no winners, only adverse consequences that would extend far beyond Hong Kong itself. If the Chinese Communist Party imposes its will, with the acquiescence of an often-supine Hong Kong government, that would risk stability in the country’s richest city, one that still plays an important role in China’s financial affairs and globally. Doing so would also signal Asian neighbors that Beijing has little interest in compromise if force can produce victory, however pyrrhic, and these nations have severe territorial disputes with China. In addition, the “one country, two systems” policy that governs Hong Kong is supposed to show Taiwan how benevolent mainland rule can be; a forceful resolution could sabotage the improved cross-straits relations that prevail these days. In general, the world would be reminded that dealing with China can be difficult, perhaps dangerous.

But an increasingly intolerant China shows no sign of wanting compromise. Instead, its press and spokesmen have accused the democrats of seeking outright independence, which they are not, and claim senior British and American diplomats based there are interfering in Hong Kong’s internal matters whenever they suggest more democracy would be a good thing. The Beijing Global Times newspaper even has accused a foreign “black hand” of fomenting anti-China feelings and suggested it may belong to former Deputy Defense Secretary Paul Wolfowitz, who visited Hong Kong recently (proving that it doesn’t understand who has clout with the Obama administration). More importantly, Beijing has issued a White Paper asserting that Hong Kong activists have a “lopsided” understanding of political reality, that the city has only as much autonomy as China chooses to give it.

As this suggests, Beijing’s complaints extend far beyond the technicalities of election law. As President Xi centralizes political power on the mainland, his officials seem increasingly fed up with obstreperous Hong Kong politicians who want more leeway and they complain that its people retain their “mentality as colonial subjects.” There is also a traditional disdain of many Party bureaucrats toward Hong Kong merchants whom they contend lack political resolve and a sense of national mission (though some of these officials eagerly funnel their own ill-gotten wealth into Hong Kong). The Xi regime says Hong Kong should be grateful for the economic benefits it receives and stop making trouble.

For the most part, Hong Kong business leaders support Beijing, largely to protect their own commercial interests. Several locally based chambers of commerce (but not the American chamber) have voiced strong opposition to the Occupy Central movement. The accounting industry’s big four—EY, KPMG, Deloitte and PwC, which all have major mainland accounts—have placed newspaper ads denouncing the movement. The four biggest banks in Hong Kong, including HSBC and Standard Chartered, stopped advertising in Hong Kong’s largest-circulation newspaper—one often critical of Beijing—because Chinese officials told them to. In Hong Kong, there is a long history of communists and capitalists cooperating to oppose democratic politics.

But the Hong Kong public has its own grievances. Millions of increasingly wealthy mainlanders—who often seem rude and demanding—visit each year and strip shop shelves of products (like baby formula) that are either unavailable or distrusted back home. A founder of the city’s main pro-Beijing political party concedes that most residents don’t trust the communists and don’t want them in charge. Thus an estimated 180,000 people gathered in Hong Kong’s Victoria Park on June 4 to commemorate the June 4 killings near Tiananmen Square twenty-five years ago, a memorial banned elsewhere in China, and several hundred thousand people gathered Tuesday for an annual demonstration—one that predates the Occupy Central movement—that also expresses displeasure with Communist policies. Many Hong Kong residents believe the existing system has given them three unpopular and ineffective chief executives in a row—all too eager to please Beijing—and hope universal suffrage will bring to office a more efficient government headed by someone more attuned to their own problems.

Despite all this, some political actors, like Ms. Chan, believe compromise remains possible. She notes that a 2010 dispute over how to elect the city’s legislature was resolved before the worst could happen. Mainland officials and pro-democracy activists met in secret and worked out a solution that nudged the democratic cause forward a bit. She says the pattern could be repeated, that no one wants chaos in Hong Kong.