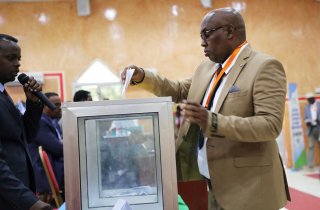 Somalilanders will celebrate thirty years since the reassertion of their independence from the Somali Democratic Republic, a union they voluntarily joined in 1960 after first winning their independence, in May. This year’s celebration will be significant for two reasons. The celebrations are to take place at the height of an election campaign for both parliament and local government. Also, following this year’s celebration, Somaliland will officially have been outside its union with Mogadishu longer than it was ever inside the union. In fact, two-thirds of Somalia’s population had not been born when Somaliland and Somalia shared the same flag.

Somali unionists have denounced the artificiality of the division between Somalia and Somaliland. Both countries are ethnically Somali, although some Bantu also live in southern Somalia. On paper, the greatest difference between Somaliland and Somalia is clan: Somaliland is largely Isaaq with a large Darood population in its less populace east, while the Darood and other clans predominate in other regions of Somalia. Neither ethnicity nor clan, however, alone mandate union. After all, there are two Romanians states, two Albanias (one of which is called Kosovo), and the Arab League counts twenty-two countries. Most Somalis, even those who seek to force union with Somaliland, see no hypocrisy in their support of the Palestinian cause even as they would never argue that the West Bank should again subordinate itself to Hashemite rule for the sake of Arab unity. Back to ethnic Somali territories: Djibouti, Ethiopia’s Ogaden region, and Kenya’s North Eastern Province are each largely ethnic Somali, even if they remain outside any serious unionist debate. Simply put, history and culture often mean more than ethnicity or tribal identity in determining the case for self-rule.

This is why the juxtaposition between Somaliland and Somalia’s elections matter: Somalilanders have a growing history of successful electoral democracy. Less than one hundred votes determined the outcome of one presidential election. Last month, I had the opportunity to witness election registration in Laascaanood, the capital of the Sool region of Somaliland.  Men and women stood in separate lines to wait for technicians to scan their irises in order to secure the vote, while fifteen-year-old kids, excited at their ability to vote for the first time, hung out together while awaiting their turn. Somalia was supposed to have one-man, one-vote elections, but a multi-billion international investment has laid neither the technical nor the security groundwork to make these happen. Instead, U.S. Ambassador Donald Yamamoto and Special UN Representative James Swan, who was a former U.S. ambassador to Djibouti, seek to limit election participation to a few hundred notables. Not surprisingly, many Somalis now balk given the growing tendency of both Yamamoto and Swan to behave like colonial governors and incumbent Somali president Mohamed Abdullahi Mohamed, also known as Farmaajo, to put his own fingers on the scales in order to select electors who will back him. Somalis, meanwhile, suggest that the combination of Farmaajo’s ambition and Yamamoto and Swan’s centralization push, and their collective denial of the reality of the situation, risks returning Somalia to the political and security chaos of the early 1990s.

It did not have to be this way. Initially, after the disintegration of Somalia amidst the collapse of Siad Barre’s dictatorship, United States pursued a de facto two-track policy in which the State Department would calibrate policy toward Somaliland and Somalia separately given the divergent issues the two countries faced. In Somalia, successive U.S. administrations sought to end the civil war and stop warlordism, counterterrorist groups, and work to re-establish national institutions. In Somaliland, in contrast, the State Department sought to build the capacity of political parties and help build democratic institutions. The United States likewise recognized that Puntland was far more functional than the rest of Somalia. Johnnie Carson, the assistant secretary of State for Africa, formalized the two-track approach a decade ago.

Somali critics of the U.S. approach argued that it encouraged clannism and division. At no point in its work with Somaliland, however, did Washington imply recognition of Hargeisa. American diplomats would visit Hargeisa regularly; they would just refrain from getting their passports stamped or any action that would imply recognition. USAID or the National Endowment for Democracy likewise would sponsor projects in coordination with whatever government controlled the area in which they wanted to work. Somali nationalists might complain about divisions in their society but, in practice, their grumbling was meaningless.

Yamamoto, however, had other ideas. Rather than consolidate Somaliland’s democracy and Puntland’s stability, he sought to concentrate all engagement through Mogadishu in order to help empower the government there and help it build patronage. That, of course, has backfired. Like the warlords who ran the country during the Black Hawk Down era, Farmaajo used concentrated resources less to build the state than to punish his competitors or political enemies.

Nor has centralization reduced regional discord. While the international community encourages dialogue between Somalia and Somaliland, preemptively empowering Mogadishu has dis-incentivized compromise. Consider, for example, airspace. Just as Taiwan controls its own airspace, so too, has Somaliland traditionally. This, in turn, has enabled Somaliland to welcome Ethiopian Air and, in years past, Fly Dubai. After Yamamoto approved the transfer of Somaliland airspace to Mogadishu, however, the Somali government responded by seeking to isolate Somaliland by ending air travel to it. Yamamoto’s strategy was analogous to empowering mainland China to determine unilaterally that no passenger flights should service Taipei. Appeasing dictatorships at the expense of democracies, however, never brings peace.

Somalia is near collapse. On Jan. 30, 2021, diplomats from countries involved in Somalia met with Farmaajo at Villa Somalia, Somalia’s equivalent of the White House, in order to resolve the political impasse between Farmaajo and the presidents of Puntland, Jubaland, and Somalia’s other federal states. In effect, it was an intervention as Farmaajo’s political brinkmanship risks pushing the country over the edge. Yamamoto did not attend the meeting, however: Despite billions of dollars invested in Somalia, the three-mile-long road between the airport green zone, where Yamamoto lives, and Farmaajo’s residence remains too dangerous.

Yamamoto may have been absent, but he is just as much in need of an intervention as Farmaajo. Able diplomats neither double down on failure nor put their own egos above the success of the countries whose stability they seek. Somalia’s ruin has always been over-centralization. Somalis and their supporters previously pulled Somalia back from the brink by embracing a two-track policy and federalism. It is time to return to what works. Berbera, Somaliland’s main port city, is booming. Hargeisa, Somaliland’s capital, makes up for in peace and security what it lacks in paved roads. Puntland’s capital, Garowe, is expanding rapidly as new office buildings rise above markets and restaurants. In each place, men and women stroll along streets, sample new restaurants, or shop at new malls without fear that damage will be done to lives or property. It’s not the Somalia most Americans imagine. Mogadishu is what they imagine though. Rather than undermine such progress, the United States and the broader international community should support it. A two-track policy works. So, too, does federalism. If Yamamoto and Swan object, then Secretary of State Antony Blinken and UN Secretary-General António Guterres should recall them. Somalis deserve better than would-be colonial governors encouraging dictatorship and once against pushing the country to the brink.