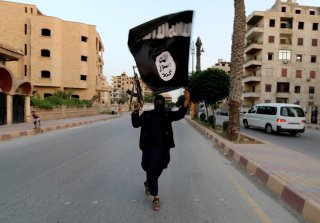 The Alexandria courtroom provided the setting for the much-anticipated so-called “Beatles” terrorism trial, which saw British Islamic State member El Shafee Elsheikh, otherwise known as Jihadi Ringo and captured in early 2018 by the Kurdish Syrian Democratic Forces (SDF), tried on eight counts, ranging from hostage-taking to conspiracy to providing material support to terrorists. His co-defendant, Alexanda Kotey, had earlier pled guilty. Both had been extradited to the United States in 2020 after the U.S. government agreed to remove the possibility of the death penalty.

Elsheikh’s daily outfit of neat glasses and smart shirts constructed a student look designed to make him appear more sympathetic, but his swaggering walk betrayed the same arrogance that drove him to play a key role in a hostage-taking scheme that resulted in the taking of over two dozen Western hostages—mostly journalists and aid workers. Four Americans—James Foley, Steven Sotloff, Peter (Abdulrahman) Kassig, and Kayla Mueller—were killed, the first three beheaded as part of ISIS propaganda videos. Two British citizens—David Haines and Alan Henning—were similarly murdered, while another, John Cantlie, remains missing. A range of hostages from European countries were brutally tortured but released; others, from Japan and Russia and beyond, were not so lucky.

On April 14, Elsheikh was found guilty of all charges. He awaits sentencing later this summer. Kotey has been sentenced to eight concurrent life sentences, with the possibility of a return to the United Kingdom after fifteen years, a stipulation of his plea agreement. Beyond the immediate impact on these terrorists and the families of their victims, though, the trial has significant implications for U.S. counterterrorism, the ability of the justice system to prosecute international terrorists, and the future of U.S. hostage policy.

The first conclusion to be drawn from the Beatles trial in Alexandria is also the most important: Americans so rarely get to see an international terrorist brought to justice here in the homeland, and the trial showcased the power of the American justice system to prosecute and incarcerate such individuals. The constitutional right to a speedy and fair trial—as stipulated by the Sixth Amendment—was rigorously applied by Judge T.S. Ellis III throughout the court proceedings that lasted two-and-a-half weeks and heard testimony from thirty-five prosecution witnesses. The trial thus stood in marked contrast to the futile two-decade-long effort to bring to justice Khalid Sheikh Mohammed (KSM), the mastermind behind the 9/11 attacks, and the other terrorists incarcerated at the U.S. naval base in Guantanamo Bay, Cuba. A total of some 800 persons have been imprisoned at the facility since 2002. Fewer than forty currently remain there. None have been accorded anything even resembling the due process that unfolded in Alexandria in late March through mid-April. It is a stain on our democracy.

The treatment of the Guantanamo detainees, in fact, figured prominently throughout the trial. A succession of witnesses, that included former hostages, testified how the “Beatles” justified the ill-treatment of their American captives with that of co-religionists there. Just as KSM was subjected to waterboarding and other torture, so were the Western hostages held by ISIS. They were also attired in orange jumpsuits like the Guantanamo detainees in each of the cruel execution videos that ISIS subsequently released. Indeed, throughout the trial, the stanza from W.H. Auden’s well-known poem, “September 1, 1939,” came to mind. “I and the public know/What all schoolchildren learn/Those to whom evil is done/Do evil in return.” This is not in the least meant to imply any moral equivalency between the U.S. treatment of the Guantanamo detainees with that of ISIS’s heinous treatment of its captives, but to illuminate the lasting, however unintended, consequences of America’s ill-conceived detention policy and the constant references to it throughout the trial.

The Guantanamo debacle has had implications for families of victims, too, and the Alexandria courtroom provided a venue where families of the fallen and former hostages could speak directly to their tormentors, an opportunity unfortunately all-too-rare in the post 9/11 era. In one of the trial’s regular themes, the victims one by one faced the defendants with heads held high. One of the family members, defiant, told Kotey and Elsheikh at the former’s sentencing that they would no longer be allowed to torment her. “I forgive you,” she declared—a heartbreaking, cutting, and yet so hopeful show of grace and fortitude. Judge Ellis, too, displayed compassion not earned by the defendants’ actions. Soon after sentencing Kotey to eight concurrent life sentences, Ellis referenced the terrorist’s aforementioned plea deal: “I do hope you get to go home,” Ellis told the terrorist.

The trial, then, showcased America at its very best: responding to unspeakable horror and unimaginable evil with patience and the protection of a defendant’s human rights. In fact, precisely that point was made by the father of one of the victims, at Kotey’s sentencing. Carl Mueller had lost faith in America and his government during his daughter’s ordeal, he said, but faith had been restored during the trial. Judge Ellis, who has sat on the court since the Reagan administration, was moved to tears by the sentiment.

The Beatles trial was not a victory of counterterrorism—conversely, counterterrorism failed on this occasion, because crimes were committed in the first place. But it provides a promising model for how the justice system can effectively respond to terrorism. As Christopher Costa, a retired U.S. Army Special Forces officer and the former senior National Security Council official responsible for counterterrorism, who played a critical role in the kinetic counterterrorism fight against the Islamic State, writes, “legal arrows in terms of investigations, extraditions, and trials are more potent than simply killing terrorists.” Can that be expanded? Can it provide a model for how to finally end indefinite detention at Guantanamo Bay, in U.S. civilian court? At the very least, the Beatles trial opened the door to such new possibilities.

Secondly, the trial provided a timely reminder that terrorism remains an important and persistent threat, and that Western defense strategists cannot completely move on to other priorities. Despite our collective (and quite correct) laser focus on Ukraine over the past three months, international terrorism has continued to purr—most notably during a string of savage attacks in Israel. The trial clearly depicted the enduring ability of the twisted and corrupt Salafi-jihadist ideology to inspire individuals to acts of barbary.

Elsheikh said almost nothing throughout the proceedings. As is his constitutional right under the Fifth Amendment, he was not required to testify in his defense. Judge Ellis emphasized to the jury that Elsheikh’s refusal to do so should not be taken as suggestive of any guilt. “I do not wish to testify” was the only word he spoke. But his silence and general demeanor arguably imparted an image of unapologetic self-righteousness if not outright remorselessness. Indeed, the defense would repeatedly claim that Elsheikh was just a “simple ISIS soldier” inadvertently caught up in the heinous acts of violence attributed to that group and a case of mistaken identity. The prosecution drove home the point that in at least a half-dozen videotaped interviews with the press after his capture, Elsheikh admitted to being one of the “Beatles.”

The twenty-five-page long letter sent by Kotey to Judge Ellis hoping to avoid incarceration in one of America’s high-security, “supermax” prisons highlighted the absence of remorse and continued justification of ISIS’s savagery and brutality. In it, Kotey bemoaned his feckless youth and socio-economic disadvantages that he experienced growing up in Britain. A convert to Islam, Kotey explained the gravitational pull of the Salafi-jihadi ideology promulgated by terrorist movements like both Al Qaeda and ISIS to “young Muslims of my generation.” Citing the CIA’s “black sites,” Guantanamo, and the U.S.-run Abu Ghraib prison in Iraq, Kotey blamed the United States and the West for waging a war on Islam as the reasons he left Britain to fight Syria in March 2012. It was imperative that he do so, Kotey explained, even if it meant never seeing his then-eight-year-old daughter. ISIS had “no monopoly on the use of violence” in the region, he declared, before fatuously claiming that, “contrary to what might have been perceived, no malice was harboured, personally, towards the captives, nor their families.” Kotey’s utter lack of remorse and his hollow protestations that he was a soldier simply executing his duties underscore how the extensive counter-radicalization efforts undertaken by the British government following the 2005 London transport suicide attacks failed to have any impact on Elsheikh, Kotey, and the 800 or so other Britons who joined ISIS and its precursor groups until its caliphate was finally defeated in 2019. This ideology, and the groups it inspires, remain a threat.

Finally, the trial revealed, in an unprecedentedly harsh light, the inconsistencies and incredulity of American hostage policy—which not only refuses to pay ransoms but bars families from negotiating for their loved ones—as well as its failure to deter terrorist kidnapping of Americans. Repeated testimony from the European survivors—whose governments either allegedly paid ransoms or did not prevent their families from independently raising funds for that purpose—explained how the “Beatles” separated their captives based on whether their governments paid ransoms or did not—with the Americans, British, Japanese, and Russian hostages receiving appreciably worse treatment, and ultimately paying with their lives. The testimony thus underscored how utterly inconsequential America’s “no concessions” hostage policy was either in deterring the future seizure by terrorists of U.S. citizens or winning the safe release of those held captive. The fact that both the United States and Britain historically have been the countries whose citizens are most frequently taken hostage challenges the wisdom and effectiveness of a policy that reportedly was the product of an off-hand remark by then-Secretary of State William P. Rogers that the United States must have a “masculine policy” in responding to terrorist threats and demands. At the time of its adaption in 1973, this policy resulted in the immediate deaths of two American diplomats held by Palestinian terrorists. It has continued to account for the acute pain and suffering of American hostages themselves and their families for nearly half a century, as testimony throughout the trial revealed. The trial thus thrust into stark light the importance of a rethink on U.S. hostage policy.