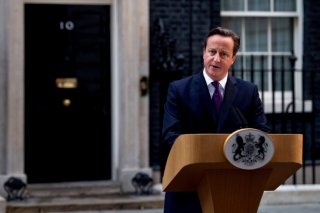 Britain’s David Cameron is back in the seat of prime ministerial power, London’s No.10 Downing Street, with an overall majority in the 650-seat House of Commons. It is a result no pollster predicted. He is the first ruling Tory in Britain to secure a second term in office since Margaret Thatcher in 1987. In no other major European country, in recent times, has a leader responsible for presiding over austerity measures, designed to narrow a gaping budget deficit, pulled off such a feat.

The economy has recovered from the chronic mismanagement of Labour’s years in power before 2010. But there is no feel-good factor evident. Productivity is low, many of the one-and-a-half-million new jobs created since 2013 have gone to migrants attracted by Britain’s open-door economy. The deficit remains alarmingly high.

Cameron is capable in the defense and presentation of policy. But his popularity ratings have been low since he formed a government with the center-left Liberal Democrats in 2010. When he admitted in April that he would not serve out a full term if reelected, it confirmed the suspicions of many that his appetite for power was waning and that he looked forward to securing a major international job in which he could hone his talents for diplomacy and networking.

In office, he was wedded to safe centrist policies. In the campaign, he was reluctant to offer a robust conservative vision and he was only prepared to debate with his main challengers once.

For months, all polls suggested that the Tories and their Labour Party rivals were almost level. Deadlock and a second election before Christmas were viewed as likely.

But Cameron was thrown an amazing lifeline by his adversaries.

Labour clung doggedly to Ed Miliband, an inept and deeply uncharismatic leader with minimal experience in life beyond the political bubble. A series of campaign gaffes confirmed for millions of voters (including many unimpressed by his decision to stand against his brother for the leadership in 2010 and win only with the help of a large, militant labor union) that he would be a national liability if he reached Downing Street.

No longer is the parliamentary left in Britain an alliance of workers, professional people and intellectuals. London lawyers, career politicians, academics and teachers have been imposed on declining cities across England where many faced rejection on May 7. The UK Independence party (UKIP) emerged from obscurity to become the third party nationally on 12 percent of the vote by articulating the concerns of former Labour voters about the impact of social change, as well as state policies shaped around poorly applied multicultural norms.

Miliband, despite his intellectual intensity, failed to offer a coherent economic program to voters well aware of the mess created by high-spending, left-wing governments across the English Channel. His powerful—and arrogant—economics spokesman Ed Balls was the most spectacular electoral casualty of the night. The fact that Balls’ wife is a front-runner to succeed Miliband as leader shows how a party with a supposedly meritocratic ethos is starting to resemble “the socialist in one family” outfits that reigned in Eastern Europe during communist times.

So it was not hard for Britain’s mass circulation press to exploit Labour’s inadequacies—and it did so ruthlessly.

But Cameron showed even less inhibitions than press moguls who were smarting at Labour’s recent bid to curb the investigative side of the print media. He warned that left-leaning Scottish separatists, upon whom Labour could rely for a majority, would insist on fiscal profligacy and nuclear disarmament if they got a taste of power. England would suffer due to the ascendancy of the Scottish National Party (SNP) and its desire to partition Britain. Critics in his own party accused Cameron of deliberately stoking English resentment about the newfound influence of the SNP for short-term advantage, but at the risk of destabilising the already uneasy relationship with Scotland.

Such divisive tactics appear to have paid off. Many people in southern Britain, poised to vote for UKIP, endorsed the Tories because of their fears of instability if an unprepared Labour Party, manipulated by Scottish populists, took office. The demonization of the SNP probably helped ensure that this party enjoyed a landslide victory of just over 50 percent of the vote in Scotland itself. Under a new and energetic leader, Nicola Sturgeon, the SNP won all but three of Scotland’s fifty-nine Westminster seats, decimating the previously dominant Labour Party and, in the process, virtually turning Scotland into a one-party state.

Labour was not the only spectacular casualty. The Liberal Democrats, Cameron’s coalition partners, lost all but eight of their sixty-seven seats, thanks to self-serving behavior in government and past scandals. Along with UKIP, they obtained nearly 20 percent of the UK vote, but they have ended up with less than a dozen seats between them.

The Tories and the SNP, with support concentrated in specific heartlands, have won nearly two-thirds of the parliamentary seats on around just 40 percent of the vote. Flush with victory, Cameron now calls for reconciliation. But it is hard to see how he can reach out to Scots for whom nationalism now has an utterly mesmeric appeal. His room for maneuver is small. Giving Scotland financial independence so that it raises its revenue from Scottish taxes, rather than relying on an annual UK grant is unlikely to work as there would be a huge shortfall of up to £10 billion. In England, there is no appetite for turning Britain into a series of federal units each with identical powers.

Britain now has a multiparty system, and a territorial electoral system meant for an era of two-party politics is only likely to deepen the social alienation that has already ravaged the Labour Party. A proportional electoral system where voting totals roughly match the number of seats would mean that the 49 percent of Scots who opposed the SNP could have their own seats and UKIP and the Liberal Democrats would have ample representation.

But electoral reform would open up an era of permanent coalitions in British politics, something that has its own drawbacks. Perhaps one way forward for the Tories is to promote policies that lessen the divide between ordinary citizens and a hermetic-looking political elite. Polls in Scotland and the rest of the UK regularly show that ordinary citizens are frustrated with big state machines micromanaging their lives and promoting unrealistic policies on crime, welfare and immigration that sometimes have unwelcome side effects.

During his first term, Cameron often acted like a social democrat, causing him to grow disconnected from his party’s electoral base. He gave strong backing for niche causes like green energy and same-sex marriage, and still refuses to switch major spending on international aid to rebuilding the military. In an era of worrying external threats, defense spending has fallen from 5.5. percent in 1985 to only around 2.2 percent this year.

Cameron’s sharpest headache will be provided by his own parliamentary supporters. Many are determined that by Christmas there will be a referendum on membership of the European Union (which Britain was denied before its 1973 entry). He has promised to try and repatriate powers in wide areas of policy from the sprawling and inefficient European bureaucracy in Brussels. Voters, he concedes, will have their say, but there is suspicion in his own ranks about his seriousness in allowing a referendum that would give voters a genuine choice on this emotive issue.

Cameron will have to make an attempt to reconnect with his own party and large sections of the British population tempted by separatism or the populist conservatism of UKIP. If he lacks direction and vision in his second term, the problems of the country and international tensions that are threatening the peace even of northwestern Europe will ensure that any honeymoon for him will be short lived.