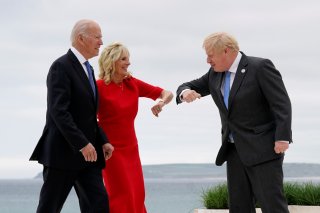 President Joe Biden and UK prime minister Boris Johnson were all smiles at the G7 summit last month in Cornwall, England. But now that the fanfare and diplomatic niceties have died down, the United Kingdom and the United States must work to address how the UK’s economic ties with China could diminish the strength of the relationship.

For at least the past three years, democracies across the world have assessed the threat of the Chinese Communist Party (CCP) with new sobriety. That shift has been a long time coming. While the U.S. media routinely savaged the Trump administration for abrogating American leadership, the reality was that America under Donald Trump led on the most important geopolitical issue of the day: standing up to Beijing’s cheating, coercion, and aggression. The shift started with the Trump administration confronting Beijing’s trade abuses and intellectual property theft, and later extended into issue areas such as Huawei’s penetration of Western digital networks, the People’s Liberation Army’s aggressive posture toward the South China Sea and Taiwan, and the CCP’s genocide against Uyghur Muslims in China’s Xinjiang region. China poured fuel on the fire of a growing global skepticism with its Wolf Warrior diplomacy and pandemic cover-up.

The UK, too, although more slowly and less publicly than the United States, has fortunately recognized that the vaunted “Golden Age” of UK-China relations—characterized by an uncritical engagement that reached its zenith under Prime Minister David Cameron—cannot continue apace. In the last two years, the UK has banned Huawei from its 5G networks, supported Hong Kong’s promised freedoms, and approved sanctions on CCP officials responsible for crushing human rights in Xinjiang. Brexit is a wind at the country’s back for continuing a trajectory of vigilance. Now unmoored from the EU’s slow-moving foreign policy bureaucracy (which last month couldn’t even agree on a statement condemning CCP repression in Hong Kong), Johnson’s government is free to pursue its “Global Britain” agenda.

Presumably, that agenda would include exercising greater vigilance against Beijing, an area where there is much room to partner with the United States. Earlier this year the Johnson government released the Integrated Review, a comprehensive articulation of the UK’s goals and intentions in a post-Brexit world. Although the review was padded with platitudes on global engagement, it served the “special relationship”—and America’s foreign policy goals—by calling for a boost in British defense spending, affirming the United States as Britain’s “most important strategic ally and partner,” and calling for a “tilt” to the Indo-Pacific region.

The intellectual thrust of the review was, by and large, the product of John Bew, a historian and foreign policy ultra-realist who, as an advisor at 10 Downing Street, shares the Prime Minister’s view of the UK as a force for good in the world. Other forces in the Tory ranks are driving a tougher line on China, too. Former Party leader Sir Iain Duncan Smith, a co-chair of the Inter-Parliamentary Alliance on China, played a major role in driving the government’s Huawei decision and the suspension of the UK’s extradition treaty with Hong Kong. UK Trade Secretary Liz Truss, a rising Conservative Party star, has demanded that the World Trade Organization refuse to treat China as a developed country, a status that it currently enjoys.

The Biden administration and the U.S. Congress would be wise to cultivate relationships with the Tories to accelerate pressure for change. Johnson has tried to balance national security without angering the country that has just become the UK’s number one source of imports, and the result has been real incoherence. While the Royal Navy has dispatched a carrier group to the Indo-Pacific, for example, the government did little to condemn Chinese cyber intrusions against members of the UK parliament this past spring. When the CCP invoked the draconian Hong Kong National Security Law to force the closure of Hong Kong’s signal redoubt of free expression, the Apple Daily newspaper, the government could only muster a pro forma tweet by MP Dominic Raab in response to the latest evisceration of freedom in the former British territory.

The mission now for the United States is to highlight for its top ally the national security consequences of its economic decisions. The trade relationship is important but ultimately secondary. Like America, China’s democratic neighbors Japan and South Korea have already made the assessment that China is first and foremost a national security risk (with Australia and India not far behind if they aren’t there already). But UK political and business elites still predominantly see China as a source of trade, investment, and university fees.

It won’t be easy to revise this perspective. The review made clear that the UK government will continue to “pursue a positive trade and investment relationship with China,” and Chancellor of the Exchequer Rishi Sunak’s recent speech in the House of Commons reaffirmed that position, even if it was tempered with a call for a “principled stand on issues we judge to contravene our values.” And powerful commercial interests on both sides of the Atlantic are eager to continue business as usual in China.

So what to do? The UK’s National Security and Investment Act put into law last year gives the government expanded power to review foreign investment deals with national security implications. The Biden Administration must urge the UK to exercise the full extent of those powers. Chinese-owned Nexperia, for example, is in the process of acquiring the Newport Wafer Fab, the UK’s largest semiconductor plant. It seems the Johnson government has failed to appreciate why this is a problem. As one source told CNBC, “This is the largest last remaining advanced semiconductor factory in England being sold to the Chinese and the British government aren’t doing s*** about it.”

Deals like these matter, because a communist surveillance state ought not to control sensitive technology supply chains. Britain shouldn’t cede a crucial piece of technological autonomy. And from a geostrategic standpoint, the CCP has proven it will wield economic leverage in coercive and destructive ways – look at how the CCP stopped Australian imports of wine and beef when Australia simply asked for a real investigation into the COVID outbreak. The U.S. doesn’t want its best friend victimized in similar ways – or worse. What happens, for instance, when Nexperia – with Beijing’s sword at its back – threatens to shut down the chip fab if the UK decides to initiate new trade talks with Taiwan?

There are more steps the U.S. can do bilaterally, beyond urging stronger investment screening. The United States won’t join the Comprehensive and Progressive Agreement for Trans-Pacific Partnership anytime soon, but there’s no prohibitions on quietly encouraging the UK to continue its pursuit of joining a high-standard pact that will reduce its reliance on trade with China. And now that the Biden administration has built some relational capital, why not have Secretary of State Antony Blinken give a speech in the City of London (or on Wall Street, for that matter) to highlight the CCP’s recent retaliation against banking giant HSBC, merely for the bank’s cooperation with a U.S. criminal probe into Huawei? It would send the message to the British financial sector: Even if you love the Chinese market, there’s no guarantee Beijing will love you back.

The Biden administration must also get going on a new free trade agreement between the United States and the UK. Brexit-related complications over the flow of goods and people between Northern Ireland, part of the UK, and the Republic of Ireland, still in the EU, have yet to be resolved. Unfortunately, Biden’s National Security Advisor Jake Sullivan counterproductively, publicly criticized the UK over its stance on Northern Ireland, and the Administration even reportedly ordered America’s acting top diplomat to London to issue a rare demarche to an ally over it. The great danger of no deal isn’t that that Britain will choose China over the U.S. as its preferred economic partner. It’s that Britain will increase its economic dependence on China in ways that will allow the Chinese to silence anti-CCP opinions in the UK and derail the country from taking action on important China-focused human rights and national security issues.

Finally, the British are avowed multilateralists and are genuinely concerned with the protection of the so-called international rules-based order, a favorite line of effort for Team Biden. The presence of Australia, India, and South Korea at the G7 gave momentum to the idea of the D-10, an idea born at the Atlantic Council of a grouping of democracies that can stand together against the CCP’s predations. Cooperation on reforming United Nations bodies and mechanisms that China tries to exploit to its advantage—the International Civil Aviation Organization, the genocide convention, veto power, the hypocritical Human Rights Council, to name a few—would also likely be an idea the British can get behind. Also worth exploring is Robert D. Atkinson’s “NATO for Trade” idea, perhaps useful for consolidating the production of high-end technological components within democratic nations.

The state of the special relationship is strong, and the United States is privileged to enjoy an alliance as robust as this one. But meaningful cooperation will become harder in a post-Brexit world if Chinese money can constrain the UK from joining with the United States in confronting CCP aggression, malign influence, and human rights abuses. America must use diplomacy to convince its best friends that an injection of the famous British courage in the economic space is necessary for protecting the UK’s sovereignty, security, and values. A special relationship that is able to do less is a realistic consequence of inaction.