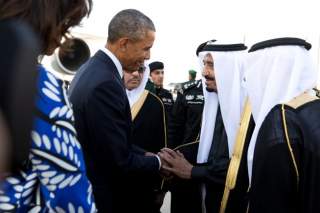 It’s hard to get out of a bad relationship. The good times may be over and the once vibrant connection may be dead, but people just can’t admit that it’s time to say goodbye.

Countries have the same problem, especially the U.S. Washington has spent decades collecting allies like many people accumulate Facebook “Friends.” Virtually never, irrespective of the changed circumstances, does America drop an ally. Indeed, the less relevant the ties the more insistent U.S. officials become in demanding that the relationship be “strengthened” and “expanded.”

With Valentine’s Day almost upon us, the Obama administration should take an unsparing look at the ever-growing crowd of American allies and ally-wannabes. It’s time for Washington to send the equivalent of a “Dear John” letter to a half dozen foreign capitals.

Where to start? There are so many undeserving deadbeat friends.

U.S. officials make much of shared values while issuing military guarantees and writing lavish checks to scores of nations. No one can mistake Saudi Arabia as a country that America has much in common with other than commerce in oil and the occasional common enemy, such as Osama bin Laden.

However, no alliance is necessary for the two states to cooperate when their interests coincide. Indeed, the Saudis must sell oil to survive:  they will cash anyone’s check, friend or foe. And when the monarchy is under threat, it will respond vigorously, even ruthlessly, without outside prodding.

When it comes to values, Riyadh is an extraordinary embarrassment to the United States. Essentially a totalitarian state, the monarchy plunders people, brutalizes political opposition, suppresses religious expression, and even exports Sunni tyranny—to next door Bahrain, for instance. The late King Abdullah was hailed as a moderate and modernizer, but that was only in the context of one of the least free societies on earth. And his successor King Salman seems determined to halt if not reverse the minuscule progress of the last two decades.

It’s time send Riyadh a text message breaking up. The two governments can still cooperate where appropriate.  But there should be no more presidential visits to pay respectful obeisance to the Saudi throne. There should be no more intimate, hand-holding meetings at the president’s retreat. The U.S. military no longer should be treated as an inexpensive bodyguard for the al-Saud family, ready to do Riyadh’s bidding.

If ever there was an alliance made irrelevant by circumstances, it is America’s defense guarantee for the Republic of Korea. The two nations share some values—at least since Seoul finally moved to democracy, despite Washington’s long-running support for South Korean dictators. But extensive cultural, economic, and family ties will endure irrespective of the security relationship.

The U.S. was drawn into war in Korea not because of the peninsula’s intrinsic strategic importance—before the conflict even Gen. Douglas MacArthur dismissed the land’s geopolitical relevance. Rather, Washington bore some responsibility for the war, having divided the peninsula with the Soviets and refused to arm the fledgling state. As for security, U.S. policymakers mistakenly saw the North Korean attack as a calculated move by Joseph Stalin, perhaps a prelude to an attack on Europe.

Then American troops were required on the peninsula until the South gained both political stability and economic development. However, by the 1980s the ROK had raced well ahead of North Korea economically. By the 1990s, Seoul had embraced democracy and the North’s Cold War allies had also been transformed; there was no prospect of Russian or Chinese aid for renewed North Korean aggression. Today South Korea enjoys a 40:1 economic lead, 2:1 population edge, vast technological superiority and overwhelming diplomatic support.

The ROK’s reliance on American defense subsidies is a little like Washington begging Europe for support against Mexico. The South can defend itself. Some Americans imagine Seoul joining a grand alliance to contain China, but South Koreans would have to be mad to make the great power next door a permanent enemy by taking Washington’s side in disagreements with little relevance to the ROK (Taiwan, Spratly Islands, Senkaku Islands). Other forms of cooperation, such as intelligence sharing, might be beneficial, but could be conducted without a “Mutual Defense Treaty,” which is mutual in name only.

The Bush administration’s invasion of Iraq was based on a number of illusions, starting with the presence of weapons of mass destruction. U.S. officials also believed as a matter of faith that the Iraqis would create a liberal, nonsectarian democracy, recognize Israel, offer America bases for use against Shia Iran, and join America in the grand march toward a socially progressive future. Alas, it was all an extended nightmare—a series of bizarre fantasies which cost 4,500 Americans and upwards of 200,000 Iraqis their lives.

A classic form of blowback was the rise of the Islamic State. In disposing of the secular dictator Saddam Hussein, the U.S. triggered a bitter sectarian war. The majority Shia finally gained political dominance, but their brutality encouraged dispossessed Sunnis to turn to the Islamic State for protection. Now Washington is back at war on behalf of a nominal ally, which brought distress upon itself and many others.

There’s not much chance that the two countries will share values. Iraq lacks democratic traditions, civic institutions, and tolerant philosophies. That doesn’t mean no one there is interested in building a more liberal society. But public attitudes in America and Iraq remain very different and aren’t likely to converge any time soon.

Nor is there much strategic agreement. Baghdad’s relations with Iran will always be one of the heart. Those with America will always be one of convenience. The Shia authorities overreached and are in danger of losing their country. Call in the Americans! Yet the force threatening Iraq, the Islamic State, poses no particular danger to America. And joining with Baghdad has entangled the U.S. in a sectarian war on behalf of radical Shiites, some of whom continue to kill Iraqi Sunnis.

Better to make the relationship purely transactional. Should the U.S. provide weapons or training to the Iraqi military? It depends on whether doing so makes sense at a particular time and in a particular circumstance. Cooperate when advantageous to do so, but maintain distance otherwise. There should be no pretense of a sustained allied relationship.

Estonia, Latvia, and Lithuania live in a bad neighborhood. Long part of the Russian Empire, and later swallowed by the Soviet Union after a short stint of independence, they now living fearfully in Moscow’s shadow. Today the three are demanding the presence of NATO troops, meaning American forces, and constant “reassurance” that Washington is prepared to go to war for them.

The expansion of the NATO alliance to the Baltics is a good example of how Washington forgot what alliances are supposed to be. Most countries choose allies in order to strengthen their own security. In the aftermath of World War II, the U.S. feared Soviet domination of Eurasia and created NATO as a shield behind which Western Europe could revive.

The policy worked—perhaps too well, as the alliance’s European members chose to take a cheap ride on America even after they had recovered and jumped ahead economically. With the end of the Cold War there was no reason to expand an alliance that had lost its raison d’etre. Whatever security issues remained could have been handled by the Europeans, whether through a continental alliance as a successor to NATO or a European-led NATO. Bringing in the Baltics provided a dramatic example of adding countries which were security black holes— weak states with minimal military capability but potential conflicts with Russia.

Today only Estonia meets NATO’s recommended two percent of GDP, itself a paltry level for a country screaming about the possibility of an invasion by the big bully next door. Latvia and Lithuania spend half that, but promise to eventually get up to two percent. Never mind, say the Baltics:  America, if you please—despite being very busy around the world—put troops along their border and protect them.

It’s probably not realistic to kick the Baltic States out of NATO, but then, the real problem for America is NATO, not particular members of it. Washington should drop out of the alliance, forging a set of more limited military cooperation agreements with the European Union and the European nations with the most potent militaries and significant bases. Needless to say, Estonia, Latvia, and Lithuania would not be on that list.

America has long had a tortured relationship with this semi-failed Pacific state. The United States first grabbed it as part of William McKinley’s imperialistic expansion toward China—the Pacific Ocean made it contiguous claimed the bombastic Sen. Albert Beveridge, the political tribune of imperialism. America had to suppress a vigorous independence movement that had been active against colonial Spain. Some 200,000 Filipinos died as part of this early example of “democracy” promotion.

Eventually granted independence, the nation was overrun by Japan during World War II. Since being freed the Philippines has politically sputtered through dictatorship, corrupt and incompetent democracy, and various other odd mixtures, such as the military elevating a vice president over a president. Long-running insurgencies by radical Islamic groups have undermined what little stability the country offered.