At the Brussels Summit, NATO Faces a Crucial Test 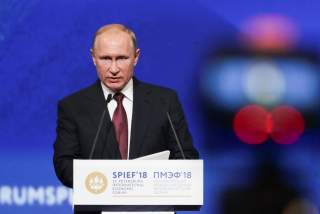 The July 2018 North Atlantic Treaty Organization (NATO) summit will test whether the trans-Atlantic alliance can produce a unified, sustainable position on Russia which, if embraced by United States President Donald Trump, would act as the defining prequel for his proposed bilateral sit-down with Russian President Vladimir Putin in Vienna. The NATO meeting in Belgium, however, is likely to accentuate growing divergence among the allies as to their assessment of the threat Russia poses to the Euro-Atlantic community. The G-7 summit in Canada was a useful trial run—in which significant differences over Russia were patched over in the search for a vague consensus statement.

I am increasingly worried that the standard effort to bury significant policy differences by finding flexible language whose meaning is in the eye of the beholder is becoming counterproductive. It may serve in the short-term to keep the appearance of solidarity but, in the long-term, it contributes to policy incoherence. This is based on conversations and meetings I had the good fortune to take part in during recent days—the Loisach Group in Berlin (the dialogue cosponsored by The Munich Security Conference and the Marshall Center) and the Sustained Dialogue Institute's meetings in Washington. These meetings aimed to explore whether a long-term, bipartisan approach to Russia policy is possible.

Instead of burying policy differences, NATO needs a frank discussion among the allies about Russia. This need not take place in the klieg lights of public fora—but it must address the growing divergences in threat perception and find ways to solidify what is now an increasingly shaky unified trans-Atlantic approach to the Kremlin.

First and foremost, NATO members must recognize that different countries in the alliance assign different priorities to the Russian question. For the Baltic States, Poland and Romania, Russia is an immediate national security threat and is the number one foreign-policy challenge—albeit in a very narrow geographic frame of reference. For a country like Estonia, the risk of a clash with Russia over the Narva region, for instance, drives its search for reliable, unimpeachable security guarantees from its NATO partners. What Moscow does, however, concerning Syria, or Iran, or North Korea, is far less relevant, and only matters to the extent it impinges on the immediate Russian threat in northern-eastern Europe.

For countries like Norway or the United Kingdom, Russia is a security threat but a significant economic partner, which creates divergences in their responses to the Kremlin. Special service operations on UK territory or Russian deployments in the Arctic cause discomfort in London and Oslo, but British and Norwegian financial and business relationships with Russia create imperatives for maintaining positive ties.

For southern Europe, Russia is distant and poses no threat while the opportunities for cooperation abound—especially in the trade and energy fields. This is also true of the remarkable transformation in Russia-Turkey ties, where Ankara has gone from being the southern redoubt of the Atlantic alliance vis-à-vis Russia to a de facto strategic partner with Putin forged by Turkish President Recep Tayyip Erdoğan.

For France and Germany, Russia poses no direct security threat to their countries' territorial integrity or security but both Paris and Berlin are worried about the negative impact of Russian policies on the European order they prefer. At the same time, both see massive advantages to their national interests and to Europe's as a whole for a productive relationship with Russia.

Finally, for the United States, Russia emerges as a factor in many regional and functional issues—the Middle East, Europe, and East Asia, as well as energy-policy, questions about cyber warfare, and maintaining nuclear strategic stability. But Russia as Russia is not a central organizing principle for U.S. foreign-policy, and much of the attention given to Russia tends to be episodic, rather than a core security concern. For instance, America might focus on the question of Russian interference in the 2016 elections rather than constantly worry about Russia as does Poland or Romania.

One failed approach is to make the case, on the basis of Euro-Atlantic solidarity, that the concerns and perspectives of one set of members should become the default position of the alliance as a whole and accepted by all members. No one, however, is willing to cede to Estonia or Portugal the responsibility for defining the joint trans-Atlantic position on Russia. Instead, countries like Germany promote a dual-track approach—embracing both deterrence and engagement. Deterrence is chosen to assuage the concerns of Estonia as to its vulnerability to Russian pressure. This is done by using select sanctions or by contributing to rapid reinforcement initiatives designed to show that NATO can respond quickly and effectively to any conventional Russian incursion. At the same time, Germany also engages in trade and investment deals with Russia. This is done either to nudge Russian international behavior in directions preferred by Germany or by because Berlin simply prioritizes German economic and business interests over every last security concern of other European states. This approach, in turn, comes under fire from the southern Europeans who see sanctions and military deployments further east as unnecessarily provocative while also being criticized by Baltic states and Romanians as appeasement which strengthens Russia's position.

Furthermore, the United States has, despite Trump's preferences, been leaning towards a more confrontational approach that tries to isolate Russia and put pressure on the Kremlin. The matter is complicated because the United States is not willing to trade cooperation on Russia for consideration on other issues of concern to other European allies. It would have been challenging to convince Germany to abandon the Nordstream-2 pipeline project or for France to get its energy companies to pull out of key Russian projects—certainly President Barack Obama had no such luck! But the chance that countries like France and Germany will be more willing to part company with Washington over Russia policy has increased with recent American decisions. These have included Trump's imposition of tariffs on European allies who are now deemed to be national economic security risks and the withdrawal of the U.S. from the Iran nuclear deal. Moreover, America's withdrawal from the agreement threatens that U.S. secondary sanctions will be imposed on European companies doing business with Tehran.

The risk is that a contentious NATO summit gives the appearance of major fractures in Euro-Atlantic solidarity right before Trump sits down with Putin in Vienna. It may also shape the tenor of French President Emmanuel Macron's "historic dialogue" with Russia in a way that suggests that daylight is opening up in the positions of NATO allies vis-à-vis Russia. Such an outcome would not serve Western security interests.