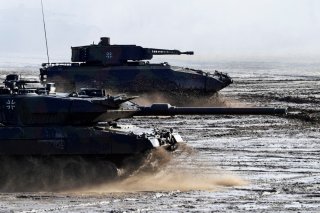 Given its tremendous economic and political clout, Germany’s risk-averse, buck-passing foreign policy makes it an easy target for criticism from Americans frustrated that Europe’s economic powerhouse has one of the most underfunded armed forces in the Western world. As the ongoing crisis in eastern Europe is demonstrating again, German elites have a decidedly less hawkish view of Russia and have been noticeably uncomfortable with the proposals put forward to punish Moscow for an invasion of Ukraine.

However, as the limits of hegemonic overstretch and the diminishing importance of the European theater to U.S. foreign policy become glaringly apparent, the United States has a strong interest in incentivizing Germany to play a much larger role in shaping and supporting Europe’s security order. In lieu of U.S. military primacy, the goal of an alternative burden-shifting strategy should be to encourage and promote a Franco-German balancing coalition capable of policing the European neighborhood and deterring conflict with Russia without the help of the United States.

Burden Shifting Is a U.S. Interest

Given the current threat environment, there are four prudent reasons why U.S. policymakers should be looking to shift most of the responsibilities and costs for regional security to their European partners. First, as three consecutive administrations have made clear, addressing China’s rise is the foremost strategic priority for the United States. Sustaining a massive forward military presence made up largely of land forces consumes scarce budget resources that could be invested in naval and air assets needed for operations in island-laden East Asia.

Second, allowing European treaty allies to continually underinvest in their armed forces makes it more likely that U.S. forces will have to make up the difference during a crisis. While it is unlikely that Germany will face an existential threat to its national survival anytime soon, the low probability of a high-intensity crisis emerging does not justify failing to take the necessary steps to prepare for it. Continuing to pick up the German defense bill only incentivizes this irresponsible behavior and leaves the United States on the hook to respond to these contingencies.

Third, alienating Russia through NATO expansion and the creeping presence of U.S. military assets, such as air missile defense systems and rotational troop detachments, only pushes Moscow and Beijing closer together. Neglecting to improve relations with Russia also makes it more difficult to cooperate on issues of mutual concern, such as arms control and emerging technologies, and set red lines for responsible geopolitical competition to avoid needless confrontations.

Finally, and relatedly, a narrower conception of U.S. security interests in Europe would give regional powers more space to pursue diplomatic engagement with Russia. This would help de-escalate threat perceptions between the West and Russia and assist both sides in reaching a modus vivendi that respects each other’s vital national interests. As the diplomatic showdown with Moscow over Ukraine is showing, French and German leaders are much more willing to meet Russia halfway regarding its concerns over NATO activities in the post-Soviet space than Washington is. Given their political, geographical, and economic dispositions, both countries obviously have a much stronger interest in pursuing détente to promote regional stability and avoid conflict. Moreover, unlike the routine threat inflation rhetoric from influential voices in Washington, French and German threat perceptions are more attuned to the limits of Russia’s geopolitical interests.

Ironically, U.S. policymakers are more concerned with the sovereignty of a country where there are no vital American interests at stake than the regional powers who would be most affected. Ukraine may not like the diplomatic prescriptions drawn up by France and Germany, but the current stalemate between Washington and Moscow is making the prospects for a peaceful resolution increasingly unlikely. Instead, in an environment where major European powers have a greater say in what goes on in their neighborhood, crises like the one over Ukraine would be less likely to erupt and more likely to be resolved peacefully if they did.

Europe Will Still be Secure Without the United States

Fears that a remilitarized Germany could act on its historical ambitions for regional hegemony are sometimes used as a justification to maintain the status quo. According to this view, American leadership in NATO is a worthwhile investment to, in the famous words of Lord Hastings Ismay, keep “the Germans down.” After the Cold War, U.S. policymakers went further and concerned themselves with erasing Europe’s “dividing lines” to prevent any regional conflict, particularly in the former Warsaw Pact states, from breaking out. As the influential 1995 Study on NATO Enlargement concluded, “there can be no question of ‘spheres of influence’ in the contemporary Europe” (emphasis added). A slew of comments by Secretary of State Antony Blinken and NATO secretary-general Jens Stoltenberg over the last two months in reference to the ongoing Russia-Ukraine crisis have similarly derided the pre-1945 balance of power arrangement as illegitimate, unstable, and obsolete.

In the age of nuclear deterrence, these anxieties are misguided. The British and French strategic nuclear arsenals are capable and credible enough to deter great power aggressors. Absent an American forward commitment, or even a nuclear umbrella, they would still be effective at dissuading potential adversaries from threatening their territorial integrity or that of their treaty ally neighbors. Hypothetically, regardless of whether it acquired nuclear weapons, a revanchist Germany that shed its postwar pacifism and set itself on upending the European security order would still be deterred from pursuing regional hegemony thanks to the French nuclear deterrent.

France and Germany Should Lead

Consistent with their histories, geographies, and the material foundations for geopolitical power, the two most important actors in the European security environment are France and Germany. The former’s traditional ambitions for greater strategic autonomy, or independent and self-sufficient military capabilities, need no encouragement. France, as a RAND policy report explained, “is keen on being able to play the role of a “framework” nation in a coalition operation” while ensuring “that it never completely depends on someone else’s forces to respond to a given contingency.” Moreover, as presidents Francois Hollande and Emmanuel Macron have affirmed repeatedly over the past decade, “the authentically European dimension” of France’s air and sea nuclear capabilities means that the continent has a reliable indigenous strategic deterrent.

However, Berlin's shrewd doctrine of passing on the costs of its national defense to the United States means that a strategically autonomous Franco-German balancing coalition has little chance of ever being realized at the European Union level. This has been a disappointment for Macron who, since his election in 2017, has consistently pushed for more autonomous pan-European defense capabilities. Yet, German political leaders have no reason to promote an arrangement that would upset their relations with Washington, nor would they want to voluntarily increase defense expenditures for purposes duplicative of preexisting NATO functions. Consequently, this means that NATO is the only security forum through which Germany could face serious pressure to change its behavior.

Push Germany to Do More

The United States should encourage Germany to become a stronger military power and another “framework nation” in the European security order. This will require making long-overdue changes that explicitly signal that the days of passing on the costs of national defense to American taxpayers are over. As Defense Priorities’ fellow Richard Hanania explained last year, “American leaders must see the U.S. presence abroad as a cost, not a benefit” to exert leverage over treaty partners and change their behavior.

A good start would be to withdraw the more than 30,000 U.S. troops permanently stationed in Germany and either close or hand over the bases to Berlin. In addition to consuming resources that could be better invested in naval and air assets, the presence of these land forces does not necessarily tie Berlin closer to Washington. Indeed, many American foreign policy elites are frustrated that the German government has not embraced the same confrontational stance towards Russia and instead pushed back against the Biden administration’s demand to implement harsh sanctions on Moscow if Ukraine is invaded.

This does not mean that the United States must leave NATO, although that might eventually be an option worth considering if Europeans become more strategically autonomous. However, it does mean that a more equal division of labor and within the alliance is necessary if it is going to have any political-military utility when it comes to defending its members from external threats. Indeed, once American forces have left, anxious NATO members in eastern Europe will be relying on neighbors with a greater interest in promoting and investing in the region’s collective security, including by engaging Russia through reciprocal diplomacy.

Encouraging the development of a Franco-German balancing coalition will, in the long-term, weaken Washington’s ability to influence Paris and Berlin as their foreign policies become more independent and assertive. Yet, given that the European theater is strategically subordinate to East Asia, this is a trade-off well worth making. The benefits associated with encouraging the development of a militarily stronger Germany through burden-sharing vastly outweigh the status quo alternative.