Caliphate: The History of an Idea 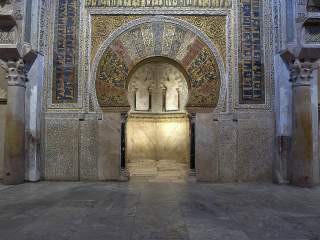 Editor’s Note: The following was excerpted from Caliphate: The History of an Idea by Hugh Kennedy. Copyright © 2016. Available from Basic Books, an imprint of Perseus Books, a division of PBG Publishing, LLC, a subsidiary of Hachette Book Group, Inc.

Many of Ali’s supporters were dismayed by what had happened, seeing their leader as a victim of a Syrian trick or, even worse, as having agreed to put his God-given authority to the judgement of two men. When he returned to Iraq, his uneasy coalition began to break up. Some of the tribal nobles began to enter into negotiations with the Syrian leader. Much more threatening than that, at the other end of the political spectrum, many of his more radical supporters abandoned him and went out to camp in a separate place, announcing that arbitration belonged only to God and implying that the issue should have been decided on the battlefield.

These dissenters became known as Kharijites (Ar. khawarij). They have survived as a sect down to the present day, notably in Oman and parts of southern Algeria. How the name originates is quite unclear. The word khariji means literally one who goes out, but the often quoted explanation that they went out from Ali’s camp seems feeble. More attractive is the historian Andrew Marsham’s suggestion that it related to the verses in the Qur’an which urge Muslims to “go out” (on the jihad) rather than stay at home. Kharijites were associating with the militant activists among the earliest Muslims. They have never constituted more than a small percentage of the Muslim population. but they are important in the history of the caliphate because they developed theories of the office, how the caliph or imam (they used both terms to describe their leaders) should be chosen and what they should do, which were radically different from the concepts of both Sunni and Shiʿi.

The Kharijites split from the emerging consensus over two main issues. The first was that they believed the caliph should be chosen from all the Muslims as the most pious and meritorious of them. Quraysh descent was absolutely not required and any Muslim, no matter how humble his social origins, could be considered for office. Some said that even a slave could be chosen, and it is alleged that a few even argued that women were eligible, though this point of view never seems to have been widely accepted. They generally agreed that Abu Bakr and Umar were lawful caliphs, but only because they were the best men of their time, not because of any Qurashi descent, and they completely rejected Uthman and all subsequent claimants. When others had their doubts, the Kharijites were proudly unrepentant of the role some of them played in the murder of Uthman, seeing it as entirely justified, even necessary, because of his deviation from proper Islamic behaviour. Quite how the choosing of the new leader was going to take place was not really specified: certainly there was no discussion of the practicalities of either election or shura. It was sort of taken for granted that the most meritorious would emerge and be accepted by the community. If the caliph they chose went astray or proved to be corrupt and tyrannical then he should be corrected, first by being warned that his conduct was unacceptable and, if this failed, by being deposed or killed. Patricia Crone shows how this could be pushed to its logical conclusion and beyond:

When Nadja b. Amir, founder of the Najdiya group of Kharijites, did various things of which his followers disapproved they demanded that he repent, which he did. But then a group of them regretted having asked him to repent and told him: “We were wrong to ask you to repent for you are an imam. We have repented of it so now you should repent of your repentance and demand that those who asked you to repent should repent of having done so. If you don’t, we will separate from you.” So he went out and announced to the people that he repented of his repentance. His followers then began to quarrel among themselves.

So there you have it: the caliph/imam being held to account in a lively exchange of views but nonetheless respected for his position. In one sense it was a conditional and contractual vision of monarchy, rare in Islamic political thought, though the rules and mechanisms by which conditionality might be put into practice are left unclear and the issue was not whether the caliph/imam did what was beneficial for the com- munity but whether he was acting in agreement with God’s law.

According to the Kharijites, the caliph/imam had the authority to decide matters of law and religious practice, but he should do so in consultation with the scholars in the community and it was the community which could judge whether he had acted in accordance with God’s law. The caliph, in fact, was to lead by consent to command and he had no God-given authority.

The other main idea in Kharijite ideology was that those who sinned grievously should no longer be considered as Muslims, no matter what they said, but were rather heathens, kuffar (sing. kafir). All true believers should hunt these kuffar down and kill them, and sell their women and children into slavery. Among the sins which could mean that you were treated as a kafir was, of course, refusal to accept the authority of the Kharijite community and its views of the caliphate. This ideology of takfir, considering those you disagreed with to be non-Muslim, even if they claimed to be good Muslims, seems to have originated with the Kharijites at this time, but has been adopted by other groups right down to the present and is the basis of the attitude of Islamic State towards Muslims who disagree with them.

Kharijite views were no mere debating point: these people meant action. Their defection from Ali’s camp led to a collapse of his military effort against Muʿawiya and it was a Kharijite who assassinated Ali in 661 (they had intended to assassinate Muʿawiya too, for they hated both of them equally, but the attempt failed).

The Kharijite movement also had a strong social basis to it, although this was never spelt out in their ideology. It gained its recruits among those who rejected not just the caliphates of Uthman and Ali but the whole norms and behaviour of settled life which most Muslims had adopted after the great conquests and the migrations which followed. Many of their followers left the newly established garrison cities and led a wandering life, half nomads, half brigands, in the deserts of Arabia and southern Iran. To some they were romantic figures, harking back to the days of freedom when there were no taxes and no law-enforcement agencies, and their poetry, of which a great deal survives, was full of the spirit of the Jahiliyya, or pre-Islamic times, glorifying the Bedouin warrior and the life of travel and camp, raid and battle, albeit within a Muslim framework.

The movement divided into a number of groups. Two of these, known after their first leaders as the Azariqa and Najdiya, abandoned the urban life entirely and went out to terrorize their opponents and to raid settled communities. Unsurprisingly they came into conflict with the Umayyad authorities and both of them were violently suppressed, the Najdiya in Arabia in 693 and the Azariqa in Iran in 699. The Ibadiya, by contrast, developed a position that enabled them to live together with their non-Kharijite neighbours and accept a secular authority while waiting and hoping for the arrival of a truly Kharijite imam. This quietist attitude enabled them to survive in parts of Algeria and Oman right down to the present day.

The assassination of Ali in 661, followed as it was by the assumption of power of Mu‘awiya, the first Umayyad caliph, marked the end of an era marked by violence and division; but the thirty years since the death of the Prophet Muhammad had also been a period of astonishing achievements. Arab Muslims had conquered almost all of what we might describe as the central Middle East, from the eastern borders of Iran to southern Tunisia. The governments of the caliphs had also set up systems which ensured that Arab-Muslim government lasted after the initial conquests were over. The caliphs and the idea of caliphate played a key role in this achievement. The nature of the office was still undefined and the method of choosing the leader hardly explored. But this uncertainty encouraged flexibility.

Many different groups had their own ideas about who the caliph should be and what he could do, but no one, apart possibly from some small groups of Kharijites, argued that the caliphate was unnecessary and could be abolished. The concept offered the opportunity for diverse groups to develop it as they saw fit, but fundamentally presented an ideal of rulership which combined political and military leadership with spiritual guidance. It could also offer a leadership which was responsive to the needs of Muslims but was also, and crucially, respectful of what were seen to be God’s decrees. The history of the caliphate of the Orthodox period raised almost all the main issues about powers and personalities which have dominated the discussions of the nature and potential of the office ever since.