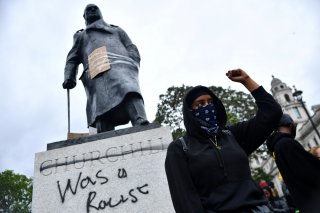 Wasn’t it enough for Winston Churchill to sound the alarm against Adolf Hitler in the 1930s, lead the war, singlehandedly, against him for two years and help prevent an even greater genocide? Apparently not. In the latest spasm of political correctness, Churchill’s statue, originally erected in 1974, was defaced in Westminster with the observation “was a racist.” Prime Minister Boris Johnson, who has also been deemed a racist, declared, “These demonstrations have been subverted by thuggery - and they are a betrayal of the cause they purport to serve. Those responsible will be held to account.” The brouhaha centers on Churchill’s belief in the inate superiority of Anglo-Saxon civilization, which he never concealed. Instead, he trumpeted it. Loudly and proudly.

There can be no doubting that Churchill held views that are viewed as retrograde today. Churchill made nasty remarks about Indians and other peoples. He also endorsed some very rough measures, including recruiting and sending the Black and Tans goons into Ireland, an episode that has not been forgotten to this day. But Churchill was hardly unique in his attitudes. He was a late Victorian with all that implied. By the same token—and here he was rather unusual for his time—he was something of a philo-Semite. He was passionately dedicated to Israel and the Jews in contrast to Franklin Roosevelt. Writing in the Independent, Sean O’Grady notes, “No figure with as long and momentous a career as Churchill could be flawless. He was famously inconsistent on his politics, switching party and policy to suit himself – probably the only thing he truly has in common with his successor and biographer, Boris Johnson. He was a racist, but also anti-fascist; he was fiercely anti-communist, yet carved Europe up and gifted much of it to Joseph Stalin.”

The truth is that attacking Churchill is a proxy for a wider denunciation of the British empire itself. To its detractors, Rule Britannia was simply cruel Britannia, leaving a dismal reign of terror in its wake. To its admirers, the British empire left a glowing legacy—the rule of law in India, among other things. The nineteenth-century historian Thomas Macaulay, who served on the Supreme Council of India in the 1830s, is venerated to this day by some Dalit activists as a liberator from caste tyranny. In his very informative book, Macaulay: Pioneer of India’s Modernization, Zareer Masani observes, “Whatever one thinks of Maculay’s personal prejudices, and he had many, his institutional legacies, I would argue, are the glue that still holds independent India together as a multi-lingual, democratic, federal state with English as its lingua franca.”

None of this, of course, will persuade or propitiate those zealots intent on defacing statues of the Victorian greats, or even hurling their predecessors into harbors, as occurred in Bristol. In Oxford, a banner was recently unfurled that said, “Rhodes, you’re next.” London Mayor Sadiq Khan, who has been the target of some of Donald Trump’s more vitriolic tweets, is announcing the establishment of the Orwellian-sounding Commission for Diversity in the Public Realm. According to Khan, Churchill will get a pass: “Nobody’s perfect, whether it’s Churchill, whether it’s Gandhi, whether it’s Malcolm X,” he said on the BBC.

What a concession! “Nobody’s perfect” hardly captures the greatness of the man. For my part, I stick with the political philosopher Leo Strauss’ verdict upon learning of Churchill’s death in 1965: “The tyrant stood at the pinnacle of his power. The contrast between the indomitable and magnanimous statesman and the insane tyrant – this spectacle in its clear simplicity was one of the greatest lessons which men can learn, at any time.”

If the British don’t want Mr. C anymore, then perhaps his reputation will remain undiminished in America, where a veritable Churchill cult is thriving. Trump tried to imitate Churchill during the Blitz, we were told, when he strolled over to Lafayette Park last week after demonstrators were cleared out at his behest, but that stunt flopped. He should have known better. You can’t compete with Churchill. You can only venerate him.