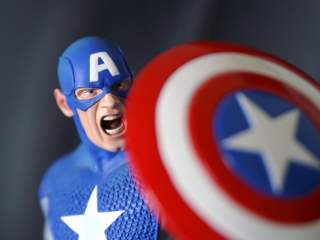 Next summer’s superhero blockbuster, judging by the jaunty movie trailer recently released, promises to pit the the U.S. supersoldier Captain America against the super-suit clad Iron Man. When these preternaturally strong and speedy heroes first debuted in comics in 1941 and 1963, respectively, it was the cutting edge of science fiction. Since then it has become the the stuff of science reality as the U.S. military works to equip soldiers with bionic arms and "Iron Man" exoskeletons.

At the same time, the advent of 3-D printer technology promises custom products on demand. But what is really mind-bending are new 3-D bioprinters, that produce human cells on demand, and thus can churn out replacement organs like lungs and hearts.

Which leads to the next logical question: Can we use 3-D bioprinters to create supersoldiers?

Theresa Campobosso, a former Marine Corps intelligence officer, explores this prospect in an article in Small Wars Journal. Campobosso suggests that bioprinters can create enhanced body parts for warriors, with the most likely enhancements being those that resemble existing body parts (no grafting fins or a barbed tail onto a Marine).

For example, bioprinted muscle tissue added to existing muscles in the human body would increase strength and endurance. Bioprinted ears can replace failing ones on aging as well as injured soldiers. As for the human heart, "a medical professional could create a digital scan of a soldier’s heart, increase the scale of the model, and enable the soldier to benefit from the more powerful organ without having to alter the design," Campobosso writes.

Campobosso also outlines a system for incorporating bioprinted body parts into the military. The process would begin with basic training, when soldiers would provide cell samples that would be scanned and then stored as digital blueprints. During a soldier's career, biological enhancements could be printed at any time from those blueprints. And maintenance would be a snap: "If at any time the enhancement becomes damaged, a new one is created locally from the saved digital blueprint which is transmitted to a printer nearest to the soldier’s location," says Campobosso.

She correctly points out that the biggest advantage of bioprinted body parts, which is that they improve the most important variable in warfare, namely the soldier. While DARPA is pouring money into "human performance enhancement" like exoskeletons, these can break down and they require a power source, while pepping up soldiers with stimulants can have dangerous side effects.

To quote Khan, the genetically enhanced Star Trek super-villain, "Improve a mechanical device and you may double productivity. But improve man and you gain a thousand fold."

But before we create our own Captain Americas, it is worth noting a few concerns about the ideas forwarded in Campbosso's essay. She notes that hackers could steal genetic blueprints. What could, say, Chinese hackers do with a genetic roadmap of American soldiers? Tailored biological weapons?

She also notes that at the end of their career, "enhanced soldiers leaving the military service are offered transition support as they return to civilian life." In other words, what happens to the Special Forces sergeant tricked out with extra muscle and a bigger heart once he leaves the service and enters the world of mortal men? Would he be barred from becoming a professional athlete because of his "unfair" advantages? Would he feel like a freak in normal society? What would an angry superman do to society, and what would society be forced to do to him?

Most troubling is this passage:

"Some ethics researchers expressed hesitation when considering an enhanced or augmented military with soldiers whose capabilities far exceeded the human baseline, and posed the question of whether an enhanced soldier would count as a weapon under the Geneva Conventions."

In others words, a fundamental question: Is a bio-enhanced human soldier still human?