Can Abe Win the Confidence of Japan's Restless Voters? 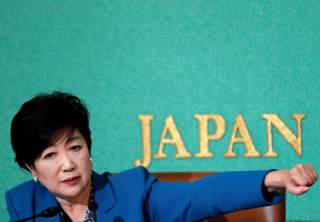 Japan is going to the polls to elect a new lower house of its parliament, called the Diet, on October 22. For many Japanese this is an important election, considering the security threat from North Korea, the often prickly nature of relations with China, and dealing with the somewhat unpredictable Trump administration in the United States. Equally important, the economy has made progress, but it still needs further restructuring. This is important as Japan is key base for U.S. armed forces astride of the Asian mainland and remains the world’s third-largest economy. If Japan’s real GDP growth were to accelerate it could have a positive impact on the global economy. If there is a war with North Korea, Japan would be an important part of the action. Although usually sunk in any news headlines, Japan remains an important force in both geopolitical and geo-economic realms.

Japanese voters are caught between the desire to have a steady hand at a time of substantial change internationally and the desire to try something different from the long reign of the LDP government. Liberal Democratic Party (LDP) head Shinzo Abe has been in office since 2012 and has provided firm leadership, following three different prime ministers under the opposition Democratic Party in the 2009–12 period. Indeed, Abe’s tenure in office is noteworthy for an office that has in the past seen a rapid rotation of leadership. In the 2006–12 period alone Japan had seven different prime ministers, including a short stint by Abe.

When Abe called an early election in late September, the opinion polls indicated that the LDP and longtime coalition ally, Komeito, would sail to an easy victory on October 22. After all, unemployment has fallen to its lowest rate in twenty-three years and wages are rising (at least for minimum wage earners). Even prices are also crawling upwards (though still below the Bank of Japan’s 2.0 percent target). Real GDP growth is expected to be 1.6 percent for 2017, which would be an improvement over 2016’s 1.0 percent expansion.

The turnaround in opinion polls was significant in Abe’s decision to call elections a year ahead of when they were scheduled to be held. The prime minister’s standing had earlier slumped due to two corruption scandals, which implicated both his wife and several LDP members of the Diet. The first scandal involved a cut-price land deal between the finance ministry and a nationalist school group known as Moritomo Gakuen. The second scandal was related to the approval of a veterinary department of a private university headed by the prime minister’s friend, Kotaro Kake.

The matter was not helped when leaked education ministry documents alluded to the involvement of “a top level official of the prime minister’s office.” Although Abe repeatedly denied personal involvement, potential voters doubted his word and his standing suffered. However, Abe conducted a cabinet reshuffle and indicated his contrition in the affair, which helped him regain ground in opinion polls. Moreover, there was no direct evidence linking the prime minister to the scandals. By mid-September, Abe felt confident to call for an early election (one year ahead of schedule).

Although the election was said to be called for economic reasons (a planned hike in the consumption tax is a key issue), the more important matter is that Abe wants to reform the country’s constitution, in particular, to loosen its antiwar language. The Japanese leader believes that for his country to deal with its security risks—a rising and more aggressive China, an uptick in the testing of Japanese air defense capabilities by Russia and North Korea’s nuclear hawkishness—Japan needs to build up its military and have the option of using it beyond its borders. To do this he needs to amend the constitution. The last election in 2014 did not give the LDP enough seats to make the changes; Abe’s hope is that this round of voting could provide him with the majority required to change the constitution.

A potential spoiler for Abe and his gambit to rewrite the constitution is the popular governor of Tokyo, Yuriko Koike. A protégé of former LDP Prime Minister Junichro Koizumi, she is articulate, photogenic and with good political instincts. She is seeking to pull her Kibo no To (Party of Hope) together with the main opposition party, the Democratic Party and the Japan Innovative Party, headed by Osaka governor Ichiro Matsui. Greater Tokyo houses some thirty-seven million people, making her a formidable player.

Osaka is the second largest population in Japan after Tokyo (the Kobe-Kyoto-Osaka greater metropolitan area is home to 19.3 million people.) Aichi Prefecture governor Hideaki Omura has also thrown in his support for the new political grouping. The capital of Aichi is Nagoya, home to 9.1 million people and the country’s third largest city. The combination of Koike, Matsui and Omura is potentially a significant challenge to the LDP, especially considering that Koike was formerly in the ruling party.

The involvement of the governors and their parties is important considering the weakness of the Democratic Party, which stumbled through three prime ministers from 2009 to 2012 and was unable to turn the economy around. At the same time, the party sought to rebalance Japanese foreign policy, stressing a greater emphasis on Asia, which was soon upended by clashes with China in the Senkaku Islands. In the eyes of many Japanese voters, the Democratic Party had raised expectations for change and failed to deliver. Japanese voters reverted to the boring, yet more predictable LDP, headed by Abe, which won office in 2012 and again in 2014.

Although Kioke is not competing for a seat in the Diet, she is campaigning for change and has become the de facto voice of the opposition. Her party favors greater decentralization of power from the center to the prefectures, with more powers being given to local governors, ending the country’s dependency on nuclear power and economic growth. She also has called for an end of shigarami (entanglements), a dig at Abe over corruption. She is also in a similar camp to Abe on security matters.

The Japanese elections could be influenced by foreign affairs. If North Korea becomes even more bellicose, Abe has demonstrated that he is willing to be tougher while willing to work with the United States. The second part of that is important because Abe has sought to develop a personal relationship with the new American president, whose rhetoric many Japanese find unsettling. If conditions with North Korea were to severely deteriorate, Japan would most likely be a target of the Kim regime’s weapons attacks. For Japanese voters, Abe has foreign-policy experience, a factor that they may weigh heavier into their consideration when voting, especially if North Korea is active in threatening their country.

Abe will probably retain power. However, his ability to change the constitution is likely to fall short. Japanese voters are restless and if Koike can hold together a serious opposition grouping (which in the past has proven to be a difficult exercise), then it could be a much more exciting election than previously thought. Japanese politics, especially for non-LDP parties, have tended to be fickle, usually floundering on personality issues and an inability to maintain unity for the long term. Overall, 2017 could be a pivotal turning point for Japan, but most likely it will offer Abe another four years to continue the restructuring of the country’s economy and keeping external threats at arm’s length.