Can America and India Really Be Strategic Partners? 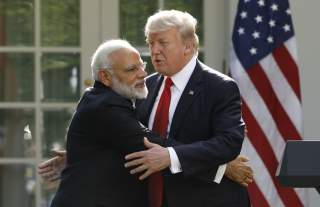 Finally, India seeks improved ties with Russia, and Modi has developed a personal relationship with Vladimir Putin. India does not intend to cease its arms trade relationship with Russia, as it is concluding a $5.5-billion purchase of the Russian S-400 Triumf long-range air-defense system despite U.S. objections. Even though this provoked threats of sanctions, Indian Defence Minister Nirmala Sitharaman maintained that India has “a time-tested relationship” with Russia and further reiterated India’s stance that it only recognizes UN sanctions, not unilateral U.S. sanctions. While the United States is now providing a waiver for CAATSA sanctions to India, this incident shows that the two countries’ interests are not aligned, but workarounds are necessary to make the relationship work.

At present, the tension between New Delhi and Washington over strategic issues is evident. While several disputes are taking place between the United States and its traditional allies due to the nature of the current U.S. administration, the quarrel with India is likely to affect Indian thinking more because of the preexisting distrust and shorter history of close ties with the United States.

The evidence provided in this article does not disregard the fact that U.S.-India cooperation has significantly improved in the past few decades. Rather, it is meant to temper expectations that the partnership will continue to strengthen at accelerating, or even constant, speed. It is important to have a practical understanding of the likely constraints on and bounds of the U.S.-India relationship.

While there will be ups and downs in U.S.-India bilateral ties, a strong strategic partnership seems unlikely, contrary to the expectations of the proponents of the 2005 civil nuclear agreement. Ultimately New Delhi greatly values strategic autonomy, so it will not willingly serve as a catspaw to Washington’s policies towards American rivals like China, Russia, and Iran, or at international fora like the United Nations.

Note: Data updated by author from: Erik Voeten, “Data and Analyses of Voting in the UN General Assembly,” Routledge Handbook of International Organization, edited by Bob Reinalda (published May 27, 2013).

Hamza Shad is a research assistant at the Stimson Center’s South Asia Program, where he focuses on India-Pakistan relations and the U.S. role in the region. He studied economics and political science at the University of Chicago.