Can America Convince China to Subdue a Nuclear North Korea? 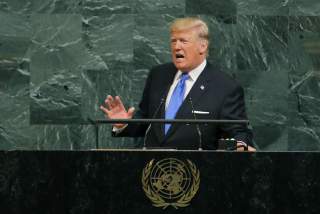 Dealing with China is preferable to dealing with the nuclear threat of North Korea. This conclusion follows quite logically from the following points:

• North Korea poses a serious threat. Michael Morrell, former acting director of the Central Intelligence Agency, stated: “I believe that North Korea may have the capability today to successfully conduct a nuclear attack on the United States.” Japanese prime minister Shinzo Abe penned a recent editorial in the New York Times which states that “the whole world confronts an unprecedented, grave and imminent threat from North Korea.” One should pay no mind to those who “know” its rulers are not suicidal, that the missiles may melt on reentry and so on.  No one can tell. Hence, it is best to hedge for security, to be safe rather than sorry.

• China has the means to stop North Korea by stopping the flow of oil and other vital supplies. Tong Zhao, a fellow at the Carnegie-Tsinghua Center for Global Policy, has pointed out that cutting off North Korea’s oil supply “is one of the most radical measures China could ever take and it could have strategic implications if the regime’s stability is affected. . . . It is not going to be immediate but over time it could have an impact on the regime’s survival.”

• The costs for China doing so are high. Altering the status quo in North Korea carries great risk for President Xi, who is worried about a flood of malnourished North Korean refugees into China, the advance of U.S. troops from the DMZ to the Chinese border, and losing its main ally. Hence, the United States needs to provide China strong incentives to make this move.

How can the salience-based bargaining method be applied to Sino-U.S. relations? First, the United States needs to rank its interests (not necessarily publicly). As I see it, stopping additional development of the North Korean missile and nuclear program—or, better yet, rolling it back—is very high on this list for obvious reasons. The question then is: what interest is salient enough for China to assume the high costs of pressuring North Korea to cap or cut back its program? And can the United States accommodate these interests at a low cost to itself? The best approach is to ask China what it would take to ensure its cooperation. (Its initial response may well be treated as an opening bid in a negotiation, and not the final offer.) However, for the sake of this exercise, let me try to figure out what China might seek and what the United States could quite readily afford to grant.

Second, China might well be very interested in the United States’ committing itself to removing the Terminal High Altitude Area Defense (THAAD) missile defense system, which is currently being installed in South Korea. THAAD, the United States says, is intended to defend South Korea against North Korean missiles, and is not aimed at China. The system “does not change the strategic balance between the United States and China,” President Obama said after meeting with Xi Jinping in Hangzhou. But China was not persuaded. Chinese officials have argued that the THAAD radar can detect Chinese missiles on the mainland and undermine its nuclear deterrent. Once North Korea’s nuclear missile program is no longer an acute threat, the United States should be quite willing not to place THAAD in South Korea. Other measures may need to be added—once we find out what China is keen to gain and we can quite readily afford to give.

• Sanctions often do not work but even when they do, they are much too slow for the current threat.

• Preemptive strikes on North Korea are, widely agreed, a bad option because Seoul is likely to be devastated in response. Hence it should be considered only as a last resort. It follows: the better option is to explore whether the United States can find way to incentivize China to act, rather than try to shame or sanction it.

Amitai Etzioni is a professor of international relations at The George Washington University. He served as senior advisor to the Carter White House. For additional details, see Amitai Etzioni’s Avoiding War with China.