Can America "Just Say No" to China? 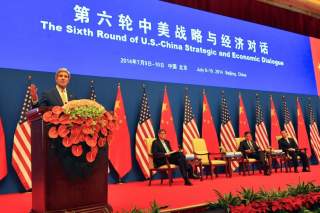 “One of America’s clearest and most compelling interests is to develop a positive and constructive U.S.-China relationship.”

Secretary Kerry’s statement at the recent U.S.-China Strategic and Economic Dialogue (S&ED) is consistent with President Obama’s priority for the United States to make a military, diplomatic, and economic rebalance to Asia. And while the President and his administration have taken great strides to improve ties with regional partners Japan and Korea and serve as an arbiter of maritime and territorial disputes, the U.S.-China relationship has emerged as the United States’ highest priority. President Obama said in March 2014 “that this bilateral relationship has been as important as any bilateral relationship in the world,” aspiring to realize Chinese President Xi Jinping’s proposition of a new type of major power relations.

China has taken advantage of this dynamic: undermining U.S. credibility in the region with allies and partners, successfully advocating for imbalanced cooperation efforts, and derailing progress on more substantive issues by putting the United States on the defensive in order to prove its priorities in the region.

The United States has overemphasized the engagement aspect of the U.S.-China relationship and has disregarded what Kerry referred to as the “constructive” part of the picture. Absent reciprocation or behavior modification from China, however, a true major power relationship is an unattainable goal.

As it reassesses its priorities for the bilateral security relationship, the United States should also ensure its messaging to China is consistent and resilient. The United States should be selective on issues of engagement: prioritizing substantive, productive issues such as cybersecurity and eschewing counterproductive, incongruent agendas such as counterterrorism cooperation. The United States cannot forgo consideration of larger strategic interests (such as protecting intelligence and military capabilities) or avoid contentious but important issues (such as tensions in maritime Asia, avoiding conflict escalation) so that it may engage with China. It runs the risk of cooperating for cooperation’s sake.

Too often, administration officials and military officials send messages that contradict each other and weaken U.S. strategic positioning—even individuals within the same organization or military service send divergent messages. Inconsistent U.S. messaging weakens leverage in negotiations and cooperation with China, and needs to be streamlined and better coordinated. The United States cannot continue to convey an impression that there is no unified stance on important strategic issues such as China’s maritime activity in the South and East China Seas and further offshore, allowing China to exploit the contradictions to its advantage.

For example, in his recent interaction with Admiral Wu Shengli of the People’s Liberation Army Navy (PLAN), U.S. Chief of Naval Operations Admiral Greenert chose not to raise the issue of Chinese activities in disputed waters because he “didn’t want to get bogged down in a bunch of platitudes or for-the-record statements,” arguing that his priority lay with building trust. Meanwhile Secretary of Defense Chuck Hagel in June had no qualms calling China’s actions in the South China Sea “destabilizing” and “unilateral” and that the United States “firmly oppose[s] any nation’s use of intimidation, coercion, or the threat of force to assert those claims.”

To cite another example, when China participated for the first time in the Rim of the Pacific (RIMPAC) naval exercises this year, the PLAN also sent an uninvited maritime surveillance ship to monitor activities. U.S. Pacific Fleet Commander Admiral Harry Harris “doesn’t know why” PLAN sent a spy ship even though they were invited. “Here is the Chinese conundrum,” he said. Admiral Samuel Locklear, Commander of U.S. Pacific Command, noted that the ship’s presence at RIMPAC was “good news” of China’s “recognition” or “acceptance” that “military operations and survey operations in another country’s [maritime zones] are within international law and are acceptable.”

Even if China is to be commended for respecting the legal boundaries of operating in EEZs and other nations’ territorial waters, China fails to reciprocate this in waters closer to its own territory and EEZ. To this end, Admiral Harris contends that “China is responsible, in my opinion, for increasing tensions in the South China Sea. They are provocative in some of their actions…[and] it concerns me.” Admiral Locklear, on the other hand, said, “China is entitled to expand peacefully” and he continues to have “a very productive dialogue with our Chinese counterparts.” Without clear and consistent messaging, it will be more difficult for U.S. policymakers to deter Chinese activity that exacerbate threats to stability and sovereignty in the region.

Be Wary of Engagement that Undermines U.S. Interests

The current approach to bilateral relations benefits Chinese and harms U.S. interests: allowing China to take advantage of U.S. desire to cooperate and market itself as a responsible partner without needing to reveal much more of the inner workings of its own government and military or be willing to moderate its behavior to ease regional tensions. U.S. policymakers should keep this in mind in light of a recent PLAN request to board the USS George Washington aircraft carrier to learn about maintenance and tactics. This trend requires the United States to take a step back and strategically rethink its relations with and messaging to China: what purpose would it serve the United States to allow China to view U.S. carrier maintenance and operations procedures?

The United States must also be wary of cooperative efforts that, while at face value improve relations with China, could exacerbate tensions with other countries and mar the United States’ reputation. The July 2014 U.S.-China Counterterrorism Dialogue is one of these cooperative efforts that straddles a fine line between constructive and counterproductive bilateral activity. China’s harsh and indiscriminate approaches to “terrorism” in its Xinjiang region—such as gunning down 59 alleged terrorists and arresting 215—have alarmed international actors and human rights watch groups. By participating in a counterterror dialogue with China and having the Under Secretary for Civilian Security, Democracy and Human Rights Sarah Sewall deliver opening remarks, Washington may implicitly send the green light for China’s treatment of Uyghur Muslims in Xinjiang.

The Counterterrorism Dialogue could have been an opportunity for the United States to moderate China’s harsh counterterror activities, but U.S. officials should be concerned that its cooperation is not misconstrued for endorsement of China’s stance. The United States has previously made this mistake: after the September 11 attacks, China capitalized on U.S. vulnerability to terrorism to paint its own domestic ethnic-religious problems as a substantive terrorist issue. In 2002, this resulted in the designation of East Turkestan Islamic Movement (ETIM) as a foreign terrorist organization, granting a carte blanche for China to pursue severe counterterrorist policies without judicious oversight.

While ETIM was taken off the list some years after and the United States has criticized China’s treatment of Uyghurs, there have been no marked changes in Chinese behavior towards alleged terrorists since this designation. Without greater transparency, soliciting cooperation over issue areas such as counterterrorism contradict the United States’ stance of “champion[ing] respect for the rule of law, human rights, religious freedom and democratic principles.”

While the opportunities for high-level bilateral interaction have increased as the United States places higher priority on engagement with China, concrete results addressing pressing security issues in Asia remain intractable and tumultuous.

The United States should remain committed to pursuing meaningful cooperative efforts that promote mutual transparency, support U.S. interests, and alleviate tension, such as restarting the bilateral cyber dialogue. Public statements and exchanges over the past several months about cybersecurity indicate that bilateral conversations about cyber have stalled. Following the U.S. Department of Justice’s May 2014 indictment of five PLA operatives accused of conducting economic espionage on the United States, China suspended all cooperative efforts on cybersecurity, including the U.S.-China Cyber Working Group.

While the two countries had “frank” dialogue at the S&ED this July, there were no outcomes on the strategic side related to cybersecurity and no indication that the Working Group would resume anytime soon. (On the economic side, the Treasury Department made some progress with Chinese counterparts in their mutual agreement to strengthen trade secrets protection through Chinese domestic law and the Joint Commission on Commerce and Trade (JCCT) Intellectual Property Rights Working Group.)

Since President Xi ascended to power, the government has prioritized cybersecurity on its agenda, creating a Leading Group on Internet Security and Informatization in February 2014, aiming to build China into a strong “cyber power.” The centralized efforts indicate that significant thought and resources will go into bolstering its network infrastructure, sharpening its technological capabilities, and crafting a comprehensive strategy.

China’s strategic culture will limit the effects of U.S. pursuits of transparency promotion on cyber, so the United States must be smart about its approach and avoid divulging sensitive information in hopes of reciprocation, such as “the Pentagon’s emerging doctrine for defending against cyberattacks.” Nevertheless, inadequate communication and coordination on cybersecurity—especially as China strengthens its cyber capabilities and strategic direction—could have deleterious effects on the tense bilateral relationship and increase the potential for misperception and miscalculation in Asia. In the absence of cooperation (outside of the commercial sphere), this issue still requires significant effort from the current and future U.S. administrations to unify a cohesive cyber strategy in dealing with China.