Can America Maintain Its Military-Technology Edge? 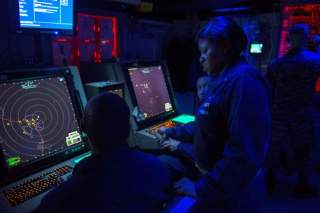 In a recent NDU speech, the Deputy Secretary of Defense, Bob Work, spoke about the need for a third offset strategy in order to maintain U.S. technological superiority. This raises a couple of questions: What is an “offset strategy”? And what is the Department of Defense (DoD) thinking about with this approach?

A keen student of military-technical history, Work is building on two famous previous such strategies. By offset, he means a strategy that allows one force to overcome or mitigate another force’s advantages. Looking back, Work identifies the use of superior U.S. nuclear capability in the early part of the Cold War, under Eisenhower in particular, to “offset” the numerical superiority of Soviet forces. This first offset strategy was successful until the Soviet Union developed a credible second-strike nuclear capability and especially as it achieved nuclear parity and mutually assured destruction with the United States. This left the United States in a bind, as it was no longer credible that the United States would risk its own destruction by using nuclear weapons first against a Soviet invasion of Western Europe.

Accordingly, the United States then developed a second, conventional “offset” strategy, designed to create a stronger conventional deterrent against the numerically superior Soviets. This strategy has since become known as the Offset Strategy.

Developed under the leadership of then-Under Secretary of Defense Bill Perry in the late 1970s, there were two primary components to the Offset Strategy. First, the DOD generated technological superiority by investing its robust research and development (R&D) budget into specific information-based technological enablers and ‘force multipliers’ like global positioning services (GPS), intelligence, surveillance and reconnaissance (ISR) platforms and a range of information and networking technologies that would improve the efficacy of extant U.S. weapons platforms.

Second, this technological advantage, funded, built and controlled by the United States, was preserved through a series of export and trade controls, including the Arms Export Control Act, International Traffic in Arms Regulations and the Missile Technology Control Regime that allowed the United States and its allies to provide or deny access to particular technologies as required.

The Offset Strategy was a masterful success, ushering in an era of unparalleled U.S. military-technical dominance. The strategy was successful because it responded to a well-understood and directive threat and to a particular military problem: the necessity to create a serious conventional deterrent against numerically superior Warsaw Pact forces. It was also perfectly aligned with the prevailing grand strategy of containment. Further, it capitalized on (and contributed to) a real strength: the advanced state of American technological development relative to the rest of the world. As a major side benefit, DOD investments in R&D as part of the Offset Strategy significantly helped the U.S. economy with technologies like GPS, satellites and computer networking, creating entire industries with American companies at the forefront.

While the Offset Strategy propelled the United States to technological dominance during the Cold War, that advantage is now eroding. That is what the Deputy Secretary is responding to in his recent speech, and he is right to be looking for a new strategy. The offset strategies of years gone by provide inspiration and many useful lessons, especially as the U.S. military gets smaller.

But today is also different, and we can’t forget that. Thirty-five years later, the driving factors that catalyzed and enabled the Offset Strategy no longer exist. While no longer facing a clear existential threat, the United States now faces a more uncertain strategic environment with an increasing range of threats to mitigate. The past thirteen years of engagement in the Middle East have underscored how the United States can struggle against smaller forces, not just the numerically superior foes we sought to deter in the Cold War. More broadly, there is no longer a singular grand strategy to act as a guide for DOD technology strategy, R&D or the defense industry. Finally, innovation is not just a DOD preserve. Beginning in the 1980s, the weight of R&D budgets—along with the locus of technological innovation—has shifted to the global private sector, meaning that DOD cannot maintain exclusive access to, or easily control the proliferation of, new technologies.

At the same time, the United States’ increasingly homogenous platforms, predictable capability mixes and well-understood doctrine provides our increasingly diverse adversaries the opportunity to employ their own offset strategies against us. Technically inferior, near-peer competitors can invest in capabilities, such as GPS denial or antisatellite weapons, to deny U.S. technological advantages. Expensive and time-consuming U.S. R&D and capability development further allows these competitors to employ second-mover strategies that rapidly exploit our intellectual property to develop less expensive technologies in larger quantities. Numerically and technically inferior nonstate actors, having learned how to exploit improvised explosive devices to strategic effect, can now obtain GPS, ISR and unmanned technologies from commercial markets as inexpensive information-based ‘force multipliers’ of their own. Such strategies mirror the exact approach that Secretary Perry employed decades ago.

The DOD and its industry partners must, therefore, develop a new strategic approach to military-technical superiority.

A successful technology-superiority strategy must respond to an uncertain, multipolar strategic environment that presents a range of threats from nuclear states to lone-actor terrorists. It must benefit from globalization, enabling effective international collaboration, while leveraging and building on domestic advantages to create positive externalities for the broader U.S. economy. It will also need to leverage widely available commercial technology, while simultaneously creating unique advantage. All of this will have to be achieved in the absence of a clear national-security consensus or unifying grand strategy and in a fiscally constrained environment where DOD budgets pale in comparison to commercial markets.

Unfortunately, the DOD is far from achieving this—and this is why the Deputy’s effort is so important. The current DOD approach to capability development still bears many of the values, processes and organizational structures of the Offset Strategy era but hampered by the strategic drift and inertia that result from decades of bureaucratic growth. This drift has also seen a misinterpretation of Offset Strategy thinking. Secretary Perry himself emphasized that the Offset Strategy should not be interpreted as an effort to merely “. . .use ‘high technology’ to build better weapon systems. . .” Rather, it was an effort to leverage technologies in new and integrative ways. Recent attempts to go just for the high-technology solution, such as the F-22 for example, have been met with disastrous results.

The DOD should instead address its strategic technological needs by leveraging U.S. strengths, adapting the Pentagon as necessary. For example, a strategy that creates a broader variety of less expensive systems on an expedited timeline would add to the uncertainty of our competitors. Leveraging the innovation of the global private sector rather than a narrowly defined ‘industrial base’ can help manage cost and maintain access to competitive technologies, whether those are rapidly developed combat vehicles or collaboratively developed missiles. Exploiting these technologies with diverse and creative concepts of employment, like manned-unmanned teaming, based on the superior education and experience of U.S. warfighters would provide further advantage—even when using similar systems. Easing restrictions on the sale of U.S. technologies, like UAVs, would allow the United States to more effectively inform and learn from global competition and norms. And any new strategy should seek to further enable and prolong the utility of existing platforms, like aircraft carriers. None of these are new concepts, and DOD is exploring some of them now, but significant benefits cannot be realized until new ideas are aligned within an effective strategy.

The realities of a global economy make it unlikely that any one nation in the future will possess the type of military superiority enjoyed by the United States over the past forty years. Yet the DOD can still provide U.S. and allied warfighters with the technological capabilities required to secure our vital interests: The United States still possesses access to unparalleled intellectual, organizational and financial capital. Strong leadership will be a prerequisite for the successful implementation of a future technology strategy, something the Deputy Secretary of Defense can provide. However, he will also need a level of institutional, Congressional and industrial cooperation that is distinctly lacking today.

Ben FitzGerald is a Senior Fellow and Director of the Technology and National Security Program at the Center for a New American Security (CNAS). In this capacity, Mr. FitzGerald leads CNAS efforts to explore the national security implications associated with the rapid pace of technological change by exploring the nexus of strategy, technology and business. He was hired by then-CEO Bob Work. You can follow him on Twitter: @benatworkdc.