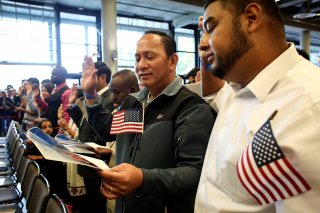 AMERICAN EXCEPTIONALISM is in an exceptionally parlous condition. The Right declares with metronomic regularity that America is exceptionally good; the Left that it is exceptionally bad. Neither side makes much of a pretense at serious historical study or international comparisons. Meanwhile, the liberal establishment consoles itself with the belief that America is a very good thing, but only when it is governed by very good people like themselves.

For now, the demonstration of their own goodness to themselves and the world, however, tends to take a very Protestant evangelical form: that of loud public confessions of their own badness, the public admission of which goes to show how exceptionally good they are.

These attitudes put together might make for a diverting picture if some of its implications were not so menacing. American exceptionalism—or what the scholar D.W. Brogan once called the illusion of omnipotence—has all too often led to grief at home and abroad. Under both George W. Bush and Barack Obama, it contributed to military adventures that damaged U.S. interests and the stability of the Middle East.

At the same time, it is hard not to be worried by serial assaults on the foundation of American exceptionalism, which is the “American Creed”: a belief in exceptional American commitment to and success in the practice of constitutional democracy and the rule of law. Take, for example, the recent “1619 Project” of the New York Times, which essentially reduces the U.S. political tradition, and U.S. independence itself, to no more than a long series of hypocritical cover-ups for slavery and racism.

The reason for worry (leaving aside disputed issues of historical fact) is that the American Creed, and the civic nationalism of which it is the foundation, have been the essential glues that have held a wildly diverse country together. The 1619 Project essentially does just what the chauvinist “Jacksonian” and now Trumpian tradition in the United States has always been accused by critics of doing: reducing the American Creed from a set of universal principles to an ethnic badge of white American civilizational identity and superiority which non-whites cannot share or practice. We should remember Richard Hofstadter’s words: “It has been our fate as a nation not to have ideologies, but to be one.” Without the Creed, America risks becoming something like the Habsburg Empire without the Habsburgs.

Any halfway objective observer must however recognize that the American polity is indeed in pretty poor shape, that American exceptionalism is looking rather battered, and both are in urgent need of renewal. And this should be of concern to liberal democrats all over the world. For while it is true that since 1945 democracy has spread to many more countries, it is also true that in many of these the liberal form of democracy is severely threatened.

Furthermore, in the growing ideological rivalry with China, the United States cannot rely on the threat of communist revolution to drive social and economic elites around the world into alliance with America, because of course China is not threatening any such thing. Unlike the Cold War with the ussr, the contest with China is not one to preserve the free market or religion from bloodstained fanatical revolutionaries: it hinges on the comparative success of two capitalist systems in economic development, the distribution of benefits for the good of society as a whole, social tranquility, and freedoms guaranteed against both state oppression and mass collective hysteria. In this rivalry, the maintenance of international respect for the U.S. political and economic model will be absolutely critical.

IF THE activist and missionary form of American civic nationalism has contributed to disasters, the U.S. democratic example, therefore, remains of critical importance to democracy in the world as a whole. In order to understand both what American exceptionalism was originally grounded in, and the dangers it now faces, it is useful to turn to the foundational analysis of the subject: Alexis de Tocqueville’s Democracy in America (published 1835). Tocqueville’s purpose was to analyze the sources of American democratic success, to herald not just what Tocqueville saw as the inevitable spread of democracy (which he also used to mean what we would call “modern mass society”) in Europe, but also to warn Europeans about the dangers for democracy that lay ahead.

Tocqueville, far from seeing liberal democracy as the inevitable and eternal “end of history,” worried constantly about how liberal democracy could in effect lead to the destruction not only of itself but of what he regarded as enlightened civilization. And unfortunately, much of Tocqueville’s work should make very uncomfortable reading for the American political elites of today: Republicans, chiefly on economic grounds; Democrats, chiefly on cultural grounds; both, on political grounds.

Take culture first: the Western intellectual debate on the relationship between democracy and culture has always focused on the question of whether and how far Western liberal democracy can spread to non-Western societies with very different cultures. On this question the verdict is extremely mixed. There have been some notable success stories in East Asia and some notable failures in the Middle East. There are also an increasing number of cases of “illiberal democracy”—including India, the largest democracy in the world—where forms of democracy co-exist with those of largely authoritarian state structures and chauvinist political parties. In view of these developments, it is more and more difficult to make the standard liberal triumphalist argument that culture doesn’t really matter, is the creation of manipulative elites, and can, therefore, be radically and rapidly changed from above to bring it in tune with liberal democracy.

Tocqueville was absolutely categorical in stating that the success of democracy in America was very largely rooted in culture, or what he called moeurs (mores in Latin, meaning traditions, customs, beliefs, and habits), which comes to the same thing. He also sometimes called these “habits of the heart.” While he saw these as specifically American, he also saw their adoption by other societies as both possible (indeed, to some extent inevitable as a result of socio-economic change) and essential if liberal democracy was to spread:

[I]n America it is religion that leads to liberty … Anglo-American civilization is the product (and one should continually bear in mind this point of departure) of two perfectly distinct elements which elsewhere have often been at war with one another but which in America it was somehow possible to incorporate into each other, forming a marvellous combination. I mean the spirit of religion and the spirit of freedom.

As Robert Bellah and his colleagues pointed out in Habits of the Heart, Tocqueville differed from his French near-contemporary Crevecoeur in not seeing the American as a “new man,” but rather as a man who could live happily and successfully in a new society precisely because his own identity was firmly rooted in biblical Christianity. This, Tocqueville also believed, was an essential barrier against an unrestrained and therefore socially, morally, and psychologically destructive individualism which he feared would otherwise take command of Americans’ souls and wreck their communities—as it has indeed often done in recent decades.

With the partial exception of the Southern slave-owners (the nearest approximation to European hereditary landowning aristocrats), Tocqueville was also unequivocal about the fact that the American culture that underpinned successful democracy resided in the American protestantoid middle-class—“protestantoid” because a particularly brilliant perception of his was how new religions in America (starting with the Catholics) have had a strong tendency to adopt many of the forms and attitudes of Protestantism, and in the process also to assimilate to American democracy.

Tocqueville saw the United States—as it was in the 1830s—as a country overwhelmingly dominated by the middle-classes (including, of course, middle-sized “yeoman” farmers). He was also convinced that the stability and the long-term survival of democracy depended on this class and on the maintenance of a society without great extremes of wealth and poverty. Democracy in America begins,

When Tocqueville repeatedly equates “democracy” with “equality of conditions” and makes the former dependent on the latter, he is speaking not only of legal equality of status (unlike traditional and previously feudal Europe), but also of a society which (once again, with the tragic exception of Southern slavery) did not have great extremes of rich and poor. Moreover, he wrote, so dominant were middle-class mores that even the few rich were careful to practice middle-class behavior and avoid ostentation and conspicuous consumption.

Tocqueville also saw the wealthy American businessmen and industrialists of his day as lacking strong influence over politics and deferring to the middle-classes. Nonetheless, he worried that “equality of conditions” could not be permanently guaranteed, and warned that,

The friends of democracy should keep their eyes anxiously fixed in that direction [the potential development of a capitalist plutocracy]. For if ever again permanent inequality of conditions and aristocracy make their way into the world, it will have been by that door that they entered.