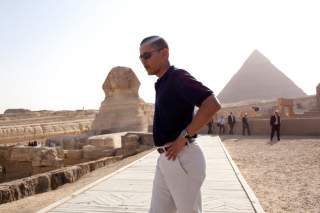 Mohamed Soltan, a dual U.S. and Egyptian citizen, was sentenced to life in prison this past week for participating in Muslim Brotherhood protests, adding new unnecessary tensions to an already fragile relationship between the United States and Egypt.

This verdict comes shortly after President Obama’s important decision to release the remainder of the United States’ committed military aid, which was frozen, in line with existing U.S. congressional legislation, after President Mohamed Morsi’s overthrow. Obama’s decision to use a national-security waiver to release the aid reflected both his support of a key regional ally that is presently facing a number of security challenges and an attempt to set a new tone in relations with Cairo after almost two years of tension. This announcement came weeks after Secretary of State John Kerry visited Sharm el Sheikh in March to participate in Egypt’s economic summit, where he pledged Washington’s full support to the president’s ambitious plans to overhaul the economy.

While ties between the Pentagon and Egypt’s military have been much stronger than any other aspect of this decades-old bilateral relationship, Obama has been quite reluctant to embrace Sisi’s rise to power and his subsequent suppression of Egypt’s opposition. Further, senior policy makers in Cairo have shared their own concerns with Obama’s quick embracing of President Morsi and the Muslim Brotherhood’s attempts to consolidate power in Egypt. Tensions still linger amongst Egyptian officials, who share, along with the governments of the UAE and Saudi Arabia, concerns that President Obama didn’t stand by longtime U.S. ally Hosni Mubarak prior to his resignation.

Most publicly, these differences have been expressed in the Egyptian president’s willingness to explore alternative defense relationships with both Russia and France, his refusal to notify the United States of his military strikes in Egypt and his pursuit of U.S.-funded NGOs in Egypt. The announcement of Soltan’s sentencing, which was made less than two weeks after Obama’s aid release, is even more provocative in that President Obama had made several personal appeals to his Egyptian counterpart to release him.

President Sisi’s refusal then to show any mercy to an American citizen after Obama’s efforts to improve relations is a notable and unnecessary rebuff at a time when Egypt can’t afford tense relations with the United States. With Gulf states expressing growing concern with the deepening costs they have had to spend to float Sisi’s government, Sisi has sought international investment as a way to strengthen his country’s economic position. Egypt has also sought to regain its tourism position, but with new visa restrictions, violence on the Sinai and this recent judicial case against an American citizen, the current environment in Egypt is not an attractive one.

While the Egyptian president may have seen this as a slight rebuff, this act makes Sisi’s human-rights record more of a domestic issue for President Obama than it previously had been, and will make it harder for the administration politically to reset relations with Cairo. The president has already shown his own reluctance to work with Sisi; and Sisi’s refusal so far of clemency only deepens the impression that the government in Cairo is not a partner with whom Washington can work.

However, it would be a mistake for Obama to turn away from his attempts to reengage Cairo. In terms of the president’s own doctrine (where he made the case to Thomas Friedman that the United States should support instead of burden security responsibilities in the region), Cairo is an important partner to have when confronting common regional challenges. An economically prosperous Egypt is beneficial to the region and in a stronger position to counterbalance state and nonstate actors that pose a threat to U.S. and Egyptian interests.

This recent case shows that there is still a long way to go in building trust between both states and creating an improved working relationship. Sisi’s actions have further damaged relations, but not beyond repair. Washington needs a concerted and sustained policy of engagement that emphasizes primarily common security cooperation and the incentive of U.S. investment. Obama should stress that a transparent and fair legal system, along with a stable rule of law, is a necessary underpinning for sustained foreign investment. The legal environment—as evidenced by the Soltan case—isn’t indicative of that and is more a hindrance than a help in supporting Sisi’s presidency. Such engagement, which is in the interest of the United States, will require investment from Obama, regardless of how difficult working with Sisi may be.

Andrew J. Bowen, Ph.D., is a Senior Fellow and Director of Middle East Studies at the Center for the National Interest.