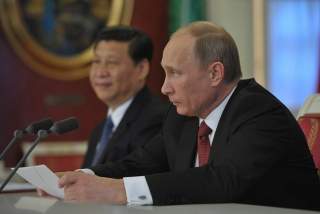 For centuries, European royal families forged marital alliances with friends and adversaries in order to ensure security and influence. Prominent among them was Russia. In the 300 years prior to Czar Nicholas II’s 1894 marriage with Queen Victoria’s granddaughter Alexandra, almost at any point Russia was tied by marriage to its European neighbors. Today, it is no longer royal blood that solidifies Russia’s foreign relations but the energy pipelines that run the lifeblood of national economies.

Vladimir Putin’s coercion of Europe through his control over its energy supply is widely known. But post-Crimea, his energy leverage over Europe may have reached its apex. By the end of this decade, North American liquefied natural gas (LNG) will land in Europe from the West. From the east, the Trans-Anatolian and Trans Adriatic Pipelines will open a new energy corridor from the Caspian to Europe, crowding out Russia’s gas even further. To sustain Russia’s economy and to maintain its position as an energy power, Putin must extend Russia’s energy tentacles into Asia, where the thirst for oil and gas is insatiable.

Recently, the Russian parliament wrote off 90 percent of North Korea’s debt, a gesture estimated at $10 billion, in exchange for Pyongyang’s agreement to build a pipeline that would run from Sakhalin through North Korea to South Korea, the world’s second largest gas importer, with the goal of supplying South Korea with 10 billion cubic meters of gas annually. In doing so, Russia will not only assign North Korea the same role it assigned Ukraine—a vulnerable energy-transit country which holds the key to an economy much larger than itself—but it could also exert influence over the third largest economy in the Asia Pacific, potentially raising South Korea’s dependence on Russian gas from 6 to 30 percent.

Important as the South Korean market may be for Russia, China is an even bigger prize. Putin’s ability to secure permanent access to the Chinese gas market is as crucial for his own 'Pivot to Asia' strategy as Russia’s gas is crucial to China’s recently declared war on smog. Putin’s visit to Beijing this week provides the two neighbors an opportunity to seal a massive gas deal through a yet-to-be-built pipeline from Western Siberia to Northwestern China. This project, which has suffered endless delays over the past fifteen years, mainly due to disagreements over price, may finally become a reality as both countries need each other now more than ever before.

Relations with China are critical to another piece of Putin’s pipeline strategy—his plan to penetrate the Indian energy market. Russia and India are negotiating the construction of a $30 billion pipeline—the most expensive ever—to connect Russia’s Altai mountain region to the Xinjiang province in northwest China and then to northern India. Unlike the gas pipelines to Korea and China, the pipe to India will transport oil. It is a little known fact that Russia is much more of an oil exporter than a gas exporter. It exports 70 percent of its crude production while exporting only 30 percent of its gas production. From a financial standpoint, its oil revenues are almost seven times larger than gas revenues. There is no better market for Russia’s oil than India, which has just displaced Japan to become the world’s third biggest economy in terms of purchasing power parity.

The above three pipelines to China, India and the Koreas (should they be built) would make one third of humanity beholden to Russia’s energy resources and provide Russia inordinate power on the world stage, which could make its shenanigans in Europe a fond memory. However, the United States has failed to articulate an alternative vision for Asia’s energy security. In fact, energy security played almost no role in President Obama’s recent visit to Asia.

To thwart Russia’s energy export scheme, Washington must present its own strategy for Asian energy security and convince its allies in Asia of its advantages. This will not be easy due to Russia’s geographical proximity to Asia, but there are options to consider.

First, as guarantor of South Korean security, Washington should publically take a strong position against the Russia-Korea pipeline. It should clearly express its concern to Seoul that this pipeline will not only embolden and enrich Kim Jong-un, but it will also inject Russia into the already challenging security landscape of the Korean Peninsula. Here Washington would find a common interest with Beijing, which would also prefer not to see Russia become part of the dynamics in the Peninsula.

Second, Washington should convince its Asian allies that it is committed to becoming a leading energy-exporting country and a major player in the global energy-trade system. This means expediting the permission process for export terminals for coal and LNG and the removal of the anachronistic four-decade ban on crude oil exports.

Third, the United States should enhance cooperation with Asia on unconventional gas. China owns the world’s largest shale reserve. Japan is a global leader in the development of methane hydrates. According to estimates, there is more energy in the world’s methane hydrates than in all the world’s oil, coal and gas put together. Unlocking the secret to their safe and environmentally responsible extraction could be a game-changer in the global energy landscape.

Fourth, the United States should support measures aimed at reducing LNG prices in the Asia-Pacific to make LNG more competitive with Russian pipeline gas. The price of natural gas in the Asia-Pacific is mostly indexed to oil or oil products. In order for consumers to enjoy a competitive gas market, pricing should be indexed to spot prices that are tied more closely with supply and demand fundamentals in the region (gas-to-gas competition). However, despite the fact that the Asia-Pacific is the second largest gas market in the world, it lacks a single natural gas trading hub to facilitate the transparent exchange of the commodity and provide more competitive prices. The amount of gas currently traded via pipelines is very limited, and the market relies increasingly on LNG, which is more conducive to gas-to-gas competition. If Russia succeeds in carrying out its pipeline strategy this will undermine the prospects of an Asian trading hub, as pipeline gas is more likely to be tied to oil. This will result in perpetuation of the oil indexation to the detriment of the region’s economies. Unsurprisingly, both OPEC and the Gas Exporters Country Forum (of which Russia is a member) endorsed oil indexation as the preferred pricing scheme to trade natural gas. The United States should work with the governments of the Asia-Pacific—China, Japan and South Korea—to gradually shift the gas market toward gas-to-gas competition and toward the establishment of at least one regional trading hub. This will not happen overnight but the intention and vision should be articulated in order to steer investments in natural gas infrastructure and to facilitate the emergence of a competitive and transparent market.

Finally, Washington should strive to include China and India as members of the International Energy Agency (IEA), even though those two countries are not members of the OECD and therefore technically not eligible for IEA membership. Being part of a multinational energy-security mechanism would strengthen China and India’s connection to the club of rich industrialized democracies instead of to Russia, whose application for OECD has been suspended in light of its recent behavior.

Transnational pipelines are the contour lines of geopolitics in the twenty-first century. Russia’s design is now apparent to all. America needs to show it has one as well.

Gal Luft is co-director of the Institute for the Analysis of Global Security and a senior adviser to the United States Energy Security Council. He is also co-chairman of the Global Forum on Energy Security.