Can America Stop a Wider War Between Armenia and Azerbaijan? 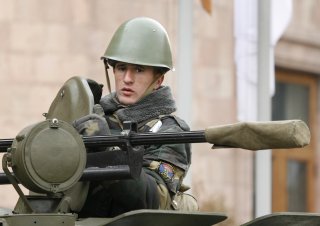 A reason for this inaction is, perhaps, that there are no easy solutions. Getting involved in the South Caucasus implies involvement in highly contentious conflicts—including those in Georgia—that overwhelmed Western powers might prefer to ignore. It also means challenging conventional wisdom. While Westerners have welcomed the domestic reform efforts of Armenia’s new government, which are very real, they seem to have forgotten that a more democratic government does not mean a more peaceful one. In fact, as political scientists like Jack Snyder have long shown, countries in transition to democracy are at the greatest risk of involving themselves in armed conflict, given the government’s need to respond to nationalist sentiments. The fact that Russia and Iran have cooperated in supplying Armenia with weaponry in the midst of the fighting should also give western leaders pause about the structure of power relationships in the region, and the interest of those powers in destabilizing the east-west corridor connecting Europe with Central Asia.

By contrast, getting involved in the South Caucasus will imply the difficult task of managing recalcitrant partners like Turkey. While Turkey has turned increasingly anti-Western in recent years, the crises in Libya and in the Caucasus have clearly shown that more often than not, Turkish interests align with the West and not with Russia. Turkish leaders may not yet fully realize this, upset as they are over Western support for Kurdish groups in Syria aligned with the anti-Turkish PKK terrorist organization. Still, the recent flareup provides an opportunity to work to restore cooperation with Ankara to safeguard the common interest in the security of the South Caucasus as a transit corridor.

The ongoing fighting is a reminder to America and Europe that they ignore security in the South Caucasus at their own peril. Much is at stake, and the conflict’s path of escalation can only be reversed by rebuilding a credible international mediation effort that aspires not only to maintain the status quo but to actually resolve this conflict once and for all. That can only be done by the Western powers and will require a broader re-engagement of the South Caucasus. If that does not happen, then the current flareup risks being only a precursor to much larger wars.

Svante E. Cornell is the director of the American Foreign Policy Council’s Central Asia-Caucasus Institute, co-founder of the Institute for Security and Development Policy and a Policy Advisor to JINSA’s Gemunder Center for Strategy.