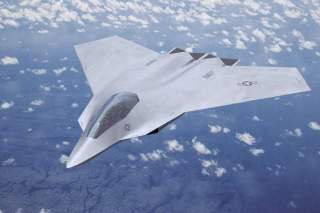 The U.S. Navy’s sixth generation F/A-XX replacement for the service’s aging fleet of Boeing F/A-18E/F Super Hornet strike fighters should be designed primarily for an air-to-air role. A strike capability can be treated as a secondary concern, at least that’s the view of some industry officials.

According to some industry insiders with deep knowledge of both the Lockheed Martin F-35C Joint Strike Fighter and the Super Hornet, neither jet can adequately handle new threats like the Chinese Chengdu J-20 or the Russian Sukhoi T-50 PAK-FA. The Chinese J-20 is particularly threatening, according to one senior industry official with an extensive fighter pilot background.

“When you see these next-generation fighters, the PAK-FA out of Russia and the J-20 out of China and some of their new missile technology, our advantage is dwindling,” said one senior industry official.

Typically, fighter pilots measure the capabilities of their mounts and compare the relative advantages and disadvantages of their jet to their enemies’ in the hopes of finding an advantage. That could mean finding a part of the flight envelope where one’s fighter turns better or out accelerates the enemy jet—or perhaps where friendly missiles have a range advantage. However, against the J-20 and PAK-FA, only the Lockheed Martin F-22 Raptor offers any real advantages, the official said.

(Recommended: 5 Most Lethal Fighter Jets of All Time)

One area where the J-20—for example—completely outmatches the F/A-18 and F-35, is supersonic performance. The J-20 can cruise at high supersonic speeds without using fuel guzzling afterburners for extended periods, which allows it to impart far more launch energy into its missiles.

“Take a J-20 that can cruise at mil power supersonic out to 300 plus miles before he has to turn around and come back, [this] makes it really hard for a subsonic fighter [that needs afterburners for supersonic flight] to go into that environment and survive,” said the official. “Especially in an away game when we are outnumbered.”

In a complicated air-to-air battle where there are many fighters involved, there are instances where one side or the other will have to try to “separate”—which basically means try to runaway at high speeds.

(Recommended: 5 Most Lethal Submarines of All Time)

A fighter that needs to use afterburners for supersonic flight can typically only maintain those speeds for a minute or two before fuel becomes a critical problem. “If he’s in mil power supercruising, running you down, that’s not a good place to be,” the official sad.

Another source agreed that the F/A-XX might be more geared toward the air-to-air mission. The second official cited two major reasons. First, the F-35C can cover the strike role, and second, the sheer number of enemy aircraft that future carriers might faceoff against. “The F/A-XX requirements may well be biased towards fleet air defense versus strike operations,” the second official said. “The primary issue is the likely threat of numerical superiority in multiple dimensions.”

The second official added that, in his opinion, the F-35C can handle the J-20 one-on-one. However, if friendly forces are massively outnumbered, and they don’t have enough missiles to shoot down all the incoming enemy aircraft, the situation changes.

“An F-35C can readily handle a J-20, but no group of aircraft performing fleet air defense can be expected to handle being outnumbered by more than the number of shots they have,” the second official said.

If the future F/A-XX is going to have to carry more missiles, it will necessarily need to have a large volume—if the jet is going to be stealthy, the official said. But because a flying wing design is needed for all-aspect broadband stealth—there is no room to stack weapons bays along the length of the jet if one assumes the F/A-XX will be a supersonic design. By necessity, a high performance supersonic aircraft has to be long and slender in order to have a good “fineness ratio” for efficient performance.

As such, new weapons will have to be developed. “A supersonic, flying wing fighter will likely require smaller missiles, or rely on directed energy weapons like a high energy laser to minimize internal payload volume,” the second official said. “However, broadband, all-aspect stealth is certainly possible for a subsonic carrier-based aircraft, where fineness ratio is not a concern.”

The first industry official, for his part, said that the Navy needs to develop the F/A-XX with an air-to-air bias. Basic attributes would include high-supersonic cruise capability at altitudes between 50,000 and 60,000 feet, stealth, advanced sensors and advanced weapons. “I think you can always make a good fighter into a good striker,” the official said. “They’re doing it with the F-22. There is no fighter in the world as good as an F-22.”

Meanwhile, John Stillion, an analyst at the Center for Strategic and Budgetary Assessments argues in a recent paper that a next-generation fighter would not necessarily be a supersonic fighter, but rather a subsonic stealthy flying wing that would carry extremely long-range missiles. In simple terms, Stillion argues that stealth, payload and sensor capability will trump traditional fighter metrics like speed, altitude and turn capability.

One senior Air Force official said he agreed to an extent. But the Air Force official added that while traditional metrics might decline in importance, they will still be prominent in future fighter aircraft like that service’s F-X or the Navy’s F/A-XX—where the two services are hoping to kick-off a joint analysis of alternatives next year.

However, the early consensus is that the Navy and Air Force are likely to build separate platforms that share key technologies.

Meanwhile, some doubt that the Navy can afford an F/A-XX when looking at the service’s future budget. There are “a pile of must-pay bills like the Ohio-class replacement program,” the source said. “Not sure they can swallow a big development bill for F/A-XX, and field it in time.”