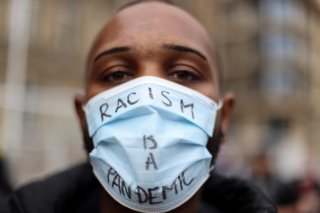 The Black Lives Matter movement already has some major achievements. However, whether it will lead to significant reforms or slowly peter out—somewhat like Occupy Wall Street or the post-Parkland March for Our Lives, also considered pivotal movements in their moments—remains to be seen. To spell out what is next needed for the movement to realize much more of its potential, I need to take you briefly to my sociology class.

My young students often ask me, how does one bring about a major social change? They are surprised when I respond that this is a uniquely easy question. It is easy because there is only one answer: join or form a social movement! Only such movements can withdraw legitimacy from an existing social structure and lay the moral and social foundations of a new one. True, no one movement has been able to realize the founders’ highest dreams, but all have brought about major changes.

Before I studied social movements—including the women’s suffrage, civil rights, environmental, and women’s rights movements—I experienced firsthand what a movement can achieve. I was a teenage Zionist before there was an Israel. Famously, Theodor Herzl first articulated the idea that Jews have a right, like other ethnic groups, to have a state of their own and that it should be established in the land where such a state once existed. The idea inspired first a few, then many, but for decades it was considered a very visionary vision. Slowly, actions followed talk; Jews resettled in the ancient land and the movement led the people to fight for and establish a state. Some argue that this aspiration was misplaced, that it caused great injustices to the Palestinians. However, even a severe critic of Israel cannot deny that this is a case of an idea leading to a social movement, which has had mammoth consequences.

How do social movements come about and what are their main stages? Where is the Black Lives Matter movement in terms of these stages? Such movements typically start with moral dialogues that lead to the formation of new shared understandings. These take place not only in families and small communities but also on a national (and sometimes even on an international) level. A “moral brief” and/or dramatic event often serves as the starting point for these moral dialogues. The moral brief critiques the status quo of moral culture and introduces a new one. For example, Silent Spring served as a moral brief for the environmental protection movement, and The Feminine Mystique for the women’s movement, and Martin Luther King, Jr.’s speeches for the civil rights movement. Influential dramatic events include the Valdez oil spill and Rosa Park’s refusal to sit in the back of the bus.

Once a moral dialogue takes off, it becomes the subject of extensive discussion in personal settings—over dinner, in bars, at places of worship. These discussions are then amplified by the national media—in call-in shows, in panel discussions on TV, and on social media. When moral dialogues reach a successful closure, the result is a new shared understanding, one that involves changes in norms, values, and attitudes. Furthermore, these new understandings lead to voluntary changes of behavior, such as changes in the ways people express themselves (avoiding the n-word, addressing women properly) and the ways they act, for example stopping the practice of throwing trash out of their car windows and starting to recycle.

The Black Lives Matter movement has already engendered a profound and effective moral dialogue. Many White folks admit that, for the first time, they are reconsidering their views about police brutality and the ways that Black communities are—and ought to be—treated. The New York Times reported that, in the span of just two weeks, support for the Black Lives Matter movement increased by fifteen points among White voters. Furthermore, the article notes that a recent “Monmouth University poll found that 76 percent of Americans consider racism and discrimination a ‘big problem,’ up 26 points from 2015.” At many Black Lives Matter demonstrations, White protesters outnumber their Black compatriots. In some of the protests in the wake of the killing of George Floyd, white people made up 65 percent of protesters in Washington, 61 percent in New York, and 53 percent in Los Angeles. And the recent protests have been bigger and more widespread than previous ones. Estimates vary from fifteen to twenty-six million in the United States.

Recently, quite a few symbolic acts have made the news. Institutions have changed their names, e.g., Princeton’s trustees removed Woodrow Wilson’s name from one of its major schools (after refusing to do so in 2016). Statues considered offensive were torn down or relocated. The Mississippi legislature voted to modify its flag. Beyond these mainly symbolic acts, major corporations withdrew their ads from Facebook for being slow to curb hate speech. All the major social media platforms changed their policies on allowing hate speech and false facts. New York City’s police department budget was slashed by a billion dollars. Several school districts nullified their contracts with the police. Moreover, some police departments are changing their standing orders.

But what is called for is a national transformation; the Black Lives Matter movement cannot deal effectively with scores of thousands of municipalities and their respective police departments. For the movement to have major, national legislative effects, it must develop a stronger organizational expression. So far, the movement has been largely organic and highly decentralized, which is to its credit but also prevents it from taking the next step. On the national level, there is no phone number, no leaders or representatives to speak for the Black Lives Matter movement, and, thus, no one for those who seek to work with or to negotiate with the movement to turn to. The House of Representatives passed a bill to reform policing nationwide, but, when the Republican-controlled Senate moved to draft a sister bill, the Justice Act, the police union representatives were there in full force and exerted much pressure, considerably weakening the bill. There were no matching BLM representatives to stand up for the bill.

Next, successful social movements often need to build coalitions. The civil rights movement found support among many white liberal groups as did the women’s rights movement and the rights movement for lesbian, gay, bisexual, transgender, and questioning individuals. Somewhat surprisingly, there are reports that quite a few African Americans participating in Black Lives Matter protests seem quite leery of whites who join in. Anthony Beckford of the New York Times reported that the president of Black Lives Matter Brooklyn was “feeling uneasy about the large numbers of white people who had shown up” at a recent protest. He told the reporter that he worried that white nationalists were hiding in the crowd and thought, “I feel outnumbered. Is my life in danger? “He added, “Our fight is our fight. Their privilege can amplify the message, but they can never speak for us.”  Black advocates issued extensive guidelines to help white people to respectfully address the issues at hand. Such misgivings may be understandable, and they are far from unprecedented. However, it takes a simple nose and vote count to realize that the Black Lives Matter movement will be much more effective if it keeps working with liberal whites. Hispanics are actively participating in Black Lives Matter demonstrations, however, they are increasingly frustrated that they are subsumed in the “black vs white” narratives and their special concerns, especially about ICE and immigration, are ignored.

In the process, Black Lives Matter advocates may have to stop talking about defunding police departments, let alone abolishing them, and agree to talk instead about reimagining police departments (or converting them into public safety departments). And Black Lives Matter champions may have to separate longer-run, far-reaching goals—such as eliminating racism, gaining social justice, and ending inequality—from immediate goals, such as redoing police departments and ensuring that minority neighborhoods receive all the testing, contact tracing, and health-care services needed so that their coronavirus rates will not be higher than those in White neighborhoods.

Last but not least, the forthcoming election is particularly pivotal for the Black Lives Matter movement and for all other matters that concern Black communities (and all other Americans). Unfortunately, there is a considerable amount of ambivalence in those communities about the efficacy of elections and considerable doubt that the Democratic party will deliver much of what they so keenly sought. (Many found the Obama administration rather disappointing.) However, if those who support reforms consider not just the size of the potential upside of a Biden administration but the depth of the downside of four more years of Trump—particularly of a Trump no longer held back by a desire to be reelected—they will realize that, for the next few months, the first, second, and third priority of the Black Lives Matter movement should be to bring out the vote.