Can Central Asia Seize the Initiative? 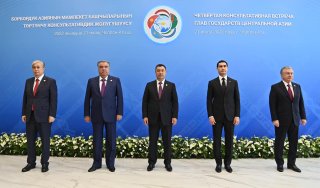 SINCE THEIR independence from the USSR, the five Central Asian states that emerged from the wreckage of the Soviet Union in 1991 have been the object of great power dreams. Russia, with steady persistence, has tried to lure them back into its sphere of influence, if not of direct control, through economic and security alliances. The United States and Europe have worked to develop them as market economies, and to implant civil society and democratic institutions there. Meanwhile, China assigned them key roles in its Belt and Road Initiative and loaned them billions to develop economic strengths that complement Beijing’s own. Applying Julius Caesar’s classic divide et impera maxim, all these major powers have offered rewards for cooperation and withheld them from the recalcitrant. As a result, the Central Asians risked becoming mere objects of great power maneuvers and not subjects in their own right.

This summer, the Central Asians themselves took two steps to overcome this fate. First, on July 21 the presidents of Kazakhstan, the Kyrgyz Republic, Tajikistan, Turkmenistan, and Uzbekistan, meeting at Issyk-Kul in the Kyrgyz Republic, signed a far-ranging agreement to coordinate their efforts by forging a web of institutional links. These cover areas as diverse as trade, economics, social policy, ecology, medical research, and security. Such a regional consultative structure is urgently needed. Until now, Central Asia has been the only major world region that does not have its own web of institutional ties, i.e., a structure for formulating common policies and organizations capable of implementing them. This left the region at the mercy of major powers and of neighboring states, all of which have proven adept at playing Central Asians off against each other.

Furthermore, on July 26 the same regional states, supported by senior officials from several dozen other countries worldwide, including the United States, Russia, India, the European Union, and China, convened in Uzbekistan’s capital, Tashkent, for the purpose of expanding contacts with the new government in Kabul. Their immediate goals were to eliminate threats from extremist bands operating from Afghan territory and to identify changes in Taliban policies that would open the door to broader interaction between Afghanistan, its Central Asian neighbors, and the world. These meetings covered areas as diverse as information, finance, and women’s and minority rights. Their longer-term objective was to improve relations to the point that the Central Asians could open direct transport corridors through Afghanistan to Pakistan, India, Southeast Asia, and Iran.

Whether these two ambitious initiatives will succeed is an open question. Their very existence, however, reflects the Central Asians’ determination to shape their own destiny and to emerge as a world region with linking institutions comparable to the Association of Southeast Asian Nations (ASEAN), the Baltic Council, or other regional bodies worldwide.

WHY, THREE decades after gaining independence, have the Central Asian states suddenly focused on linking arms and collaborating? Three very different developments gave rise to this important movement. First, the unplanned and abrupt American withdrawal from Afghanistan left the Central Asian countries facing a chaotic and potentially dangerous neighbor to the south. Besides threatening a rise of instability across the region, the tumult in Afghanistan extinguished the hope of opening southward trade routes that would give the Central Asians direct access to the Indian subcontinent and the booming economies of Southeast Asia. The importance of that potential “door to the south” cannot be overestimated. Without it, all Central Asia would be left under Russia’s economic and political thumb and unable to constrain China’s economic incursions. Only with such a corridor to South Asia would these countries be able to affirm their own sovereignty and independence while at the same time establishing balanced and constructive relations with all the major political and economic powers.

Second, Russia’s unprovoked invasion of Ukraine sent a shock wave across all Central Asia, not least because, like Ukraine, all the states in that region had only recently freed themselves from Russian rule and now feared that Moscow was trying to impose it anew.  This was no mere paranoia on the part of the new sovereignties. Had Vladimir Putin not compared himself to Peter the Great, who expanded Russia’s territory by conquering neighbors? Had Dmitry Medvedev, head of Russia’s Security Council and former Russian president, not announced that the attack on Ukraine was but the first step towards reassembling all the lands that had formerly been part of the Soviet Union? Central Asians had already established contacts with the West, but those links did not suffice to enable them to counterbalance pressures from the north and east. The obvious next step was to create new economic and political links with South and Southeast Asia. But this requires reopening links of communication and trade that have lain dormant since the rise of the Soviet Union.

The third factor that gave rise to the new spirit of regional vitality on display at Issyk-Kul and Tashkent was the rise of Shavkat Mirziyoyev as president of Uzbekistan. His predecessor, Islam Karimov, had solidified Uzbekistan’s independence by walling the country off from its neighbors, including the other four Central Asian states and Afghanistan. Uzbekistan advanced, but at the price of the resentment of its regional neighbors and the hostility of the West, which condemned its heavy-handed treatment of its own population. Mirziyoyev, Karimov’s former prime minister, brought a sharp change of course after his election in 2016. In a series of dramatic moves, he instituted legal reforms, set about developing a market economy, and loosened many long-standing controls on the Uzbek populace. Most important, he declared peace with all Uzbekistan’s neighbors, opened cross-border contacts and trade, and began systematically reaching out to the other Central Asian states. By so doing, he launched the movement that bore fruit in Issyk-Kul and Tashkent.

What was actually accomplished in the region-wide protocol—formally known as the “Agreement on Friendship, Neighborliness, and Cooperation for Development of Central Asia in the 21st Century”—that the five presidents agreed upon in July? The document includes thirty-two sections that are designed to “consolidate their efforts” for mutual benefit. Of course, it commits signatories to respect existing borders, to not interfere in the internal affairs of other partner countries, and to resolve differences peacefully (sect. 2). But it goes far beyond this. Thus, section 5 calls for mutual support in the face of threats to the “independence, sovereignty, and territorial wholeness” of any member state. Backing up this call, the protocol (sect. 6) commits the signatories to abstain from joining any military bloc that might threaten any of the five states, and to forbid their territories to be used by any foreign state for activities directed against any of the other member states.

Nor were these mere words. Section 7 calls on the parties “to realize mutual action to develop collaboration in military and military-technical sphere on issues of mutual interest.” This parallels Article V of the Washington Treaty that governs the actions of NATO members, which states that an attack on any NATO member is to be considered an attack on them all. Section 7 also commits the signatories to coordinate their actions with respect to all other international and regional organizations to which they may belong. Among threats requiring such coordinated action are specified: terrorism, extremism, separatism, international criminal groups involved with narcotics and arms, and human trafficking. However, the same logic would extend to all other threats to the sovereignty of any member state. The goal, states the protocol, is to establish all of Central Asia as a “zone of peace.”

The many other chapters of the protocol commit members to develop structures for cooperation in legislative and judicial matters, transport, logistics (sect. 14), and all activities affecting trade and investment. The document then goes on to commit members to joint action with respect to the reconstitution of the depleted Aral Sea (sect. 19). Topping off this ambitious agenda is the call for closer links among the academic institutions of member states (sect. 20, 21), structured exchanges of teachers and specialists, the sharing of fundamental and applied research (sect. 24) in diverse fields, including medicine and technology, and the development of common information systems (sect. 23). Tourism also claims a place in the document (sect. 27), which calls for region-wide tours supported by common visas.

One may object that the five presidents papered over important differences between the languages, histories, and cultures of the signatory states. Anticipating such criticism, they went out of their way to affirm that Central Asia constitutes “a single historical and cultural space” (sect. 25), in which diverse peoples have fruitfully interacted and collaborated for millennia. Their agenda called for studying and making known these neglected commonalities. Moreover, the presidents acknowledged that within the borders of each country are linguistic, cultural, and religious minorities. On this delicate issue, they all agreed to support such minorities within their borders and enable them to thrive without compulsion from the national governments (sect. 26).

Three of the presidents signed the protocol at the Issyk-Kul meeting, while the other two—Emomali Rahmon of Tajikistan and Serdar Berdimuhamedow of Turkmenistan—gave assurances that they would sign at the next meeting of the group. The former evidently wanted first to resolve the conflict on the Tajik border with Kyrgyzstan, while the latter, in office for only three months, wanted first to consult with his colleagues in Ashgabat. Both assured their colleagues of their support for the project.