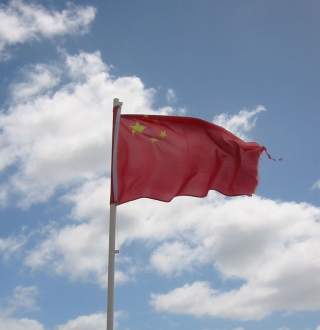 The idea that China cannot rise peacefully has become something of an international-relations truism. The story here is simple: as China’s economy grows, its military will follow, and just as other great powers have used force to achieve their foreign-policy goals, so, too, will China. Yet while much ink has been spilled to explore the security implications of China’s rise, relatively few attempts have been made to examine the potential effects of a sudden and prolonged economic downturn. This might be about to change.

As the Wall Street Journal recently reported, China’s growth will decline sharply in the coming decade, from 7.7 percent in 2013 to 3.9 percent between 2020 and 2025. Some analysts are more pessimistic, projecting future growth rates as low as 1.6 or 1.7 percent. (To put these numbers in perspective, China grew at an average annual rate of 10.2 percent from 1980 to 2011.) These trends have led some at the National Interest to claim that China is headed for collapse and that we may be approaching the end—not a delay—of China’s economic rise.

What will be the geopolitical implications for China, its neighbors and the United States if the Chinese economy tanks? Would China be taken off of its supposed collision course, or would conflict remain unavoidable?

Let’s start with a slight, but necessary, caveat: we have no empirical evidence for future events and, therefore, need theories to answer these questions. That being said, there are two that may be particularly helpful. The first theory assumes that an economic downturn in China will force the Chinese Communist Party’s leadership to turn inwards, leaving little time and energy to pick fights with its Pacific neighbors (let alone the United States). Chinese leaders will instead devote their attention to domestic policies, hoping to get their “house” in order.

Unfortunately, given the scale and scope of China’s current international disputes, this story is unlikely to pass.

Which brings us to our second theory—one that I believe is more likely to materialize. This theory posits that an economic downturn in China will cause a crisis in legitimacy for the Chinese Communist Party, who will in turn point to external threats to bolster its internal legitimacy. China’s leaders, in other words, will play the nationalism card, perhaps provoking an international conflagration in one or more of the aforementioned flashpoints.

We’ve seen this movie before. Following World War II, the Chinese economy was in shambles, yet China’s leadership did not turn inward, but rather to the Korean peninsula. Similarly, during the economic catastrophe that was the Cultural Revolution, China’s leaders turned to Vietnam. Zhang Lifan, a Chinese historian, explains that “historically, during every period with many deep conflicts within the country, there has been a surge of anti-foreign sentiments from the party.” Things are no different today.

This year alone, China’s state-run newspaper, The People’s Daily, published forty-two articles blaming China’s domestic problems on foreign forces. Even in the midst of this month’s APEC meeting (which is typically a golden opportunity to show off diplomatic credentials and feign bridge-building enthusiasm), President Xi Jinping publicly praised a young blogger who is now famous for his nationalistic writings—some of which border on xenophobia.

Chinese leaders won’t be able to easily turn off the nationalist anger that is created. And if China’s economy does indeed sink, we should expect more of this strident nationalism, not less. Unfortunately, it isn’t hard to picture a scenario in which a nationalist fervor sweeps across China, leading to escalation, miscalculation or an accidental conflict.

To minimize the likelihood of such crises, the United States should stay laser-focused on the rebalance to Asia, shirking peripheral entanglements and assuring its allies in the Asia-Pacific that it is a reliable guarantor of their security. In addition, China and its neighbors should adopt more open lines of communication (i.e. more “red telephones”) to decrease the chances that potential crises escalate into full-blown military conflicts.

The prospects for peace in Asia are not promising. Indeed, whether China rises or falls, the most logical theories predict that conflict is likely, if not downright unavoidable. However, as University of Chicago Professor John Mearsheimer has noted, theories of international relations are still “rather crude instruments” and “even our best theories to explain the past and predict the future are limited.” Let’s hope he’s right.