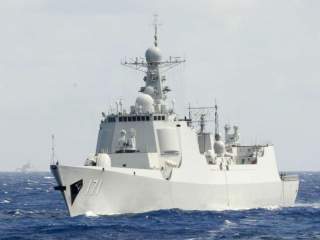 As the U.S.-China naval rivalry unfolds across the Asia-Pacific, Washington sails with significant confidence through these turbulent waters. After all, the U.S. Navy still far exceeds the Chinese Navy in gross tonnage, retains the advantage in key domains such as submarine quieting, has a huge network of bases, and possesses loyal, highly motivated and strong allies to boot. Still, as this Dragon Eye column has pointed out in several instances, Beijing also has some reasons for confidence in this nascent rivalry.

With respect to the territorial disputes on China’s maritime flank, the People’s Liberation Army (PLA) has an enviable level of strategic focus, but far and away its most important advantage is its favorable geography. That is to say that Chinese military planners enjoy the potent benefit of interior lines in almost any conceivable military scenario versus the United States. “Interior lines” is just a fancy way of saying that China can bring much more firepower to the fight much faster than the United States, at least in the initial phases of any military contest.

For these basic reasons, Western defense analysts should avoid being dismissive of emergent Chinese naval capabilities, even if the Chinese navy remains smaller and less experienced. It seems likely, moreover, that Beijing has indeed stepped up the pace of its naval building program, perhaps in part as a strategy to keep its shipyards humming at a time of contracting commercial orders. Indeed, Chinese shipyards do tend to build commercial and military vessels side by side in the same yard—a rather different model than the one employed by Western shipbuilders.

Just over a decade ago, Western naval analysts (including this one) marveled over the PLAN’s new “Red Aegis” Type 052C destroyer, the first Chinese warship to wield both phased array radars and vertical launch systems (VLS). Today, an improved variant of that ship, Type 052D, is in serial production, predicted to run to between eight and twelve hulls. This Dragon Eye will not focus on that impressive vessel, but rather will peer into the future and look at the ominous “dreadnought” on the horizon, China’s Type 055 cruiser, which is currently in development.

Some further hints about the mysterious behemoth, suggested as 11,500 tons fully loaded, were revealed in the Chinese magazine Shipborne Weaponry (舰载武器), published by a Zhengzhou institute of the China Shipbuilding Industry Corporation (CSIC). According to this description, which includes several rather detailed line drawings, the ship is projected to be 175 meters in length and twenty-one meters wide, with a draft of 6.5 meters and a top speed of thirty-two knots. The ship will wield four types of “new-type” (新型) missiles (discussed below), but that arsenal does not even account for the “long-range land attack cruise missile” (远程对地巡航导弹) and “sea-based missile interceptor” (海基反导导弹). In addition to electric drive propulsion, this analysis boasts that the the all-important phased array radars have been upgraded to include both X-band and S-band arrays—and thus may be on part with America’s top air-defense ships. This analysis holds that 055’s larger displacement will enable “larger weapons magazines and enhanced combat potential, so that its distant seas comprehensive fighting power will be much stronger” than its predecessors.

The article states directly both that Type 052C and D destroyers were constrained in their size by propulsion issues, and that engines for large surface vessels have formed a major technical bottleneck for the Chinese Navy. An interim step in the development process was the “indigenization” (国产化) of the Ukrainian GT25000 that resulted in the apparently “stable, reliable … [and] fuel-efficient” Chinese QC-280 gas turbine engine. Speed, acoustic and efficiency gains from electric propulsion are noted and the analysis goes on to claim that a major research “breakthrough” on this technology was accomplished by Wuhan shipbuilding research institute 712, so that by 2012, electric drive was already being incorporated into various Chinese prototype vessels, including non-naval platforms.

However, it is not really a possible propulsion innovation that makes this ship especially interesting. Obviously, the sensors (radars) deliver the ship’s core competence. Like the Aegis-equipped destroyers that formed the model for its predecessors, Type 055’s main mission is still certain to be fleet air defense, including for Beijing’s nascent carrier battle groups. The phased array radars on the Type 052D are said to be 15 percent larger and less rounded than 052C, delivering detection ranges not less than four hundred kilometers. Dual band radar technology, the article explains, was pioneered in the United States during the 1990s and originally planned for installation aboard the Ford-class aircraft carrier, as well as the recently unveiled DDG-1000. However, DDG-1000 did not get the system because of cost constraints, according to the Chinese analysis. Visible in the given diagrams of Type 055 are both the S-band radar (under the bridge and facing forward) and also the X-band arrays that are somewhat smaller and located in the middle of the large mast, but this may not constitute a genuine “dual-band” capability as the radars are not combined. Notably, the same drawings show a very prominent “fixed long-range warning radar” (固态远程警戒雷达) mounted above the helicopter hangar near the stern. The article claims that any further deficiencies with respect to radar are related to cost savings, and that China “will not confront a gap in radar capabilities or function.”

As to weaponry, the Type 055’s large cruiser dimensions are said to allow for ninety-six VLS launchers, up from sixty-four on the 052D destroyer now in production. Its large size allows not only for more weapons, but also for larger-dimension missiles, as this analysis states explicitly that a drawback of the current 052D VLS is that it cannot accommodate missiles longer than seven meters. In addition to the “long-range land attack cruise missile” and “missile interceptor” mentioned at the outset of this article, the other weapons that will likely be loaded into these VLS tubes, include a “new-type medium-range air defense missile” (新型中程舰空导弹), a “new-type medium-range antisubmarine missile” (新型中程反潜导弹), a “new-type long-range air defense missile” (新型远程舰空导弹) and “a new-type supersonic long-range antiship missile” (新型超音速远程反舰导弹). Interestingly, among the mission areas mentioned for Type 055 beyond air defense is not only missile defense, but also “antisatellite” (反卫星) operations. For close-in air defense, the ship is said to be upgraded with a new close-in weapons system (CIWS) that fires 9,600 rounds per minute—twice the rate of the former Chinese CIWS. Another interesting feature of the large design, of course, is the relatively expansive helicopter hangar. However, the helicopters illustrated in the design drawings feature the Ka-28 (an import from Russia) as well as the new Z-20 (a Chinese copy of the SH-60 now in development that I have written about in another Dragon Eye column), but not the larger Z-18AF that some had expected to see. However, one weapon that the Chinese analysis cautions will all but certainly not appear on Type 055 is an “electromagnetic gun” (电磁炮).

For readers following the progress of the U.S. Navy’s new cruiser DDG-1000, this last point may be read as an intentional dig by the Chinese side. Indeed, the DDG-1000 is notable for its new gun systems and has been described as optimized for supporting Marines fighting ashore with rapid, long-range gunfire. Pitting the projected Type 055 design against DDG-1000 may well be like comparing apples and oranges, to be sure, but as my colleague James Holmes has recently written in this forum: “The DDG-1000 will find itself sorely outranged by the missile-armed submarines, warplanes and surface combatants that comprise the core of naval fighting forces around the Eurasian perimeter. Chinese or Russian forces can blast away from beyond the reach of American guns or missiles.” Indeed, DDG-1000, together with the Littoral Combat Ship (LCS), currently lacks for suitable antiship cruise missile (ASCM) armament. Perhaps this explains why the USN is only building three of the DDG-1000. Chinese naval planners do not consider ASCMs as an afterthought in surface fleet development.

To be sure, many Western strategists will rightly note that Type 055 could be quite vulnerable to American and allied submarines. But if Beijing is investing in such large surface combatants, it suggests Chinese strategists are reasonably confident the Chinese Navy can protect them and, moreover, that these new “dreadnoughts” with Chinese characteristics could play a key role in the evolving naval balance in the Asia-Pacific.