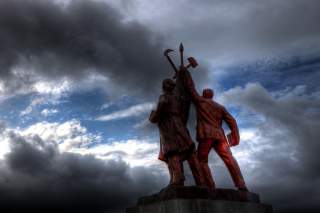 With the news that President Park Geun-hye’s Saenuri Party has gained a comfortable majority in the South Korean National Assembly following the July 30 by-election, there will no doubt come some optimism over the greater flexibility the president can now exercise in executing key initiatives—such as engagement with China on North Korea.

Chinese president Xi Jinping’s early July visit to South Korea marked three key firsts: the first time Xi Jinping had visited South Korea as president, the first time he had visited only one country during an official overseas tour, and also the first time a Chinese leader had chosen to visit South Korea before even considering a similar visit to North Korea; this has already renewed speculation that it is part of a much broader shift in Chinese policy towards the Korean Peninsula. However, despite the perception that China may come into closer alignment with the United States and South Korea on North Korea, the truth is far from simple.

Moving forward, all optimism must be tempered by caution based on a realistic assessment of the Asia-Pacific status quo; the regional order underpinned by the Cold War era, U.S.-led alliance system, which has brought peace, stability and even prosperity but, for example, at the expense of a divided Korean Peninsula. Given the sizable risks that entail any change to such an entrenched system, closeness to Beijing alone will not prove sufficient in addressing the North Korean nuclear issue; it will require taking the hard road of changing Chinese strategic calculus.

2013 was a tumultuous year for Chinese-North Korean relations, arguably the most since normalization of relations with South Korea in 1992. Despite its much touted “lips and teeth” camaraderie, it is clear that the multiple instances of provocations throughout the year have tested the limits of the bilateral relationship. Perhaps unsurprisingly, there has been serious debate within both the Chinese academic and policy community to recalibrate China’s North Korea policy. This frustration was famously punctuated by remarks made by President Xi Jinping during the April 2013 Boao Forum for Asia in Hainan. The President warned that “No one should be allowed to throw a region, or even the whole world, into chaos for selfish gains.” Although no party was directly named, the timing of the rebuke was widely interpreted as a veiled warning to North Korea.

However, though President Xi’s comments in Hainan left the impression for some that North Korea had finally drawn the proverbial “last straw” and pushed China closer to South Korea, Sino-North Korean relations remains largely unchanged. In fact, even with the execution of key China interlocutor Jang Song-thaek, Chinese engagement and investment remains strong, punctuated by major infrastructure projects amounting to even hundreds of millions; key examples include a US$21.9 million Tumen River bridge connecting the Chinese city of Tumen with the North Korean city of Chongin and the much larger US$365 million Yalu River Bridge connecting the important Chinese border city of Dandong and the North Korean city of Sinuiju.

Beijing has clearly shown the intent to follow a path of balancing relations with both Koreas; deeper engagement with the South and maintenance of normal relations with the North. The reasoning for this, despite the aforementioned growing tension with the North, boils down to strategic calculus. In the face of a regional assessment that likely supports the maintenance of the status quo, there will no doubt be erring on any choice that could do otherwise. That is not to say this choice will not face some rancor from both the United States and South Korea, particularly with the latter pursuing improved relations in the belief that it will help ease the course of unification. However, when being completely objective, any resistance to China’s policy choice will likely stall, given that the status quo favors all in the region.

Towards a New Strategic Calculus

If the U.S.-led regional order of the Asia-Pacific can be described in any way, it is akin to a “patchwork quilt.” Though the system provides considerable benefits to all its participants, constant is the struggle to check the underlying tensions that risk its integrity. To continue with the metaphor is a description of North Korea as the proverbial “loose thread.” It is completely within the power of China, the United States and South Korea to “pull” said thread, but the question thereafter becomes “what next?” China has likely correctly assessed that the United States will not risk major shifts in the status quo and has no alternative in the event it occurs. This rationale is difficult to resist, but its premise is based on a major misconception.

The aversion to taking action that could potentially upset the status quo is understandable. However, the reality is that it is occurring beneath the surface regardless. Among the most interesting things to come out from the classic by Don Oberdorfer, The Two Koreas, is a phrase that was oft used by the staff of General Gary E. Luck, former Commander of U.S. Forces Korea (USFK), to describe the creeping increase in North Korean forces along the Demilitarized Zone (DMZ). Incremental normalism can also be used to describe the creeping development of North Korea’s nuclear capabilities to the point that its very existence has become a de facto norm. Overall, an inexorable reality of a nuclear-armed North Korea is in essence an acceptance of a new dynamic that fundamentally undermines the stability of the U.S.-led status quo.

The year of 1992 highlighted that China is capable of accepting and adapting to considerable shifts to both the regional and international order. Following the collapse of the Soviet Union, and to North Korean displeasure, China formally recognized South Korea. If anything, the 1992 normalization highlighted that when faced with particularly disadvantageous circumstances, China will heighten its pragmatism. Therefore, if the United States and its allies truly desire a resolution to the North Korean nuclear issue, as well as a less opaque and more proactive China, they will need to convince the latter that the acceptance of a de facto North Korean nuclear state constitutes a strategic shift that doesn’t just pose a disadvantage, but a critical one that has fundamentally changed the regional status quo upon which it benefits.

But key criteria must be achieved before undertaking such an endeavor by the United States and its allies. First, they must articulate a regional model that will convince the Chinese to help “pick the thread.” It is unlikely that a geostrategic shift with the same theatrical scale of the Soviet collapse will occur in the near to midterm to help expedite a change in Chinese strategic calculus. In light of this, it will take considerable work to convince the Chinese that the long-term costs associated with maintaining the current modus operandi will be higher than the short-term ones associated with change.

Second, and most importantly, the United States and its allies must also be willing to convince themselves of the necessity of the costs associated with achieving denuclearization. One cannot understate the potential harm that is associated with change to the status quo. The U.S.-led order has been the foundation for regional economic prosperity and stability for at least the last fifty years; change, no matter how well planned, brings with it both tumult and even violence. However, if the goal of long-term security through a denuclearized North Korea is worth achieving, accepting the stakes and costs associated is important not only to internalize and prepare, but to convince the Chinese to do the same.

Andrew Kwon is a Michael and Deborah Thawley Scholar in International Security at the Lowy Institute for International Policy and Non-Resident James A. Kelly Fellow in Korea Studies at Pacific Forum CSIS.

Andy Lim is a Researcher in the Office of the Korea Chair at the Center for Strategic and International Studies. The opinions expressed are their own.