Can Congress Stop China in the South China Sea? 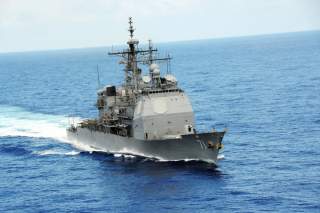 The balance of power in Asia is changing—and not in Washington’s favor.

No longer can the United States count on simply massing forces Gulf War I style and quickly coming to the aid of its allies if combat ever commenced on the Korean peninsula, in the East China Sea, around Taiwan or in the South China Sea—all thanks to China’s massive military buildup and growing anti-access/area-denial capabilities. The Obama Administration is quick to point out America is “pivoting” or “rebalancing” to Asia—maybe one of the most “sticky” foreign policy slogans in the last twenty five years. But catchphrases can’t change the facts and many would argue the pivot remains only a slogan when we take a hard look at facts on the ground. China is not only altering the status quo on land but on the water, in the sky, in space, and maybe even in cyberspace too.

While the Obama Administration would likely rather continue its present strategy of trying to engage Beijing and work towards some sort of “new type of great power relations,” it appears a group of lawmakers are working towards pushing the administration to consider a different approach. Such an approach would likely engage Beijing on a whole range of Indo-Pacific issues—with a specific focus on the challenges in the South China Sea. While it is certainly early days to judge any immediate impact this notable bipartisan effort may have on Administration policy one thing is clear: they certainly know the issues at hand and may be able to offer sorely needed guidance when it comes to the various challenges Washington faces in Asia. At the very least they could help place sorely needed attention such issues sometimes miss in major media outlets.

In a letter released late Thursday addressed to Secretary of State John Kerry and Secretary of Defense Ashton Carter, Senators John McCain and Jack Reed (Chairman and Ranking Member of the Senate Armed Services Committee) along with and Senators Bob Corker and Bob Menendez (Chairman and Ranking Member of the Senate Foreign Relations Committee) press the Secretaries for “the development and implementation of a comprehensive strategy for the maritime commons of the Indo-Pacific region.”

At a time when it would be easy for ranking member of Congress to focus on hot button and worthy issues such as the rise of the Islamic State, Russia’s moves in Ukraine and the ongoing defense-budget battle, taking on the challenge of Chinese moves in the South China Sea is something Asia hands should applaud. While all might not agree with the tone of the letter nor its recommendations—the focus on issues in the Indo-Pacific and the world’s most important relationship in that of the United States and China is key. As the Senators explain:

The South China Sea is a critical maritime highway through which some $5 trillion in global ship-borne trade passes each year. Unilateral efforts to change the status quo through force, intimidation, or coercion threaten the peace and stability that have benefited all the nations of the Indo-Pacific region. China’s land-reclamation and construction activities on multiple islands across the Spratly chain, and the potential command and control, surveillance, and military capabilities it could bring to bear from these new land features, are a direct challenge not only to the interests of the United States and the region, but to the entire international community.

Here is the real kicker. It seems China’s island building projects in the South China Sea are moving at a very rapid pace—maybe much faster than many analysts have realized:

It is our understanding that the majority of this work has been completed in the past twelve months alone, and if current build-rates proceed, China could complete the extent of its planned reclamation in the coming year. Gaven Reef has 114,000 square meters of new land since March 2014.  Johnson Reef, which was previously a submerged feature, now stands as a 100,000 square meter “island.”  Construction and reclamation has increased Fiery Cross in size more than 11-fold since August of last year. Reclamation by any state to enhance their sovereignty rights in the South China Sea complicates these disputes and runs contrary to calls from the United States and Association of Southeast Asian Nations (ASEAN) for parties to exercise self-restraint. However, while other states have built on existing land masses, China is changing the size, structure and physical attributes of land features themselves. This is a qualitative change that appears designed to alter the status quo in the South China Sea.

The Senators then go on to point out the challenges this creates in the U.S.-China relationship but offer their own recommendations:

Like President Obama, we believe China can and should play a constructive role in the region. We also acknowledge that the costs of seeking to shape China’s behavior in the maritime commons may affect other elements of our bilateral relationship.  But if China continues to pursue a coercive and escalatory approach to the resolution of maritime disputes, the cost to regional security and prosperity, as well as to American interests, will only grow. For the international community to continue benefiting from the rules-based international order that has brought stability and prosperity to the Indo-Pacific region for the last seven decades, the United States must work together with like-minded partners and allies to develop and employ a strategy that aims to shape China’s coercive peacetime behavior.

There is no doubt that the United States must continue to sustain a military balance in the region that secures our long-standing political and economic interests, upholds our treaty commitments, and safeguards freedom of navigation and commerce. At the same time, China’s deliberate effort to employ non-military methods of coercion to alter the status quo, both in the South China Sea and East China Sea, demands a comprehensive response from the United States and our partners. While administration officials have highlighted various speeches and initiatives as evidence of a broader strategy, we believe that a formal policy and clearly articulated strategy to address these forms of Chinese coercion are essential.  That is why the National Defense Authorization Act of 2015 includes a requirement for a report on maritime security strategy with an emphasis on the South China Sea and East China Sea.

A comprehensive strategy to raise the costs when it comes to Chinese coercive actions in the South China Sea is sorely needed. As Beijing continues to press ahead in reclaiming and essentially building new island features in the South China Sea a dangerous trend is literally being cemented—one in which China can change the status quo while its neighbors, many of which are U.S. allies, can do nothing about it. If Beijing were to declare an Air Defense Identification Zone—as the Senators touch on in their letter—in the South China Sea such a move would be highly destabilizing for the region and likely raise tensions to levels of not seen in decades.

So what would a comprehensive strategy to shape Chinese coercion look like in reality? Well, for starters, Washington must ensure the defense budget is not under the constant threat of sequestration. While America is sapped of its financial strength when budget deficits pile up year after year Washington must ensure we are giving our men and women the tools and resources they need to defend our legitimate national interests. America is literally sending an open invitation to our competitors in various regions to create instability when we operate from a position of military weakness thanks to the self-inflicted wound of sequestration.

Another element must include a much more strategic mindset when it comes to dealing with Chinese actions. For example, as I have noted before on these vary digital pages, if Beijing were to make a move such as reclaiming a new island or building new island features in the South China Sea Washington must work to show that there will be a cost every time Beijing acts with ill-will. So, if Beijing were to reclaim a new island, Washington would respond by sending new weapons platforms to the Philippines or Vietnam—maybe even sell new weapons platforms to Taiwan who would be in a desperate situation if Beijing ever tried to reclaim the island by force. The idea here is easy to understand: China must learn quickly its actions to undo the status quo will come at a high cost. And consistency is key. Beijing may think such an action is just a one off. We will need to show our resolve if China consistently challenges the status quo with reinforcing actions that raise the cost of Chinese coercion.

One other possibility is to consider the recent photos released by CSIS here in Washington and IHS Janes that showed in brilliant detail the pace and scope of Chinese island reclamation projects in the South China Sea. This focused the media and the national security community to shine a bright light on these issues in a crowded news cycle. It should be the policy of the U.S. Government to release such photos on a regular basis to keep the pressure on Beijing. For example, if there is any video of the USS Cowpens incident—when a Chinese vessel came dangerously close to colliding with a U.S. naval vessel—it would be good to release it. While a shaming strategy can’t change facts on the ground, if we recall when the U.S. and Japanese Governments released photos of near mid-air collisions with Chinese planes over the last several years it forced Beijing to respond. Keeping the pressure up in the media is key.