Can Cuba Change after the Castros? 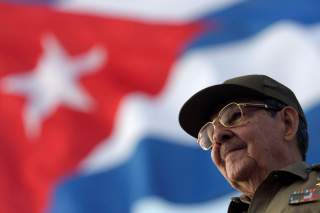 Raúl Castro is expected to step down as Cuba’s president Thursday, though the eighty-six-year-old will maintain his position as the head of the armed forces. This will be the first time since 1959 that a Castro family member will not head the Caribbean nation. Despite the excitement over this change of chief executive, Cuba has not entered a period of great change—at least not in the short term. Indeed, Cuba’s next leader, Miguel Díaz-Canel (currently the first vice president, aged fifty-seven years), is likely to maintain the status quo, with a few changes around the edges. The problem, however, is that the Cuban economy is not in great shape, and there are no major foreign donors ready to step up and assume the financial burden of paying for the luxury of keeping “the revolution” alive, well beyond its shelf life of failed socialist experimentation.

There are a number of reasons why Cuba will not see any major changes any time soon. First and foremost, Díaz-Canel is seen as a Castro loyalist—a hard-liner. That implies resistance to the idea of introducing any major changes, even along the lines advocated by Cuba’s major trade partner, China. Even if Díaz-Canel is a surprise reformer-in-waiting, his confirmation by the National Assembly will also be accompanied by the appointment of a vice president and other senior posts, which are likely to go tried and true Castroites.

For the new president to assume real power, Díaz-Canel will have to consolidate his position with the country’s main political forces—the Communist Party, the armed forces and the Castro family. Although Raúl will no longer be the head of state, his influence will still be felt, especially considering his son Alejandro is an officer at the powerful interior ministry and his former son-in-law Alberto Rodriguez heads GAESA, the military-owned holding company that controls much of the island’s tourist business. For the new president to make any meaningful economic changes, he will need to have the Castros, as an empowered interest group, on board.

The new president also inherits a government, with few exceptions, dominated by inertia and conditioned to regard change as a negative. As political scientist Richard Feinberg noted in 2016 of this mind-set, “For over 50 years now—two full generations—Cubans have lived within the communist paradigm as interpreted by one charismatic leader whose personality was so strong, whose presence was so deeply felt, as to crowd out alternative scenarios. Continuity, not change, was the norm.” This partially explains why much of the government remains resistant to economic changes and is slow in bringing projects to fruition.

Key to the process of attempting to make Cuba’s economy work is the need to overhaul the state-owned enterprises, which dominate the island’s economic activity. It is thought that state-owned enterprises absorb one-fifth of the budget as subsidies. This remains a tremendous drag on the economy and state finances.

Another challenge for Díaz-Canel is Venezuela’s economic collapse; since 2014, this has left Cuba without a source of economic aid, which is critical for a government that has steadfastly refused to make the necessary reforms. At the same time, the tougher approach taken by the Trump administration has hurt the flow of U.S. tourists to the island (which peaked at 619,000 in 2017). Although there remain ways to travel to Cuba, the numbers fell off, though latest data indicate a recent marginal improvement. The Trump administration reversed some of the Obama administration’s policies to make certain that U.S. tourist dollars do not flow to the Cuban government, which is a major player in the tourist business (part of which is owned by the armed forces).

Growth prospects for the Cuban economy are not robust. In 2016, the economy contracted by 1.6 percent in 2016, and expanded by an anemic 0.9 percent in 2017. According to the United Nations’ Economic Commission for Latin America and the Caribbean, real GDP growth in 2018 is forecast at 1.0 percent, hardly enough to give the new leader a boost.

And Cuba has a debt problem. Although the Caribbean country has received some debt forgiveness, it still has more than $1 billion in unpaid commercial debt from the 1980s. Although there was debt forgiveness from a number of countries. Clearing up the remaining debt is crucial if Cuba is to regain access to international finance.

Díaz-Canel inherits a stalled economy, entrenched interests with a dysfunctional economic-policy bureaucracy, growing pension demands with an aging population, and a frustrated younger generation that is more aware of the outside world than those before. Many members of the more ambitious younger generation have left the island and are contributing to the economies of the United States, Canada, Spain and other Latin American countries.

One of the earlier tests for the new government should be tackling the foreign exchange system. This was discussed by Raúl Castro but never attempted. However, it would greatly simplify doing business in Cuba, as well as helping to reform the state-owned enterprises. As the Financial Times’ John Paul Rathbone has noted, “Currency unification . . . would help force that process, as multiple exchange rates within state enterprises mask chronic inefficiencies and fuel exchange rate arbitrage, and thus corruption.”

But this is where it becomes difficult for Díaz-Canel: a declining economic situation puts the government under pressure to do something. Yet there is the concern that currency unification would make evident the poor finances of many state-owned enterprises, force some of them to close or be merged, or compel job-force reductions. It would also put the new leader on a collision course with vested interests, which in the state-owned enterprises includes the powerful military.

Cuba’s small yet growing private sector would probably benefit from an overhaul of the state economic sector, but is not enough to pick up the slack in the labor force. The situation is not helped in that the Cuban authorities have a strong mistrust of the private sector and are resistant to the concept that a thriving business sector could pay taxes that could bolster state finances.

Economic conditions in Cuba are likely to get worse before they get better. Díaz-Canel is more likely to clamp down on the island, both politically and economically, to consolidate his hold on power. That will probably mean a curbing or halting of any economic reforms that are pro-business.

At the same time, Cuba still needs money to purchase its imports (including a high level of critical food imports). This could mean that it will seek greater assistance from China, which has already provided debt relief and trade finance. Beijing is frustrated by Cuba’s lack of progress on economic reforms, and thus far has demonstrated little appetite to provide the same largesse to the Caribbean country as did the Soviet Union during the Cold War and Venezuela from 2000 to 2014. This represents a major challenge for the incoming Díaz-Canel administration.

By week’s end, if all goes according to plan, the post-Castro era will have been realized in name. The reality is that the Castroite state remains very much intact, probably with little change in personnel. The problem is that the Castroite state as such—corrupt, dominated by entrenched interests and ideologically rigid—is failing in terms of the economy, which in times of uncertainty could result in social unrest. This is the last thing that Díaz-Canel wants, but his solution will be to clamp down with the expectation that police state tactics will succeed in holding his position and that of those around him in power. The challenge is that as time moves on, ongoing repression is not the answer to a stronger economy. Sadly the option to make those changes is not likely until more of the Castroite elite pass out of power. Díaz-Canel should take heed the words of Giuseppe Tomasi di Lampedusa in The Leopard: “If we want things to stay as they are, things will have to change.”