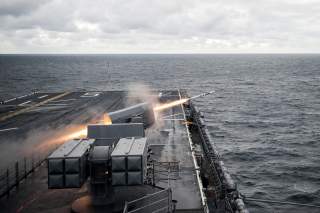 Donald Trump’s election has raised questions about the future of U.S. foreign policy—and perhaps nowhere more consequentially than for Sino-U.S. relations. During the presidential campaign, Trump focused most of his fire on China’s economic policies, but during the transition he has broadened his critique to include China’s military buildup and activities in the South China Sea, and he has called into question America’s long-standing One China policy. In light of these comments, it’s particularly timely to assess the state of the bilateral security relationship, and whether new developments warrant a fundamental rethink of our security policy toward China.

Many scholars and policymakers would agree. But while there is ample reason to be concerned about trends, we would contend that the state of U.S.-China security relations is a glass half full. It is important that both sides make maximum efforts to stabilize the security relationship, lest tensions in both the economic and security dimensions feed on each other, and the risks of rivalry and conflict deepen.

Until recently, there was considerable bipartisan continuity in U.S. policy towards the PRC. The pillars of this policy have included support for economic engagement and diplomatic partnership with China, combined with ongoing security commitments to regional allies, a capable U.S. military presence to back up those commitments, robust trade and investment relations, and involvement in range of multilateral institutions. This strategy served U.S. interests well for decades—helping pull the PRC away from the Soviet Union and thus accelerating the end of the Cold War. It also preserved security for Taiwan, Japan, South Korea and East Asia. The peaceful regional environment provided a context for China’s leaders to launch a strategy of “reform and opening up,” which lifted hundreds of millions of Chinese out of poverty and contributed to regional and global economic growth as transnational supply chains offered consumers lower prices for tradeable goods.

As the decades went by, however, this strategy produced other, more worrying consequences. China became the world’s top manufacturing nation and boasted the world’s second-largest economy. That status came with dramatic implications for jobs and investment, especially in the manufacturing sectors of developed countries—particularly the United States and Europe. Those developments gave China the wherewithal to field the world’s second most expensive military force, featuring a growing range of high-technology weapons, which now challenge America’s military supremacy in the Western Pacific. That burgeoning capability has been accompanied by an increasingly assertive foreign policy, particularly with respect to China’s territorial and maritime claims in the East and South China Seas. Taken together, the developments have led growing numbers of Americans to question whether China’s rise was of mutual benefit both on security and economic fronts. The tension in U.S.-China relations was exacerbated because the hoped-for political reforms, which were expected to follow the economic opening, failed to materialize. On the contrary, under President Xi Jinping, the movement toward a more open and rights-respecting China seems to have reversed course in favor of more central control and an assertive nationalism, which rejects what most people in the United States and countries around the world consider to be universal principles of human rights.

In response to those developments, President Barack Obama elaborated an approach to China that responded to China’s actions while preserving the basic framework of the One China policy—an approach which has been called the Asia-Pacific rebalance or pivot. The rebalance focused not only on security, but also broader economic and political issues as well. It has been generally well received among American strategists and leaders of both parties, and among American allies in Asia as well. Yet the new approach has not, by itself, stabilized the Sino-U.S. relationship. Many in China see the rebalance as thinly disguised containment, while critics in the United States fault the Obama administration for an inadequate response to China’s assertiveness—a critique reflected in the president-elect’s rather cryptic comments to date.

As we see it, the reality of Sino-U.S. relations since the launch of the rebalance is more complex.

If one dates the formal inauguration of the rebalance policy to former secretary of state Hillary Clinton’s Foreign Policy article on the subject in October 2011, followed by President Obama’s visit to Australia and the broader region in November of 2011, then the regional security situation involving China deteriorated in many ways in the following months and years. In April 2012, China moved military forces into position to establish control of the Scarborough Shoal. (In July 2016, the Permanent Court of Arbitration for the UN Convention on the Law of the Sea in The Hague ruled this action to be an infringement of the Philippines’ exclusive economic zone.) China also established a new administrative unit to oversee the Paracel and Spratly Islands of the South China Sea. China asserted an air-defense identification zone—without consulting other countries—in the East China Sea region in 2013. It moved oil rigs into Vietnam’s exclusive economic zone in 2014 and 2016.

Over the course of 2014–15, China used a massive system of specialized ships to reclaim more than three thousand acres (about five square miles) of territory throughout the South China Sea, turning seven land features into artificial islands capable of supporting aircraft and ships. President Xi promised, on a trip to Washington, DC in late 2015, not to militarize the artificial islands—but, in fact, the People’s Liberation Army had already placed some military aircraft, ships, radars and missiles on a number of them. Xi’s recourse was to blame the United States for militarizing the region first and encouraging provocative actions by rival claimants, including the Philippines and Vietnam, thereby justifying China’s actions as a measured response. Throughout this period, China continued to be ambiguous about the meaning of its claim that the so-called nine-dash line covered most of the South China Sea in a maritime zone of Chinese sovereignty.

China also increased activity near the Senkaku/Diaoyu islands in 2016 via Coast Guard vessels, fishing ships and even a Navy warship. This came after several years during which the situation there between Japan and China had remained tense but did not seem to be worsening.

Of course, from China’s viewpoint, a number of developments look concerning as well, feeding a narrative that the rebalance is really a thinly disguised containment. Chinese spokespeople argue that American freedom-of-navigation maneuvers using warships in the South China Sea are provocative, and that the ongoing U.S. military reconnaissance activities near China’s littorals violate China’s rights.

Even greater risks loom on the horizon. North Korea’s relentless nuclear and missile development poses a growing threat to the United States and its allies. Many in the United States point their finger squarely at China for failing to use its leverage with the DPRK and urge tough measures directed at China and Chinese firms. China, in turn, complains bitterly that the U.S.-South Korean deployment of the THAAD anti-missile defense system—ostensibly to counter North Korea—is really designed to weaken China’s security. If the new Trump administration ratchets up the pressure on North Korea, then a new crisis could emerge on the peninsula, which in the most extreme case could lead to a military conflict and even a clash between U.S. and Chinese forces. Meanwhile, the ever-sensitive Taiwan issue, dormant in U.S.-China relations in recent years, could reemerge as a result of the Trump administration’s possible rethinking of the One China policy. The recent transit of China’s aircraft carrier through the Taiwan straits could be a harbinger of even greater tensions to come.

Despite this litany of recent disagreements and fraught issues, the United States and China have, until now, managed to limit the scale of contention. None of these recent disputes have led to the exchange of gunfire or loss of life. Shipping lanes in the South China Sea remain open, as do air transit zones (even through China’s self-declared air-defense identification zone). Fishing fleets from all countries remain generally unencumbered in their access to almost all of the region’s waters. No country has used force to drive any other country off an island or other land formation, with the exception of China’s behavior towards the Philippines around the Scarborough Shoal. While China’s military modernization proceeds apace, we have not seen the triggering of a nuclear arms race—in contrast to Cold War U.S.-Soviet relations—or even recent Russian nuclear modernization. China has not followed up its provocative 2009 antisatellite test. Additionally, the United States has modified its contentious Air-Sea Battle concept to reduce the destabilizing perception that the United States plans a preemption strategy against China.

Clearly, there is much to address, and improve, in the U.S.-China relationship today. Moreover, we do not really know—and perhaps China’s leaders themselves don’t know—the nature of China’s long-term strategic ambitions.

At the same time, it’s important not to lose sight of the positive dimension—particularly given the all-too-frequent historical pattern of conflict between established and rising powers. Mutual interdependence and common transnational challenges have provided opportunities for cooperation, which have limited the extent of rivalry. From climate change, to Ebola, to Iran’s nuclear program, the United States and China have successfully worked together. Military-to-military dialogue has deepened, even as both sides question the purpose of each other’s military operations.