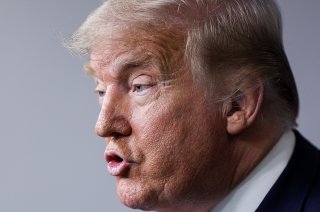 If former President Donald Trump decides to pursue the White House for a third time in 2024, then he’ll likely have to launch a presidential campaign without access to his digital sidekicks—Facebook and Twitter.

Facebook’s oversight board ruled last week that Trump would remain suspended from the platform for the foreseeable future and executives are reportedly mulling over whether to make the measure on the former president permanent.

But Twitter took it one step further. The company’s chief financial officer, Ned Segal, confirmed to CNBC in February that Trump is officially banned from Twitter.

The rulings by the major social media platforms puts the Republican Party’s kingpin in a tough spot to reach voters in 2024—a reality that already has GOP lawmakers and operatives feeling “panicked.” And Trump, who still holds an iron-like grip over the party for his commitment to shifting both congressional chambers red in the 2022 midterm elections, would have to ignite a potential White House run without access to Facebook’s massive fundraising abilities.

But the former president’s immediate response to the news didn’t indicate that he was concerned over the financial implications of being banned or temporarily suspended, though he did appear fearful over how he could rally support from voters without the ability to digitally communicate with them.

While Trump and other GOP lawmakers have expressed concern over the former president being blacklisted from Twitter and potentially Facebook, some Republicans said that Trump still has vast financial and political resources even without access to the two biggest social media platforms. Former House Speaker Newt Gingrich argued that the Facebook ruling would allow Trump to be seen as a tech “martyr.”

And some GOP groups, like the National Republican Senatorial Committee, have already taken advantage of the news, as the group launched a Facebook ad with the headline, “Big Tech Is Out Of Control.” The ad upholds Trump’s significance over the party, while also attempting to reach voters and draw in donors on a platform that the former president has no access to.

But with a rumored presidential primary playing field that has nearly a dozen GOP candidates, the social media ban and suspension could be damaging to Trump’s potential 2024 White House bid.

“It makes it more difficult for him and it gives everyone from Tim Scott to Nikki Haley to Mike Pompeo to Ted Cruz the ability to go out and begin to win over the Trump donors and voters that exist in a vacuum that Trump is not filling,” a top GOP operative told Politico.

Trump’s suspension from Facebook and Twitter ban came after the Capitol riots in January, which is when the former president was pressed for his involvement in inciting the violence among his MAGA following.

Trump has been looking into launching his own social media platform or using alternative outlets to connect virtually with voters, but the Trump operation has not committed to one publicly. A source close to Trump said the team was depending on getting back onto Facebook to reach his following.