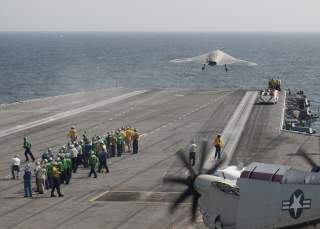 Since the time of American hegemony, aircraft carriers and their air wings have been used effectively to control the surface of the oceans and conduct strike operations. That time is over.

Today, U.S. Navy carriers’ capability to conduct the strike mission is still excellent. They have been invaluable in supporting the projection of power ashore in limited conventional and unconventional campaigns. But why do American citizens hand over their hard-earned money to buy carriers? Not to drop bombs on insurgents, but to violently wrest control of the sea from any state that decides to tilt with our navy.

While supporting power projection ashore is a carrier’s most frequent mission, the more important mission will always be sea control. The United States has not had a serious rival for control since the 1940s, when naval warfare was aircraft dominant. Since then, missile technology has continued to become cheaper, more accurate, greater in range and more widely employed. Not only is naval technology changing, but adversary intent is also evolving. Russia, Iran and China plan to contest sea control at the operational level, threatening how the U.S. Navy does business.

Asking “where are the carriers?” when a crisis arises will be less and less relevant if the Navy doesn’t catch up to the missile-dominant battlefield. As it currently stands, carriers are far too vulnerable to steam into potential hotspots like the Baltic Sea, Strait of Hormuz or Taiwan Strait. By holding our most powerful vessels at great risk, our opponents are able to push our strongest capabilities out of optimal range, greatly degrading our naval deterrent.

The solution for sea control is not necessarily to replace the carrier, but to make it relevant to the age of the missile salvo. We need a system that is more difficult for our adversaries to target, has greater range than opposing weapons systems and adds redundancy to a fleet of only ten carriers.

A swarm of unmanned vehicles fits the bill. This family of weapons would come in four distinct types, each with a specific task: Control, Identify, Fire and Resupply.

Control units would be where humans interface with the swarm. A swarm control unit should be able to be installed in an aircraft carrier, an aircraft, a ground command post or in its own vessel. Multiple nodes of control aboard multiple platforms will prevent our enemies from targeting a single point of failure in order to shut down the swarm. All of the already existing targeting intelligence created by the military should be easily receivable by these control units, allowing them to pass off targets for strike.

Identify units would act as the swarm’s organic intelligence assets. In the air and on the sea, these unmanned autonomous units would collect information on enemy targets in the air, surface and subsurface, and then send the locations back to control units or directly to fire units. To extend range, any unit within the swarm should be able to act as a communication relay, so that critical information gets back to a control unit where a human can make decisions.

Fire units would be primarily floating or submerged vessels containing long-range and highly accurate antisurface and antiair missiles. Think of multiple submersible missile pods loitering in the sea until called upon by a control unit to break surface and fire. Once technology matures, fire units could also take on the sub-hunting role.

Resupply units would be responsible for autonomous reloading of the fire units at sea in the most efficient manner possible. The Marine Corps adopted this concept on land with K-MAX, an autonomous resupply helicopter that hops from outpost to outpost, delivering supplies continuously day and night.

This swarm of naval drones would be exceedingly difficult for our adversaries to detect and degrade, with each constituent part being relatively inexpensive. The swarm units would be small and potentially submerged, making them very hard to find. Cheap decoy units with realistic signatures could be employed, soaking up enemy munitions. The authentic units the enemy manages to destroy will be easily replaceable, as each unit would be plug-and-play with the larger network.

For sea control, an aircraft carrier operating a drone swarm would provide the overmatch that the U.S. Navy seeks. The carrier can use the extreme range of the drone systems to stay in relative safety, while fire units tear holes in both the enemy’s Intelligence, Surveillance and Reconnaissance network and its missile network. Carriers and amphibious vessels could then exploit these holes to deliver the short-range bloody grind of air sorties and assaulting Marines.

Currently equipped, carriers are too short-ranged to credibly deter our rivals at sea. They may even provide an incentive for opponents to strike first, as flattops are a relatively large target and the psychological impact of sinking one at the onset of a conflict would be considerable.

The platform-agnostic naval drone swarm would disaggregate the bulk of the Navy’s hurting power, which is currently tied up in the increasingly vulnerable carrier air wing. Instead of throwing gobs of money into missile defense to keep the carrier afloat (and being on the wrong side of the cost curve), Navy planners should be on the offense, looking to fire missile salvos from the swarm.

Robert Allison is a Marine Officer and currently a student at the George H. W. Bush School of Government and Public Service at Texas A&M University. The views expressed in this article do not necessarily correspond to those of the U.S. government.