Can Egypt Handle the Summer "Heat"? 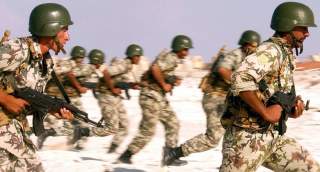 Ramadan begins this year on June 28. Six weeks later—August 14—is the one-year anniversary of the Egyptian government’s crackdown on Muslim Brotherhood supporters in Cairo’s Rabaa al-Adawiya Square, killing at least 683 people in a single day.

Late last year, the government designated the Brotherhood a terrorist organization after an attack on a Nile Delta security directorate that killed sixteen (never mind that the attack was perpetrated not by the Brotherhood, but the Sinai-based group Ansar Bayt al-Maqdis). Since February, however, violence between Egypt’s two warring camps has remained on a relatively low flame, with monthly death tolls at under ten a month—no picnic, of course, but less than mass murder.

As the summer approaches, things are bound to heat up again, and the government is taking no chances. In March, Egypt’s judiciary sentenced 528 people to death; last month, it sentenced another 683 to the same fate, including jailed Brotherhood chief Mohamed Badie.

Meanwhile, an insurgency rages in the Sinai Peninsula, where radicalized local Bedouins appear to be teaming up with foreign extremists to attack Egypt’s U.S.-allied ‘apostate’ government, as well as Israelis across the border and Western interests, like the Suez Canal.

A new Henry Jackson Society report I coauthored with my colleague Emily Dyer shows that Al Qaeda ideology is making inroads in the peninsula, and that armed groups there are adopting more sophisticated and organized ‘Al Qaeda-style’ attacks. More worrying still, while violent attacks were once limited to the Sinai itself, this year has seen a rise in terror on mainland Egypt. As the violence approaches Egypt’s population centers in Cairo and the Nile Delta, groups based both in the Sinai (Ansar Bayt al-Maqdis) and the mainland (Ajnad Misr, or “Egypt’s Soldiers”) have claimed responsibility.

For their part, authorities have laid the blame squarely at the Brotherhood’s feet: “Call it Ansar Bayt al-Maqdis, call it Ajnad Misr; either way, it is a Muslim Brotherhood militia,” Egypt’s interior minister said last month.

The Brotherhood is, without a doubt, an illiberal, theocratic movement opposed to women’s and minority rights. It has urged its followers to view themselves as “masters of the world” whose goal should be “destroying the Western civilization from within and 'sabotaging' its miserable house.”

Still, for the sake of Egypt’s stability, the answer is not mass-execution sentences.

For one thing, links between the Brotherhood and armed terror groups remain murky. While Ansar Bayt al-Maqdis (also known as Ansar Jerusalem) have conducted dozens of attacks since 2011 in Sinai, mainland Egypt and Israel, only once has the group explicitly linked its attacks to grievances over the government’s crackdown on the Brothers. That said, it’s not inconceivable that Brotherhood elements have used information gleaned from the group’s short tenure in power—officials’ addresses, for example, or daily routines—to help jihadists on the mainland or in Sinai. At this point, however, there is no proof to that effect.

Second, the rulings against the Brotherhood were plainly a travesty of justice. One defense lawyer said the trial for the initial mass-death-sentence took just four hours, during which the judge refused to hear any arguments from the defense. The trial resulting in the second wave of sentences, he said, took five minutes.

Egypt being Egypt, there are no easy answers. The Brothers are a nonstarter—anti-Western, anti-Semitic, anti-Christian and antiwomen, with no answers to Egypt’s profound economic woes. The military regime appears a safer bet, yet it’s one not entirely comfortable for those of us who cherish democracy, freedom and human rights.

As for Egypt’s so-called liberals, they are sadly anything but. Hamdeen Sabahi—the only presidential candidate running against the military’s Abdel Fattah al-Sisi—is a radical-nationalist eager to pin blame on Egypt’s problems on everyone but Egyptians. Just last month, Sabahi’s spokesperson edifyingly told Hezbollah TV, “Our enmity with the Zionist enemy goes to our very existence. It's either us or them,” and that Cairo’s peace treaty with Israel is “the main reason for Egypt's subjugation to America, and for the decline in its role as an Arab, Islamic and African leader.”

Conspiracy theories about Jews and Americans are not generally the building blocks of liberalism. Predicting Egypt’s political trajectory is as tricky as prophesying London weather. Nonetheless, one forecast may be made with near-certainty: It will be a long, hot summer in Egypt, and the Nile will once again run red.