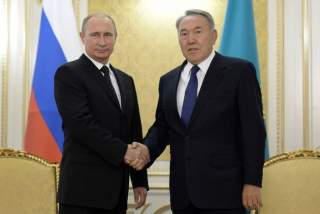 Cheaper oil, government interference and market dynamics jeopardize the future of Russian and Caspian energy. To be globally competitive, the big four Eurasian producers—Azerbaijan, Kazakhstan, Russia and Turkmenistan—should let the private sector play a greater role and make more decisions on commercial, rather than political grounds.

Eurasia is a hydrocarbon giant. Russia has the world’s largest reserves of natural gas, and is in second place in coal and eighth in oil. Russia produces almost one fifth of global gas, and the second largest amount of oil, after Saudi Arabia (and soon America). Nearly one third of oil and gas consumed in Europe comes from Russia. In the bountiful Caspian Sea region: Azerbaijan is a large and reliable supplier of oil and soon gas to Europe; Kazakhstan’s Tengiz field is the newest global "super-giant" to produce oil, and Kashagan is the largest oil field outside of the Middle East; and Turkmenistan has the world's fourth-largest reserves of gas.

Yet, the future of Eurasian energy is undermined by politics. Russia relies on a state-controlled gas export monopoly, Gazprom. Its output is stagnant, and Europe wants to move away from reliance on it. Due to oil-price-indexed contracts with European customers, Gazprom earnings will plummet. The company faces an EU legal challenge for anti-competitive business practices. Alternative gas markets in Asia are a decade away. Gas demand from Ukraine, once Gazprom’s largest customer, will decline. Subsidies for consumption are to be cut and Ukrainians are outraged at Russian aggression. Oil production by state-controlled Rosneft is at a peak by cannibalizing the producing assets of other Russian companies—but the company is troubled. It seeks some $40 billion in government aid. Several energy companies and banks that help finance them are under Western sanctions, making it hard to roll over large foreign debt or borrow for expansion.

Prospects for Eurasian energy are also clouded because governments use exports as cash cows to fund their budgets. Eurasian producers have failed to leverage two decades of energy earnings to institutionalize reform and invest in human capital and infrastructure beyond the sector.

For these reasons, Eurasian producers should move to boost their energy competitiveness through market mechanisms and use export proceeds to modernize their economies.

Eurasian governments ought to allow more scope for foreign and private energy companies. Major oil companies have shown the way. They run Eurasia’s most successful but difficult undertakings. Three are: the Exxon-led Sakhalin 1 oil project, which does deep drilling in extreme sub-Arctic conditions; the Chevron-led Tengiz oil project in Kazakhstan, which extracts oil below a deep salt dome in the world’s deepest onshore operation; and BP-led gas and oil projects in the Caspian Sea off Azerbaijan.

Government interference in the energy sector should be reduced. The Rosneft takeover of Yukos and TNK-BP assets has harmed productivity and financial transparency. For two decades, politics have buffeted Kashagan in addition to management and technical challenges; the project is still not operating. SOCAR, the state oil company of Azerbaijan, operates in a nontransparent manner; corruption flourishes in the petroleum sector. Energy in Turkmenistan falls under tight government control, with little transparency.

Eurasian governments should not overly tax energy. According to Russia’s finance ministry, in 2013, half of the federal government’s budget revenue came from export duties on oil and gas and taxes on mineral extraction. Rosneft is Russia’s largest taxpayer. In 2010, Kazakhstan raised oil export duties to help close a widening budget deficit. In Azerbaijan, oil and gas revenues represent over 60 percent of budget income. Using tax revenue to fund showy and corrupt real-estate and sports ventures is wasteful.

A wild card is Iran, which ranks just after Russia in oil and gas reserves. If a nuclear agreement were reached, Iran would return to the global energy market and stiffen competition against Eurasian energy.

As markets become more competitive, Moscow should reconsider the use of energy as a political weapon. It severely undermines Russia’s energy and economic interests. Moscow can take corrective steps.

First, become a reliable supplier. EU energy dependence on Russia has fallen to about 30 percent. This shift has been spurred by Moscow’s gas spats with Kyiv, which are propelling Europe to diversify its gas supply. Poland is buying liquefied natural gas from Qatar, and Lithuania has built a liquefied natural gas floating storage and regasification unit. Neither may be great investments from a commercial standpoint, but they are a hedge against Moscow’s use of gas supplies as a political weapon.

Second, allow commercial criteria to dominate decision making. South Stream, which was to have been a gas pipeline under the Black Sea to Bulgaria and beyond in Europe, made no economic sense. Export capacity to Europe through Ukraine already exists.

Third, accommodate EU rules. Moscow put many EU countries on edge with its attempt to upend anti-monopoly and competition rules so as to make way for South Stream.

Fourth, withdraw from the Donbas. The energy future of Russia will be in doubt if it does not obtain relief from sectoral sanctions. As West Siberian fields age, Russia must mobilize long-term investments for large opportunities, including in the Arctic. Occupying part of the Donbas blocks this.

Fifth, exercise caution in the $400 billion gas deal with China. It is to develop new Siberian gas fields and construct a pipeline to China. Last May, Putin flew to Shanghai to ink the deal when he seemed to be reeling from Western sanctions imposed following the seizure of Crimea. The return on investment of the China deal is not yet assured.

Sixth, look to shale. The Arctic, though important, will not save Russia’s energy sector at current prices; it is too costly and risky. Moscow should not ignore Russia’s substantial shale deposits as extraction costs decline.

Eurasian energy developments also offer lessons for Western policy. The emphasis since the OPEC oil embargo of 1973-74 on diversifying global sources of supply has proven wise. Western investments in Eurasian energy have reduced OPEC’s oligopoly market power. Likewise, Western encouragement of multiple export routes for Caspian energy has been far-sighted. The Baku-Tbilisi-Ceyhan pipeline for Azeri oil and energy pipelines from Kazakhstan and Turkmenistan to China have weakened the Soviet-era monopoly on export pipelines through Russia. Finally, the West was imprudent to champion, mainly for political reasons, the Nabucco gas pipeline from Turkey to Austria when gas supplies might not have justified it.

To prosper, the Eurasian energy sector must become more agile and efficient. This means removing politics from more energy decision making, and being clear-eyed about changing market forces.