Can General Kelly Save the Trump Presidency? 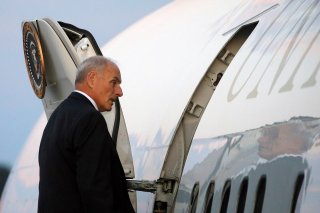 Editor's Note: In our latest Facebook Live interview (please like our Facebook page to see more of these events) Jacob Heilbrunn, editor of the National Interest, and Daniel McCarthy, editor-at-large of the American Conservative, discuss the potential impact of Trump’s new chief of staff.

Daniel McCarthy recently wrote an article on how and why Donald Trump has turned on Jeff Sessions. An excerpt of the article can be found below:

Donald Trump has a secret weapon. Even as controversies swirl around him like galaxies colliding, one scandal or outrage smashing into the next before the last one has fully sunk into citizens’ brains, Trump remains on his feet, defiant. He knows something his foes don’t know—or can’t admit. He knows that as low as he might go in the polls, his enemies are truly, comprehensively, utterly bankrupt in the public’s eyes. The American people may not like Trump, but they loathe the forces of respectability arrayed against him. The media? Congressional Democrats? The Republican establishment? With enemies like those, Trump hardly needs friends.

Which is a good thing, because the president does not seem too concerned about keeping the few political friends he has. His anger at Attorney General Jeff Sessions has been simmering for months, and Trump held nothing back in telling the New York Times exactly how he felt this week. He told the paper’s Peter Baker, Michael S. Schmidt and Maggie Haberman that he would never have put Sessions in charge of the Justice Department had he suspected that Sessions would recuse himself from the investigation into Russia’s involvement in last year’s election. Trump even said that Sessions had been less than forthright in explaining his own dealings with Russians. “Jeff Sessions gave some bad answers” during his Senate confirmation hearings, Trump told the Times. “He gave some answers that were simple questions and should have been simple answers, but they weren’t.” The words are a tangle; their meaning is clear.

Picking on Sessions, the first—and, for a long time, the only—Republican senator who had endorsed Trump’s presidential campaign, was an unexpected move for a president who had just seen his own party’s Senate fail to pass a major health-care reform he had called for. It was a surprising move, too, for a president who continues to face daily innuendo about his relationship with Moscow. Trump, it turns out, had a private powwow with Vladimir Putin at the recent G-20 meeting. And this week it came out that yet more dubious Russian figures were present at his son's meeting last year with a Moscow-connected lawyer who promised to share with the Trump campaign embarrassing information about Hillary Clinton. Sessions may have caused the president a headache by recusing himself from the Russia investigation. But Sessions is more than just a Trump loyalist, and one who happens to be the chief law enforcement official in the country. Sessions is also Trump’s link to the hard-line Republican Right that was Trumpian before Trump himself was. Sessions arguably outranks Trump himself in the hearts of Republicans who yearn to crackdown on immigration and demand tough “law and order” policies. Steve King, the Iowa Republican who is another hero to immigration restrictionists, swiftly took to Twitter to defend Sessions. Trump risks losing a critical part—the braced and dedicated ideological cadres—if he makes Sessions the scapegoat for his Russia frustrations.